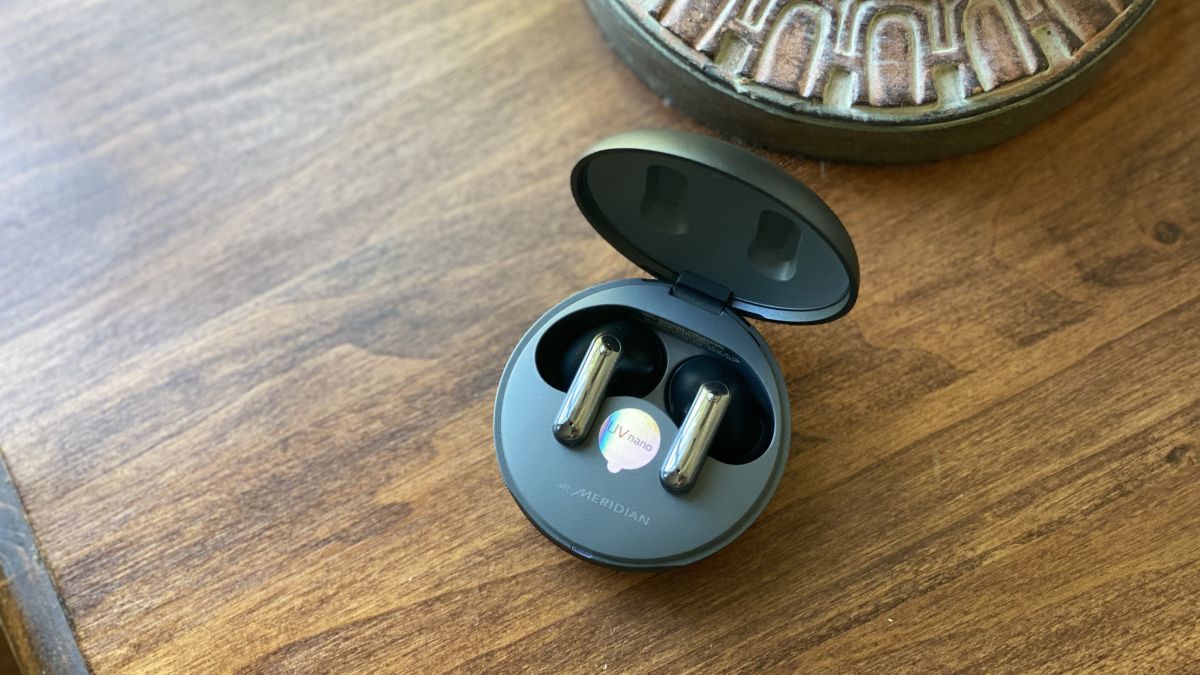 In its initial bid to create a pair of award-winning true wireless earbuds, LG didn’t have a whole lot of success – last year’s LG Tone Free HBS-FN6 didn’t exactly set the world ablaze with their pioneering UVnano technology and their audio reproduction was, well, not top-class.

Since then, LG’s gone back to the drawing board and has emerged with the new LG Tone Free FP8 that are genuine Apple AirPods Pro and Sony WF-1000XM4 rivals that offer active noise cancellation, aptX support for Android and improved sound quality. These are a significantly stronger pair of true wireless earbuds than we saw a year ago.

Having tested them over the course of a month, we had plenty of time to spend with them and while they didn’t ace all of our tests – particularly before we applied the latest software update – we can safely say that LG is delivering a high-quality pair of buds at a lower price point than Sony and Apple, even if they can’t quite overtake them in overall performance.

While we’d still recommend the aforementioned class-leading noise-cancelling earbuds over the LG Tone Free FP8, LG’s latest true wireless buds are a great alternative at a slightly lower price, and are a great option if you find the idea of freshly cleaned eartips appealing.

In the ultra-crowded true wireless earbuds market, that price is somewhat higher than average but still a significant amount less than other flagship buds from Apple and Sony. For reference, the AirPods Pro come in at $249 / £249 / AU$399, and the Sony WF-1000XM4 cost  $279 / £250 / AU$449. That means LG’s offering many of the same features at a fraction of the cost.

That being said, there are a few cheaper options that also offer active noise cancellation and great sound quality that are worth mentioning. Among them are the new Samsung Galaxy Buds 2 and Beats Studio Buds – they’re just a tad cheaper and we feel that they offer pretty much the same value as the LG Tone Free FP8.

In terms of design, the LG Tone FP8 borrows a few pointers from the Apple AirPods Pro. Both sets of buds use silicone eartips that fit snugly into the ear canal by way of an ear-conforming shell that extends out to a small nub that runs outside the ear. Aesthetically there are a lot of similarities – but not enough to make them exact replicas of one another.

One thing that separates them is the choice of cases – the AirPod Pro come in a rectangular-shaped case with rounded corners while the LG Tone FP8 have a circular case. They’re both small and fit easily in the pocket, but LG’s case has one trick that Apple doesn’t and that’s the ability to clean the eartips between uses with UV light.

According to LG, the case kills about 99.9% of bacteria on the earbuds between uses – which is kind of comforting if someone in your house, say a girlfriend, likes to borrow your earbuds without telling you and doesn’t ever clean them.

For us, the buds were perfectly sized, they fit in the ear snugly and created a perfect passive seal without any effort at all. In case you need a larger or smaller eartip, LG includes both in the box, but we’d wager most folks should be fine with the medium pair that comes attached.

Like the Tone earbuds before it, the FP8’s touch-sensitive controls are housed at the very top of the ear stems; you can use these to play / pause your music, adjust the volume, answer phone calls, and activate Ambient Sound mode, which allows some environmental noise to pass through the buds – it’s a handy feature if you need to quickly tune into your surroundings.

While the marquee features of the earbuds are their active noise cancellation and bacteria-killing UV light, those aren’t the only tricks up the FP8’s sleeve.

On top of everything else, the earbuds are IPX4 water-resistant that makes them fine companions for the gym or a light sprinkle and they offer upscaled spatial audio – similar in some respects to Creative’s Super XFi technology. We’ll get more into the weeds with that in a minute but the effects are fun… though maybe not as immersive as we’d like them to be.

The good news is that the buds support aptX – something that’s becoming harder and harder to find as more manufacturers try and implement their own high-definition codecs. Because aptX is higher than standard Bluetooth (SBC) in terms of bandwidth, you’ll get a more detailed and rich sound – but only if you’re using an Android device that supports aptX.

If you’re looking for customization options, you’ll find them inside LG’s Tone Free app. You’ll find an EQ balancer and controls setting, as well as an option to check for new updates – something we highly recommend you do before you put the buds through your own testing. The app is intuitive and easy to use, making it a lot better than some of its competitors.

So what’s the bad news? The LG Tone Free FP8 don’t come with a built-in assistant like the Apple AirPods or Google Pixel Buds. That’s not a deal-breaker, but it is certainly a huge convenience to just be able to say “Hey Google” to get your assistant’s attention at any place, at any time.

The one area the LG needed to improve was its audio reproduction – and with Meridian’s help it absolutely did. While previous versions of LG’s Tone earbuds had muddied sound, harsh trebles and a severe case of sibilance, the FP8 now have a more lively sound that really focuses on accentuating the mids and lows with better overall balance.

Unfortunately, though, there’s still a lot to ask for in terms of clarity – especially if you’re using the SBC or AAC codec – and width of the soundstage. Things are a bit better when you switch over to the aptX codec on Android that has a higher data bandwidth, but largely you’re stuck with the same smaller soundstage anywhere you go.

That’s disappointing because LG and Meridian set out to create the widest soundstage yet with their new Analogue Spatial Processing tech that simulates spatial audio. In theory this should take any source of audio and apply a 3D filter to it, but in practice it just makes the audio track sound more open and airy, but less refined. If you’ve heard Dolby Atmos in the past, you’ll know what immersive 3D audio sounds like and will recognize that LG’s not quite at that sweet spot yet.

As far as the noise cancellation goes, we were largely impressed with the LG Tone Free FP8’s performance. While they still can’t cancel out quite as much noise as, say, the Bose QuietComfort Earbuds, the LG Tone Free FP8 can eliminate a large amount of outside noise. With music playing, background conversations happening around you all but disappear, and using them with a lawnmower means a nearly quiet experience while out in the yard.

How they’ll hold up to higher decibel sounds like an airplane engine remains to be tested – another unfortunate downside of the ongoing Covid 19 pandemic – but so far we’ve been relatively impressed with the FP8’s noise cancellation chops next to our overworked air conditioner – the next best environment for a noise cancelling test.

Not only can the buds keep sound out, but if you press and hold the touch-capacitive panel on either earbud, you can turn on passthrough mode that pipes in outside sounds. Why would you want that? Well, that’s handy if you’re at an airport waiting for a call or need to have a quick conversation with someone and you don’t want to take out the earbuds.

Speaking of conversations, call quality is another soft spot for the FP8. Friends and family we spoke to said we sounded echo-y and less crisp compared to other earbuds, but said we came in louder than traditional speaker phone. The result makes us leery about using these as your go-to pair for business calls and are probably best suited for short phone calls when possible.

The other issue you’ll encounter is that the buds might drop the connection every so often. It happened less frequently after we updated to the latest software, but right out of the box the buds might cut out on you every once in a while should you choose not to update.

According to LG, you can expect 10 hours per charge in the buds and around 24 hours total for the case with ANC off. When it’s on, we got around 6-ish hours of battery life and 18 with the case, which feels like the going average for noise cancelling earbuds.

The case has a USB-C charging port on it and it also supports wireless charging if you have a Qi-enabled charging pad. Charging time is fairly quick, but definitely give yourself an hour or two before boarding a flight to have them fully charged.

Our biggest issue with the LG Tone Free FP8 is that its magnetic charging pins are a bit fickle. On at least one occasion, our earbuds didn’t charge because they lost connection with the pins in the case. In LG’s defense they are magnetized in order to prevent that from happening – but it still might and it’s a bit disappointing when it does.

Other earbuds might have better battery lives and charging times, but the LG Tone Free FP8 hit somewhere right in the middle of what we’d expect, which is absolutely fine.

You want decent, mid-range noise-cancelling earbudsWe still feel the Sony WF-1000XM4 are the best true wireless earbuds around right now, but the LG Tone Free FP8 are a decent contender for the crown. They’re more affordable, certainly, and offer many of the same features.

You want to keep bacteria off your budsThe one thing the LG Tone Free series does that no other earbuds do is that they offer an integrated UV light to kill bacteria in between uses. If you know someone that’s germaphobic, these could be the perfect earbuds for them.

You were disappointed with the original run of Tone Free earbudsThe FP8 feel like a huge step up from some of the first Tone Free earbuds we heard. They have a more balanced sound with higher clarity and less sibilance.

You’re willing to pay a bit more for better-quality budsFor Apple owners, the AirPods Pro remain one of the best options while Android owners will appreciate Sony or Samsung’s true wireless earbuds instead. The LG Tone Free FP8 are good, but definitely not class-leading in any category.

You’d like to have a built-in assistantIf you’re someone who likes to summon their assistant anytime, anywhere, these buds aren’t for you. Instead stick to the AirPods or Google Pixel Buds that offer an always-listening assistant who’s more than happy to help you out when your hands are full.

You’re not careful about putting the buds awayBecause the earbuds rely on three small metal pins inside the charging case, you need to be super careful when putting them away for the day. If they’re off by even a few millimeters, the buds won’t be charged next time you use them, and that can be a real disappointment.