Hamilton and Verstappen’s intense battle for the title took another frantic turnDuring lap 37 of the Saudi Grand Prix, the two championship rivals collidedVerstappen was adjudged to have overtaken Hamilton illegally to take the leadWhen ordered to give the place back, Verstappen slowed down in front of LewisHamilton had not been told about the Red Bull orders and clipped Verstappen

By Sam Mcevoy For Mailonline

Lewis Hamilton and Max Verstappen’s tense tussle for the Formula One title took another chaotic turn during the Saudi Arabia Grand Prix when the two collided after the Dutchman was ordered to give his rival the lead back after an unfair overtake.

A number of virtual safety cars halted Hamilton’s charge but he was soon able to attack Verstappen at turn one, with the Red Bull driver keeping the place but again running wide.

His team told him to give the position to Hamilton but, with the Mercedes set to pass, Verstappen slowed right down and Hamilton ran into the back of his title challenger, damaging his front wing and labelling Verstappen ‘crazy’ over the radio. 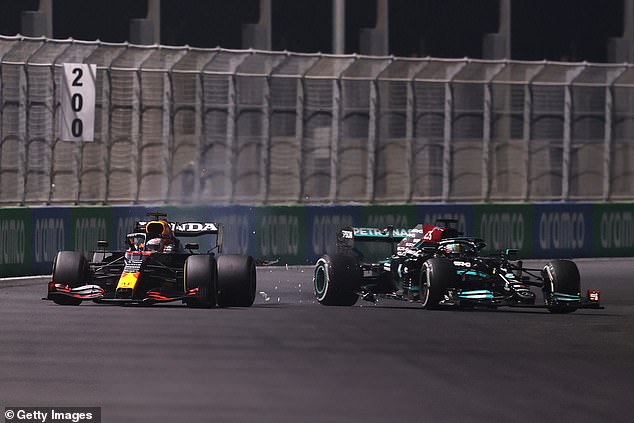 As Red Bull instructed Verstappen to give the place back, Hamilton hadn’t been relayed the message by Mercedes seeing him smash into the back of the Red Bull who has dramatically slowed down to allow the overtake.

A confused Hamilton, who was not made aware that Red Bull had instructed their driver to allow him to pass, claimed Verstappen had ‘break-checked’ him during the confusing scenes during lap 38 of the Jeddah race.

Verstappen was handed a five-second time penalty for initially gaining an advantage by cutting the corner, with the incident which saw Hamilton run into him being investigated after the race.

Hamilton sustained damage to his front wing as a result of the collision but was still able to nurse the car to the finish line on Sunday. 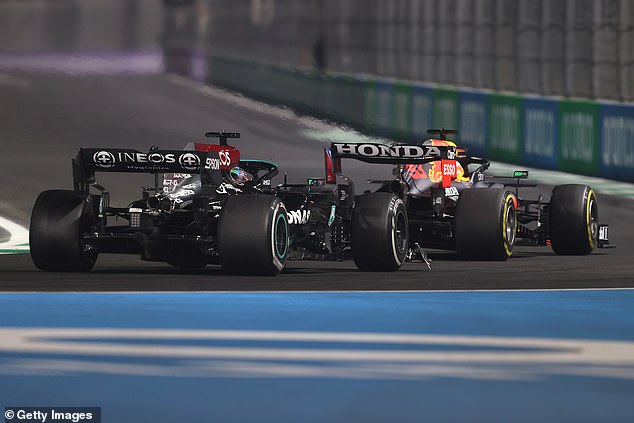 The Dutchman revealed afterwards that he was following instructions in letting the seven-time world champion by him so he could give the lead back.

‘It was quite eventful,’ said Verstappen. ‘A lot of things happen that I don’t fully agree with but it is what it is, I tried on track to give my all. Nevertheless, I was still second.

‘I slowed down. I wanted to let him by. I was on the right, and he didn’t want to overtake. And we touched. I don’t really understand what happened there.’

The Brit claimed he didn’t understand why Verstappen slowed down.

‘I’ve been racing a long time but that was incredibly tough,’ Hamilton said.

‘I tried to be as sensible and tough as I could be out there with all my race experience, keeping the car on track and staying clear, and that was difficult. 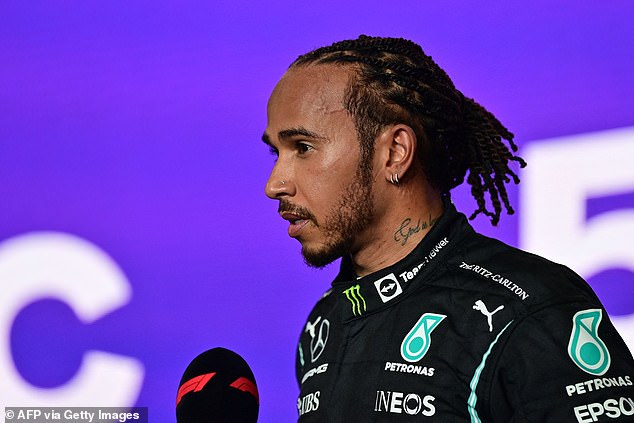 ‘We have had all sorts of things thrown at us and I’m just really proud of everyone.’

Hamilton’s opinion on the coming together with Verstappen differed to that of his rival, the British driver adding: ‘I didn’t quite understand why all of a sudden he hit the brakes pretty heavily and then I ran into the back of him and then he moved on and I got a message afterwards saying he was going to let me pass, so it was a bit confusing.’

Hamilton, meanwhile, set about beating Verstappen on the track – passing him and making it stick on lap 43 before going on to win the frantic and thrilling race.