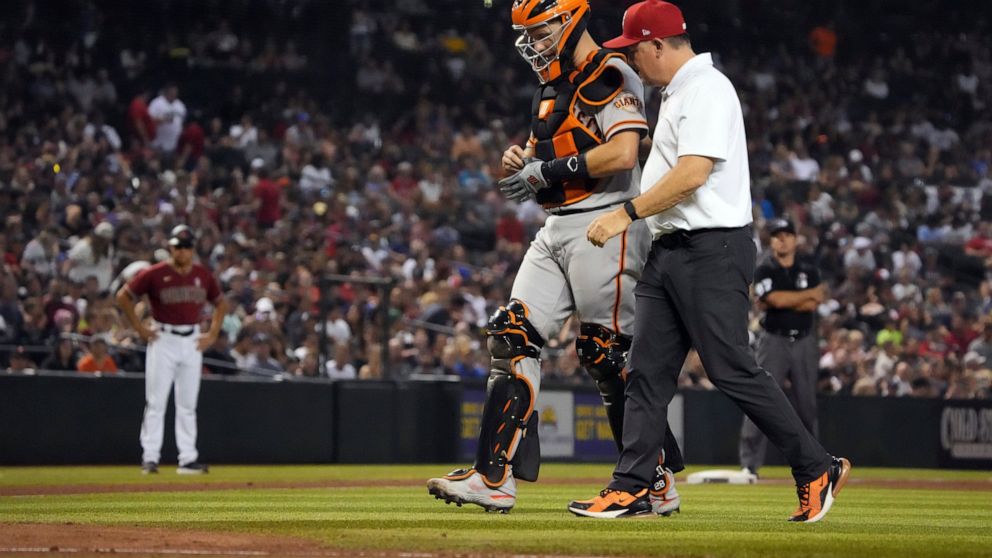 Giants catcher Buster Posey has been put on the 10-day injured list with a bruised left thumb, costing him his starting spot in next week’s All-Star Game

A look at what’s happening around the majors Saturday:

OUT AT THE PLATE

Giants catcher Buster Posey has been put on the 10-day injured list with a bruised left thumb, costing him his starting spot in next week’s All-Star Game.

Posey has been out since July 4, when he was hurt by a foul tip.

The 34-year-old Posey was chosen for his seventh All-Star team. After opting out of playing last year because of the coronavirus pandemic, the former NL MVP has been in top form this season, batting .328 with 12 home runs and a .968 OPS for the NL West leaders.

Former teammates Gerrit Cole and Zack Greinke will square off when the Yankees face the Astros. The pair overlapped in Houston in 2019, when Greinke was acquired at the trade deadline for a club that lost Game 7 of that fall’s World Series.

Cole (8-4, 2.91) has a 5.24 ERA for New York since it became clear in early June that Major League Baseball planned to crack down on pitchers’ use of illegal foreign substances. He had a 1.78 ERA prior to that.

Houston will be without All-Star shortstop Carlos Correa, who was placed on the injured list Friday due to COVID-19 health and safety protocols.

Dodgers ace Clayton Kershaw got an MRI on his sore left elbow that showed inflammation but no structural damage, according to Los Angeles manager Dave Roberts. Kershaw is scheduled to play catch and then use next week’s All-Star break to rest.

“It was soreness,” Roberts said Friday. “He’s never had soreness in his elbow, so we wanted to check all the boxes and make sure there’s nothing else to it. Fortunately, there wasn’t.”

Kershaw hasn’t pitched since July 4, when he allowed three runs in four innings against Washington. The three-time Cy Young Award winner is 9-7 with a 3.39 ERA in 18 starts this season.

The Mets are set to play their 10th doubleheader of the season with a twinbill against Pittsburgh. New York is slated for 13 doubleheaders this season, which would be its most since playing 19 in 1979.

With doubleheaders limited to a pair of seven-inning games this season as part of COVID-19 safety protocols, the Mets are set to save 26 innings over their 13 doubleheaders — hugely beneficial for Mets manager Luis Rojas and his injury-ravaged pitching staff.