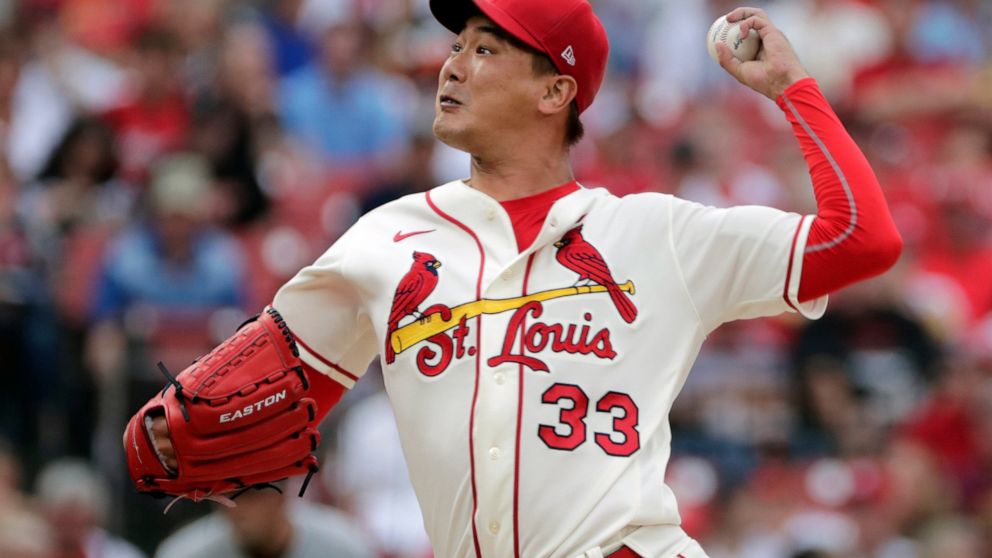 The South Korean-born Kim (5-5) has not allowed a run over his last 21 innings, covering three-plus starts. He was pitching in front of his wife and two children for the first time in the United States, which made the performance extra special

“I tried to be calm, not to get too excited,” Kim said through an interpreter.

St. Louis has won eight of its last 10 games at home against the Giants.

Kim allowed three hits in an 85-pitch outing. He struck out one, walked two and left with a 3-0 lead. Kim has allowed one run or less in six of his last seven starts. His wife, Lee Sang-Hee, and two children, Minjoo and Minjae, arrived in St. Louis earlier this week.

“I can’t imagine how good a feeling that has to be,” St. Louis manager Mike Shildt said. “It’s wonderful to have his family here, his kids here. It’s clearly good to see him pitch so well.”

Kim tossed seven shutout innings against the Giants on July 5. He was in total command again on Saturday.

“He’s been huge for us,” Goldschmidt said. “He gives us a good chance to win any time he’s on the mound.”

Kim planed on celebrating with some of his mother’s home cooking, which includes his favorite dish of Kimchi Chigae, a fermented chili pepper cabbage soup.

“My mother and I use the same oven,” Kim said. “But somehow she makes it better than I do.”

Kim said his recent success stems from his ability to keep the ball down.

“I just pitch low and my control is getting better,” Kim said. “Even though (it might be) a mistake pitch, the pitch is low and they get singles, not extra base hits.”

Kim’s family will return to South Korea late next week, but will not likely get to see him pitch in his next start. He said it was important for his children to see him perform in front of a large crowd.

Anthony DeSclafani (10-4) gave up thee runs on five hits over six innings. He struck out four and did not issue a walk.

Alex Reyes recorded his 21st save in as many opportunities this season. He has 23 successive saves, dating to last season.

O’Neill hit his 16th homer of the season leading off second inning. It was his first since a two-homer game on June 9 against Cleveland.

Goldschmidt, who had three hits and extended his hitting streak to a 12-games, hit a two-run blast in the fifth. Dylan Carlson led off the inning with a double.

“It was a fastball kind of middle away and down,” Goldschmidt said. “I was just trying to hit something hard there. Worst case get Dylan to third and I was able to get it out of there.’

The Giants, who scored an unearned run in the seventh, sport the best record in the majors at 58-33 despite the loss.

KING OF THE CUP

Tampa Bay winger Patrick Maroon, a native of St. Louis, was in attendance Saturday. He has captured three successive Stanley Cup titles, including one with the Blues in 2019. Maroon received a standing ovation from the crowd when he was shown on the scoreboard in the third inning.

The game drew a season-high 40,489 fans at Busch Stadium

Giants: INF Brandon Crawford was held out of the starting lineup Saturday after leaving Friday’s contest with a hamstring issue. He walked as a pinch-hitter in the ninth.

Cardinals: RHP Miles Mikolas will throw another batting practice session on Tuesday. He felt fine after throwing to several hitters on Friday. Mikolas is hoping to begin a rehab session later this month. He has been out since May 23 with right forearm tightness.