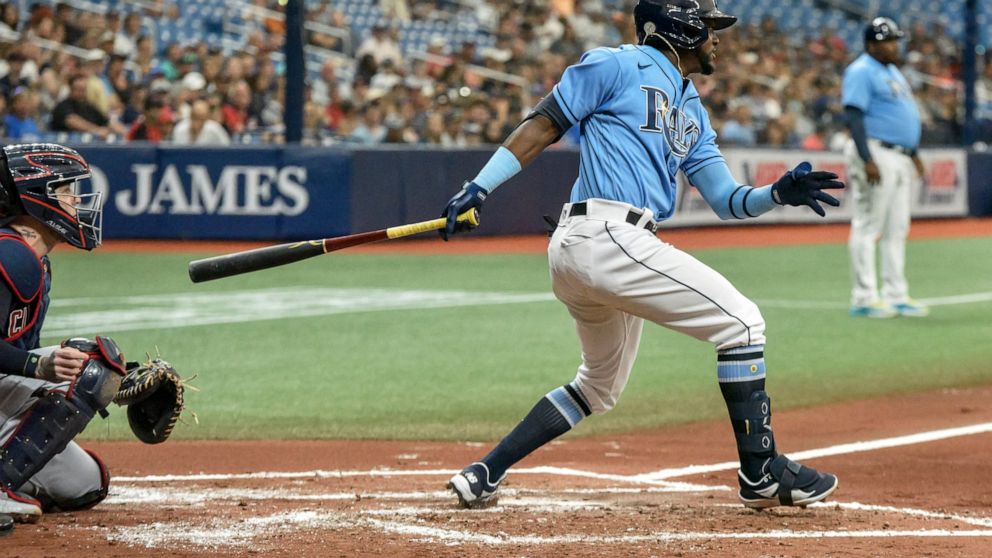 Kevin Kiermaier homered and drove in a career-high five runs, Vidal Bruján had an RBI single in his major league debut, and the Tampa Bay Rays beat the sliding Cleveland Indians 8-1 in a doubleheader opener

ST. PETERSBURG, Fla. — Kevin Kiermaier homered and drove in a career-high five runs, Vidal Bruján had an RBI single in his major league debut, and the Tampa Bay Rays beat the sliding Cleveland Indians 8-1 on Wednesday in a doubleheader opener.

Kiermaier had a two-run double in the first and connected on a three-run shot off J.C. Mejia (1-4) during the third.

“I’m starting to feel a lot more locked in and, hopefully, I can just find that consistency along the way,” said Kiermaier, who went 2 for 3 to raise his average to .239. “Just anything you can do to help the team win and create momentum for you and the boys out there, that’s what it is all about.”

Michael Wacha (2-2) allowed one run, four hits and struck out six in six innings. Ryan Sherriff worked the seventh to complete a four-hitter.

“We didn’t do much,” Indians manager Terry Francona said.

Franmil Reyes homered for the Indians, who have lost eight in a row. He homered and tied a career-high with five RBIs in Monday night’s 9-8 loss to the Rays.

The skid matched the longest during Francona’s managerial time with Cleveland. The Indians also dropped eight straight from Sept. 8-16, 2020, and from June 2-10, 2013.

Bruján had a remarkable first inning, which saw the 23-year-old take away a hit from Amed Rosario in the top half by diving to his left on a hard-hit grounder. Bruján followed that up later in the inning with an RBI single, then stole second and scored on Kiermaier’s double for a 3-0 lead.

Kiermaier’s second homer of the season gave Tampa Bay a 6-1 lead in the third and ended Mejia’s day.

Brandon Lowe, who hit his first career grand slam Monday, made it 7-1 on his 18th homer during the fourth. He has gone deep four times in his last six games.

Brett Phillips added a sixth-inning solo drive for the Rays.

Reyes pulled the Indians to 3-1 on a second-inning homer.

The doubleheader includes a makeup of a game postponed Tuesday night due to Hurricane Elsa.

Left-hander Sam Hentges (1-3) was to start the second game for Cleveland. Lefty Josh Fleming (6-4)) returned from a strained right calf to follow opener Collin McHugh (2-1) for the Rays.

Sherriff was optioned to Triple-A Durham.

Tampa Bay added Bruján from Durham as 27th player for the doubleheader. Ranked as the No. 11 prospect in the minors by Baseball America, he joined INFs Wander Franco and Taylor Walls as top minor leaguers called up by the Rays since late May. “It’s very cool,” Tampa Bay manager Kevin Cash said. “It’s hard work from the players, and a lot of hard work from our player development.” Bruján was expected to remain on the big league roster following the doubleheader.

Indians: OF Eddie Rosario went on the 10-day injured list with a right abdominal strain.

Rays: OF Manuel Margot (left hamstring strain) was placed on the 10-day IL and is expected to be out two to three weeks.

Indians: RHP Zach Plesac (4-3), out since May 26 with a broken right thumb, will return to start Thursday night’s game against Kansas City.

Rays: The starter for Friday night’s game against Toronto had not been announced.