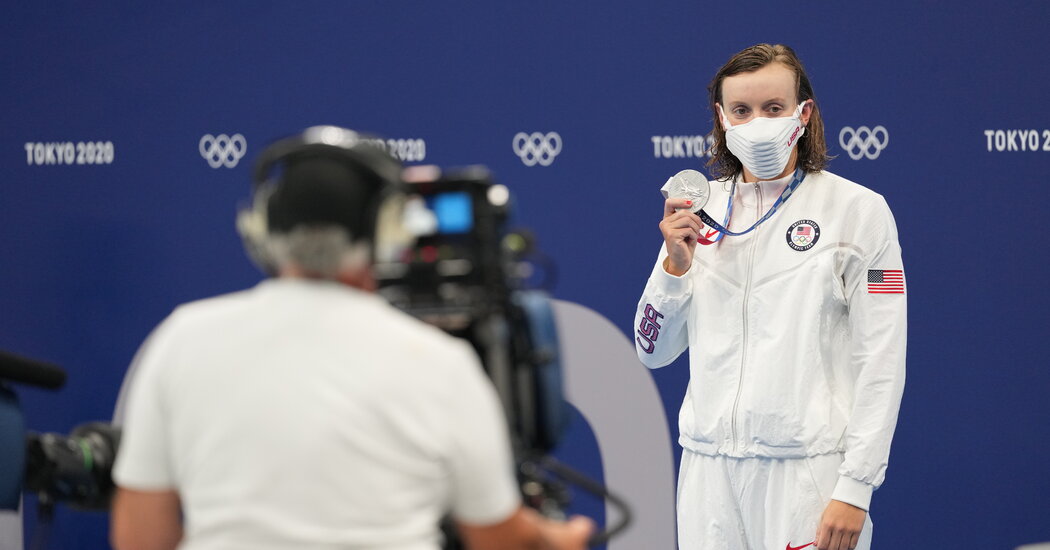 TOKYO — The moment Katie Ledecky knew would eventually come, though maybe not this soon, happened three-quarters of the way through the 400-meter freestyle Monday morning at the Tokyo Aquatics Centre.

For 300 meters Ledecky, the world-record holder and defending gold medalist, led Ariarne Titmus of Australia, who had been faster than Ledecky at this distance all year. Ledecky had gone out fast, trying to put Titmus in a hole and maybe make her doubt herself.

It’s what a swimmer does when she knows she might not have as much as the competitor next to her, and it nearly worked. Titmus said that halfway through the race she saw Ledecky a half-second and nearly a body in front of her and started to worry.

But then, 100 meters later off the turn, they were nearly even and, to nobody’s surprise, Titmus pulled ahead to win in a time of 3:56.69 to Ledecky’s 3:57.36. Yet it was still shocking to see Ledecky come up short at a distance that, not long ago, she had been anticipated to own through her career.

At the Rio de Janeiro Games in 2016, Ledecky won the 400 free by nearly five seconds. And yet, now, there was Titmus churning past her.

“Surreal,” Titmus said, still breathing heavily several minutes after the triumph. “It’s the biggest thing you can do in your sporting career.”

It was one of the most anticipated showdowns of the Tokyo Games. It seemed Titmus’s race to lose based on her superior times recently, but Ledecky had never lost an individual race at the Olympics, a run that stretched to her surprise win as a 15-year-old nine years ago in London.

That undefeated Olympic record, combined with Ledecky’s dominance in races longer than 200 meters, had made her swimming’s version of Serena Williams, an athlete nearly everyone in the sport stops to watch when she hits the water.

As the final laps unfolded, the Australian swimmer Kyle Chalmers was watching on a television at the swimming arena, taking a momentary break from warming up for the men’s 4×100-meter freestyle relay.

As Titmus pushed past Ledecky, Chalmers felt a boost of energy. “Really inspiring to watch,” Chalmers said. “It gives you goose bumps.”

In fairness to Ledecky, most champions lose, even in races they dominate. Michael Phelps has a silver medal in the 200 butterfly from the London Olympics, a race he was never supposed to lose (he won it again four years later).

Coming into the Tokyo Games, Titmus was the only swimmer who had beaten Ledecky in a distance race at a major meet. But that was at the 2019 world championships, when Ledecky was battling a virus. Still, Titmus had put a target on her rival’s back, saying at Australia’s Olympic trials that the U.S. champion and her American teammates wouldn’t have everything their way in Tokyo.

The words seemed prophetic on Monday. The American men delivered a statement in winning the 4×100-meter freestyle relay, even without Phelps to carry them. The Americans led wire to wire and put up the third-fastest relay time in history. Caeleb Dressel gave the U.S. the early lead, and Blake Pieroni kept it through the halfway mark. Then it was Bowen Becker’s turn. He turned over a half-body length lead to Zach Apple, who took the Americans home.

“My job is easy when I have these three guys leading me out,” Apple said with the gold medal draped around his neck.

But Ledecky vs. Titmus was the focus.

Ledecky has long been considered nearly untouchable at any distance more than 200 meters. But swimming is the ultimate sport of one-upsmanship. Records fall with surprising frequency, and Titmus has been chasing Ledecky’s for the past three years.

“I wouldn’t be here without her,” Titmus said of Ledecky when it was over. “She set an amazing standard.”

Ledecky found herself doing something she rarely has done — explain how she had come up short, despite swimming her best time in the race since the 2016 Olympics, when she set the world record.

“You’re just trying to find every little part to try to inch ahead,” she said. “She flipped a little bit ahead coming into the last 50. I could see her and I knew that she wasn’t fading. I felt like I was still right there.”

Peaty said he was certain Ledecky would keep replaying the race in her head, wondering if there was something else she could have done.

There was little time for that, however. Ledecky is also competing in freestyle races at 200, 800 and 1,500 meters at these Games, and she had preliminary heats in the 1,500 and the 200 scheduled for Monday evening.

After some down time, she planned to return to the pool in the late afternoon for the second half of a day at the office like few others.