Amidst it all, Kanye West has been shopping.

To recap, the last month in Kanye West has been a doozy: in the lead-up the ever-shifting release date of his upcoming tenth studio album, Donda, Ye took a weeks-long artist’s sojourn inside the basement of the Mercedes-Benz Stadium in Atlanta. He also hosted two big-spectacle listening events, the latter of which was art-directed by Balenciaga creative director Demna Gvasalia. A third event is slated to take place tonight at Soldier Field, in West’s native Chicago. In advance of the performance, Kanye stopped by the Dover Street Market store in Los Angeles earlier this week and bought out the entire stock of Balenciaga inventory (every last item!), a Dover Street representative confirmed via email.

The Dover Street Balenciaga spree wasn’t Kanye’s first pre-album, buy-everything shopping blowout. While recording his 2018 record Ye in Wyoming, Kanye purchased 13 kitchen-trash-bags-full of secondhand outdoors-wear at a vintage shop in Victor, Idaho. But Balenciaga has been a constant in the Donda era.

While West and Gvasalia go way back to the designer’s founding days at Vetements, Ye has made Balenciaga—which Gvsalia’s led since 2015—a fixture in both his outfits and his creative process as of late. During the second, Demna-directed Donda event in Atlanta, Ye alternated wearing a floor-length down-comforter-style puffer jacket and a rubber-spike-covered jacket from Gvasalia’s apocalyptic fall 2020 collection (shown, semi-apocalyptically, in March 2020 at Paris Fashion Week). The duo also collaborated on a commemorative T-shirt following DMX’s death in April that raised a million dollars for the late rapper’s family, and West attended Balenciaga’s debut couture presentation in Paris in July.

Not that the drawn-out Donda drop process has been pure Balenciaga. We’ve seen plenty of the Yeezy GAP puffer on Kanye. But Ye’s been conspicuously heavy on the capital-F Fashion of late. In July, he posted an outfit flat-lay pic on Instagram (since deleted) with a slew of pieces from French luxury conglomerate Kering brands—Balenciaga, plus Bottega Veneta and Saint Laurent. It also seems like Kanye’s been really hitting up Dover Street lately; he was spotted at the ultra-cool retailer in L.A. on August 16, browsing the Raf Simons rack while wearing his favorite new accessory: a balaclava-style full-face covering.

Where Kanye’s fondness for utilitarian apparel is well-documented, and has shaped nearly all of his Yeezy collections thus far, the clothing he’s fixated on this time around is either hyper-functional (i.e., the “Donda” tactical vest) or hyper-fantastical: the enormous comforter puffer, the spike-covered jacket. Both offer up a form of protection and security; they’re both hard and soft, literal and conceptual. As Kanye ascended into the heavens from the Mercedes-Benz Stadium, one could imagine the clothes themselves dematerializing and falling to the ground, as if to say, “Where we’re going, we don’t need function.” 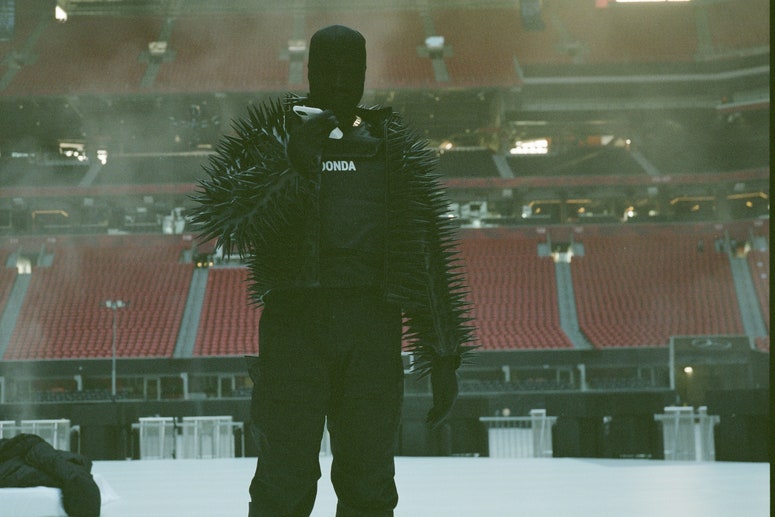 The album still isn’t out, but we’re watching Kanye edit in real time. 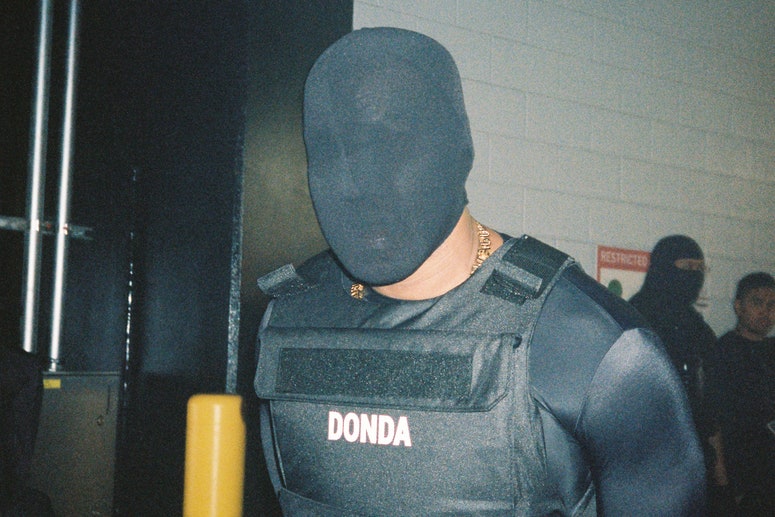