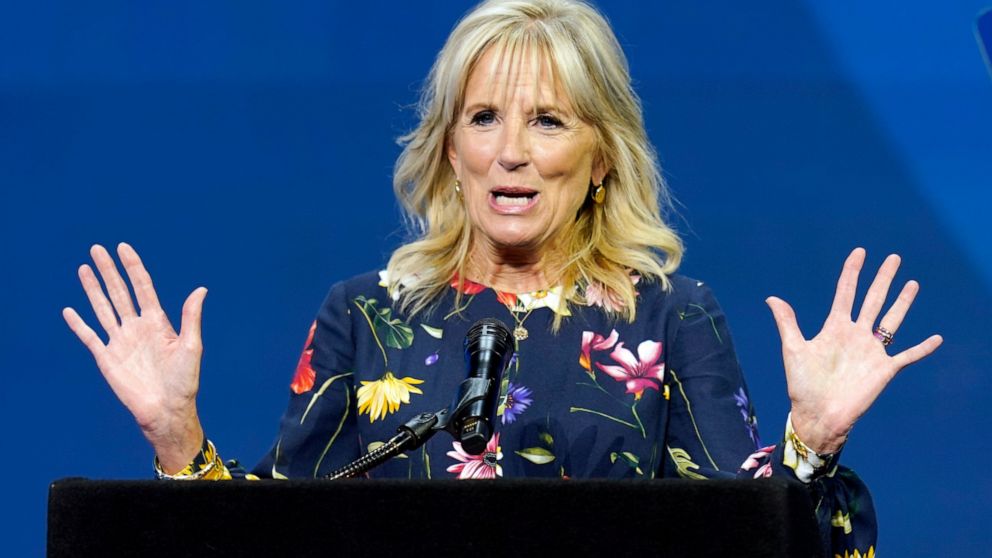 WASHINGTON — Jill Biden embarks Wednesday on her first solo international trip as first lady, leading an American delegation to the Olympic Games in Tokyo, where the coronavirus is surging and COVID-19 infections have climbed to a six-month high.

She will stop in Alaska on the way to Japan, and in Hawaii before she returns to Washington.

White House press secretary Jen Psaki said Tuesday that President Joe Biden and the first lady both felt it was important that the delegation be led “at the highest level,” and that Jill Biden looked forward to the long journey to help support U.S. athletes, who will be competing in some of the starkest conditions for an Olympic Games.

She has a robust agenda for roughly 48 hours on the ground in Japan’s capital.

The first lady is set to arrive at Yokota Air Force Base in Tokyo on Thursday afternoon and have dinner with Prime Minister Yoshihide Suga and his wife, Mariko Suga, at Akasaka Palace.

She is to return to the palace Friday and be hosted by Mariko Suga. Biden will hold a virtual get-together with members of Team USA before meeting Emperor Naruhito at the Imperial Palace. She attends the opening ceremony for the games in the evening.

On Saturday, the first lady will dedicate a room in the residence of the U.S. chief of mission to former U.S. Sen. Daniel Inouye, D-Hawaii, and his wife, Irene Hirano Inouye. The senator died in 2012, and his wife died last year.

Jill Biden will also host a U.S. vs. Mexico softball watch party at the U.S. Embassy for staff and their families, and cheer U.S. athletes competing in several events before leaving Tokyo.

The trip opens Wednesday at Joint Base Elmendorf-Richardson in Anchorage. The first lady will visit Alaska Fisher House, where military and veteran families stay at no cost while a loved one is in the hospital. She will also visit the Alaska Native Medical Center in Anchorage to encourage people to get their COVID-19 vaccinations.

The first lady will tour a Honolulu vaccination clinic before she returns to Washington.

The Olympic host city is now under its fourth state of emergency, which runs through Aug. 22, spanning the duration of the Olympic Games that open Friday and end Aug. 8. Fans are banned from all venues in the Tokyo area, with limited audiences at a few outlying sites.

Suga’s government has been criticized for what some say is prioritizing Olympic sport over public health, and there has been little fanfare in the run-up to the Games, which were postponed from last year because of the coronavirus pandemic.

The Imperial Palace said last month that Naruhito is “extremely worried” that the games could accelerate the spread of the coronavirus.

Jill Biden is fully vaccinated. Psaki, the White House press secretary, said the U.S. delegation will follow “very strict” health and safety protocols during the trip, including limiting their engagement with the public and keeping as small a footprint as possible.

President Joe Biden is not attending the Games.