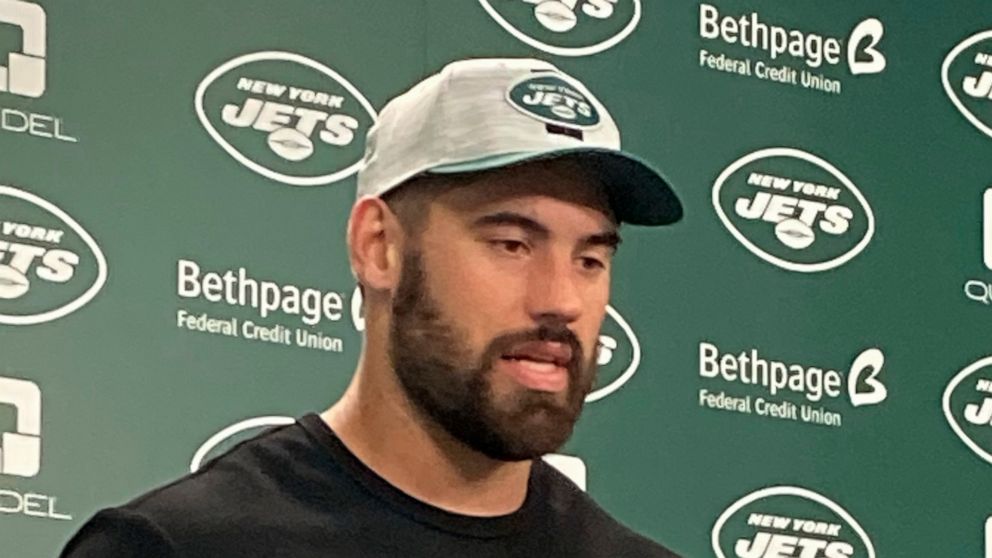 The big New York Jets offensive lineman with a doctorate in medicine was on the front lines helping fight against a pandemic that gripped the world — and putting his playing career on hold.

“I was part of a movement of thousands of people that went back and helped, whether it was retired nurses or doctors, ” Duvernay-Tardif said. “I think it gave me a different perspective on the medical system. Like, everything is so hierarchical normally, but in a time of crisis, feeling like everybody coming together and working as a team, it was pretty amazing.”

Duvernay-Tardif was coming off having won a Super Bowl with the Kansas City Chiefs in his sixth NFL season when the world’s events tugged at him. For years, his life had been all about blocking defenders, protecting quarterbacks and plowing lanes for running backs.

But he wanted to do more.

He needed to do more.

Duvernay-Tardif didn’t yet have his license to practice, so he instead worked as an orderly at a long-term care facility in his hometown. He helped feed patients, changed them, gave them medicine and offered a friendly face to some living their final days.

“A big impact, that’s for sure,” he said of how the experience affected him. “I think it changed my perspective, both as a future physician, but also as a football player. … I know I’m going to be involved in the medical community for the next 40 years, but I think last year there was some special circumstances.

“And I felt like the best thing for me was to go on the front line and help in any capacity possible.”

Through the long, emotional days and nights, football remained in the back of Duvernay-Tardif’s mind. He knew he’d return to the field — only after he finished his duties during the pandemic.

“I kind of promised myself when I worked it out that I was going to go back,” he said. “For me, it was not about the money, the legacy or whatever. It was really about playing. And it’s kind of a personal challenge that I set for myself.”

The gyms in Montreal were closed for several months, so he kept himself in shape by building a makeshift workout station on his balcony during the winter — while the Chiefs made another Super Bowl run without him.

In March, he stopped working at the long-term care facility and set his sights on an NFL return.

He returned to the Chiefs in the spring and was greeted warmly by his teammates — and the fact Kansas City drafted Trey Smith in the sixth round. Duvernay-Tardif broke a bone in his hand in training camp and was sidelined several weeks, and Smith moved into the starting job at right guard.

Duvernay-Tardif was inactive for the Chiefs’ first seven games, and then was active but didn’t play in Week 8. Looking for an opportunity elsewhere, he waived his no-trade clause and was dealt to the Jets for tight end Daniel Brown on Nov. 2.

He made his debut for New York 12 days later, playing three snaps on special teams against Buffalo. And last Sunday against Miami, Duvernay-Tardif started at right guard in place of Greg Van Roten.

“I was really happy to get back out there,” Duvernay-Tardif said. “That’s why I came to New York, was to play and to step on that field. It’s amazing. It’s a blessing.”

For a guy who hadn’t played since the Super Bowl in February 2020, it didn’t take long to knock off the rust.

“Thought he did a good job,” coach Robert Saleh said. “Obviously, there’s always going to be plays that he’s going to want back. But two years without playing football, at least in a game, so excited for him to get another opp and another crack. Expecting him to be better this week.”

Duvernay-Tardif has been getting a crash course in the Jets’ schemes and terminology while quickly endearing himself to his new teammates.

“The dude is a doctor, man, like that’s crazy, bro,” right tackle Morgan Moses said with a laugh. “I asked him, like, ‘Hey, can you give me a IV?’ Just joking. It’s like, where were you in training camp when we were all dying out here?

“No, but it’s great to have him in here, man. I think he’s a great guy. Obviously, you know what he’s done off the field has been amazing.”

Jokes aside, Duvernay-Tardif acknowledged some teammates have asked him about his thoughts on the COVID-19 vaccine — a hot topic issue in the NFL, and in society. It came to the forefront this week when Jets quarterbacks Mike White and Joe Flacco, who is unvaccinated, were placed on the COVID-19 list.

“I feel like as a medical professional, we have that responsibility to try to give the best information possible,” Duvernay-Tardif said. “It’s a personal decision, but of course, if you ask me, everybody should get vaccinated, so I try to state the facts and stay objective.”

He has already made a memorable mark on the football field — and is only beginning to do so off it.

“Football is an amazing adventure, but it’s also, for me, a way to build a platform to promote a greater message, something that you believe in,” Duvernay-Tardif said. “And for me, it’s public health. It’s trying to do primary prevention with kids and so on.

“So, I hope what I did is also going to follow me and be part of my legacy because I want to use it to try to have a greater impact.”