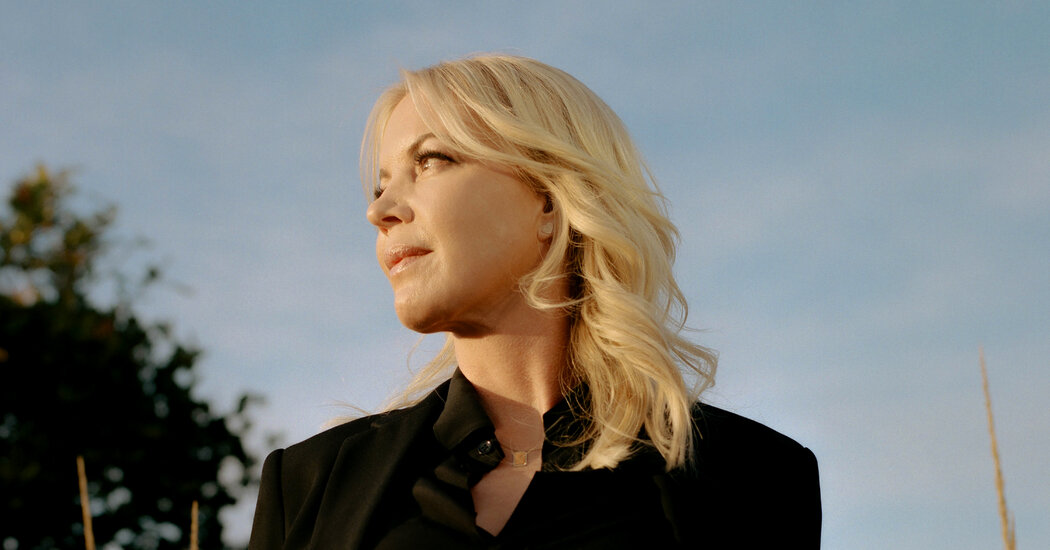 By the time she got to the microphone, the applause had subsided, and Jeanie Buss was faced with the scariest sound for a stand-up comedian.

She had prepared for this moment for months. Months and a week, actually: She missed her first stand-up showcase at North Hollywood’s HaHa Cafe in September 2018 because her day job got in the way. When you’re the owner of the Los Angeles Lakers, and LeBron James is making his preseason debut, a comedy coming-out party can wait.

Buss had sought out comedy as a means of healing, not realizing how frightening it would be. Her act was raw, vulnerable. At times, it was funny.

“Someone called me Barbie,” Buss, who has blond hair, said to open her set. “In L.A., actually I’m Barbie’s mom.”

It was catharsis in the form of comedy, coming just when she needed it most.

Or so she thought.

‘She has to have this tough exterior.’

Told by a waiter at Jinky’s Cafe in Studio City, Calif., that the restaurant serves Tater Tots, she claps and beams as if she is watching Lakers forward Anthony Davis dunk.

It’ll be a while before she sees that again, with the Lakers long gone from the playoffs after a surprising first-round defeat by the Phoenix Suns. But her mood is up these days. It has been weeks since the abrupt ending to the Lakers’ quest for back-to-back championships, and a part of her saw it coming after the fast turnaround from the end of last season to the start of this one.

“It just felt like we never got to catch our breath,” she said.

Besides, she added, she sees in the Suns embers of the Lakers’ championship spark.

“A lot of people are surprised at Phoenix, but I’m not,” she said. “The way they played in the bubble, you could tell it was like money in the bank. They picked up right from it and you could tell, they were so well prepared. They know each other well.”

The disappointment has subsided such that Buss can joke about it. But in the middle of 2018, after a series of personal and professional blows, she wasn’t finding much to laugh about.

Her father, Jerry Buss, had died in February 2013 at age 80, after being hospitalized with cancer for more than a year. The Lakers franchise, which he purchased in 1979 and steered to 10 championships, had become a laughingstock, mired in the worst stretch in its history. Kobe Bryant, the team’s latest icon, had retired in April 2016. Eight months later, Jeanie Buss and Phil Jackson, the former Lakers coach, ended their longtime engagement. And in the beginning of 2017, a Shakespearean struggle for control of the Lakers became public, with Buss hiring the Hall of Famer Magic Johnson as president of basketball operations and replacing Mitch Kupchak, the longtime general manager, with Bryant’s agent, Rob Pelinka. She also accepted the resignation of her brother Jim as vice president for basketball operations. An ensuing lawsuit split the family.

It was enough to make Buss search for answers.

She found them on the stage.

She had always had a love affair with stand-up comedy but never thought she could pursue it, until she was coaxed by the standup comedians Theo Von and Heather McDonald at a July 4 barbecue four years ago. McDonald suggested Buss retake a course taught by the longtime comedian Lisa Sundstedt. Titled “Pretty, Funny Women,” the class is designed for women who are first-time comedians, no matter their age, race or economic status. Buss first started the course in 2013 after her father’s death, but she gave up three weeks in. This time she stuck around, struck by the “cross-section of people whom I’d never meet in my ordinary life.”

Sundstedt saw real improvement in Buss on her second go.

“She’s so shy that she probably didn’t even realize she’s a funny person,” Sundstedt said. “That might not be encouraged in her world, where she has to have this tough exterior.”

When Buss began attending the N.B.A.’s Board of Governors meetings for the Lakers in 1995, she was intimidated by some of the glares directed her way.

These days, she trades barbs with the best of them.

“Jeanie has always had that special spark,” said Wyc Grousbeck, who led a group that bought the Celtics in 2002. “People want her to do well. They’re happy when she succeeds. They know she’s earned it — and I mean the ‘earned it’ part. She’s respected unequivocally among the league, by the owners, by the players. She’s got steel in her veins.”

It was clear something had been eating at Buss as she sat for breakfast in early May for one of several interviews with The New York Times.

It wasn’t the injuries to James and Davis, which had triggered a Lakers tumble to seventh place in the Western Conference from second in mid-March.

The previous 18 months had been heavy for Buss. In December 2019, her mother, JoAnn, died at 86. Less than two weeks later, on New Year’s Day, David Stern — the former N.B.A. commissioner and one of her mentors — died after several weeks in a coma. Then, in late January, Bryant and his 13-year-old daughter, Gianna, were killed in a helicopter crash.

Now the Basketball Hall of Fame ceremony was days away, and Bryant was going to be inducted. Buss was dreading it.

She met Bryant in 1996 after his introductory news conference with the team. She was 34; he was 17. The Lakers’ offices were inexplicably empty that day, with no one assigned to take the rookie out to lunch. Buss was thrust into the gig, and they talked about Italy — Bryant was raised there, and Buss had spent time in the country with her ex-husband, a former professional volleyball player. She remembered being stunned when Bryant asked a waiter if he spoke Spanish, then declared that he was going to learn it.

By his final season, 2015-16, Bryant trusted only Buss to help pull off his goodbye tour. Once, he asked her out to lunch and brought Gianna. He said he wanted his daughter to learn from a powerful female sports executive; Buss now believes that was only a ruse, that Bryant just wanted Buss to know how important she was, to him and to the team.

When she tells that story, Buss gets choked up. Her shoulders collapse when she is asked about the Hall of Fame ceremony.

“It’s almost like having to put him away again,” she said, her voice cracking. “He’s going into the Hall, and it’s like we’re leaving him there. It’s hard. It’s hard to go through this again.”

But now she has a workplace comedy television series in the works, conceived of and pitched by her, the comedian Mindy Kaling, the television writer Elaine Ko and Linda Rambis, Buss’s longtime Lakers colleague and best friend.

The show is set in the back offices of an N.B.A. team. In June, Netflix announced that it had greenlit a 10-episode series. While Buss said the show was not based on her life, she and Rambis gave Kaling and Ko almost four decades’ worth of backstage N.B.A. drama and humor.

“It makes it entertaining and cathartic for me,” Buss said. “Now, 20 years later, I can look back at stuff and laugh at it and have it in context. What was a heavy burden alone can now be shared and aired out. And it didn’t destroy me! These things happen and you feel like you’re alone, but people can relate.”

Eight months after Bryant retired, Buss and Jackson broke off their four-year engagement. The two had met before briefly, but they began dating after he became the Lakers coach in 1999.

“He’s this person I never thought I’d be attracted to, but the second I met him, there was something about his voice,” Buss said. “I was just like, ‘Who is this guy?’ All I knew was he was this kind of eccentric coach of the Bulls, and then he becomes the most important relationship in my life.”

Jackson had retired from coaching in 2011 but was ready to come back to the Lakers in November 2012 after Jim Buss and Kupchak, the general manager, reached out to him as the team struggled under Mike Brown. Jackson wore a Lakers shirt when he cooked dinner for Jeanie one night, his sly signal to her that he was in. But Kupchak called around midnight, saying they had instead decided to hire Mike D’Antoni. Jeanie Buss was devastated.

Part of the fallout was a rekindling of Jackson’s interest in basketball, leading him to take the job of team president for the Knicks, which took him across the country from Buss. It was the start of the unraveling of their relationship.

“Comedians come from pain, and right away you’re saying, what kind of pain can she have?” said Craig Shoemaker, a comedian who is her close friend. “Money, looks, fame, she owns one of the storied franchises in history — in seconds you can break that barrier by telling your truth. It always comes out if you’re a phony. And she’s not.”

Years removed from her foray into stand-up comedy, Buss is back to finding joy in basketball, even if this season ended on a sour note.

The Lakers are no longer a joke. Helping lead the franchise to its 17th N.B.A. championship last season was her greatest accomplishment, she said, even if the celebration was dampened by the multiple losses she’d had over the years: her father, her mother, Stern, Bryant.

“That’s a lot of loss,” she said. “And it all flooded back in that moment.”

There was laughter mixed with tears then, but now reflecting on the championship, Buss knows what it will mean for her legacy.

“I think now people are saying, ‘She belongs,’” Buss said. “Would I have been in this position if my dad didn’t own the team? Probably not. But I do deserve to be here.”

Her role is certainly different now nearing 60, and she embraces it. Her father purchased the team when she was 17. With Johnson and those early-80s Lakers, she was a kid sister. Then, with Bryant, she became “a big sister, for sure.”

Once again, her role has changed.

“Now I’m mom,” she said of her current relationship with players. “I’m proud to say that.”

She pauses for effect, like a trained stand-up. Doc Rivers meets Joan Rivers.

“When I get to be grandma, I’m not so sure. I might just stick with mom.”