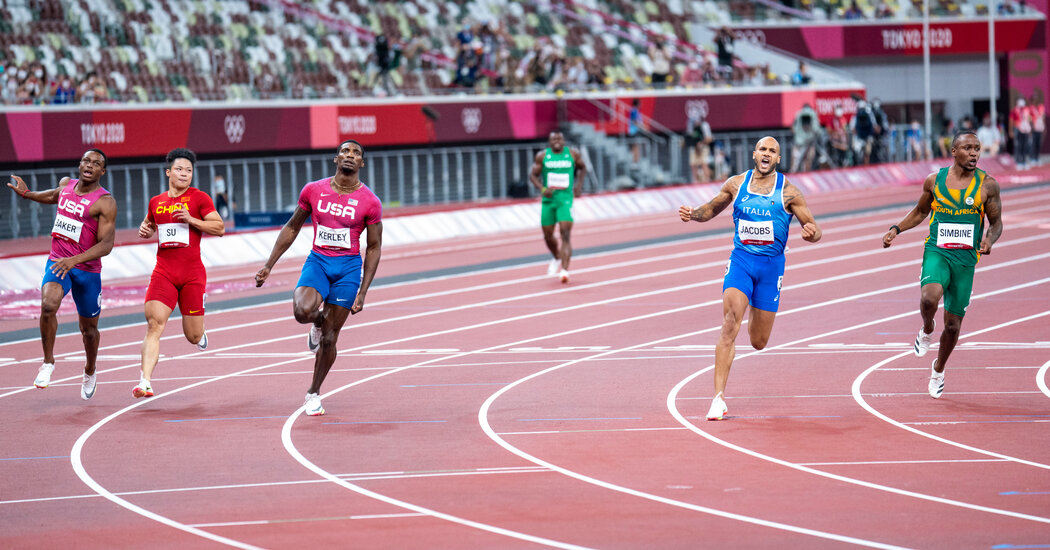 “I really didn’t know nothing about him,” Fred Kerley of the United States said.

“I thought my main competition was going to be the Americans,” Andre De Grasse of Canada said.

The man in Lane 3 was an El Paso-born Italian named Lamont Marcell Jacobs, and he won Olympic gold on Sunday in the men’s 100-meter dash. His result came as a shock to Kerley, who finished second, and to De Grasse, who finished third, and to Jacobs himself, who thought he had already fulfilled his Olympic dream by merely making the eight-man final for the race.

Once he had made it there, Jacobs, 26, decided to go for more. More, in this case, meant becoming the first person other than Usain Bolt to win the event in the Olympics since 2004 and erasing his anonymity in exactly 9.80 seconds, a personal best and a European record. It sent the few dozen Italian partisans who were scattered across a largely empty stadium into a state of near delirium.

Asked whether he thought he would win, Jacobs said: “No. No. No. I think I need four or five years to understand and realize what is happening.”

After he crossed the finish line, a diamond necklace sparkling around his neck, Jacobs digested what he had done by screaming and leaping into the arms of Gianmarco Tamberi, an Italian high jumper who was minutes removed from winning his own gold medal. Jacobs said they had discussed their modest Olympic aspirations while playing video games the night before their competitions.

It was the third night of track and field at the Tokyo Games, and it delivered thrilling performances.

Yulimar Rojas of Venezuela broke a world record set in 1995 to win the women’s triple jump. In the men’s high jump, Tamberi and Mutaz Essa Barshim of Qatar matched each other all evening until both failed to clear 7 feet 10 inches on three straight tries. They were facing the equivalent of sudden-death overtime when one of the officials, citing an obscure rule, asked them if they wanted to settle for a tie instead.

“Can we have two golds?” Barshim asked him.

Assured that they could, Tamberi and Barshim embraced, their bromance on display.

“He’s one of my best friends,” Barshim said. “We’re always together.”

Barshim was so excited, he broke his sunglasses.

After missing the 2016 Olympics because of a leg injury, Tamberi kept his cast and wrote “Road to Tokyo 2020” on it. When the Games were postponed last year, he scratched out “2020” and wrote “2021.” On Sunday, he took the cast with him to the stadium as a reminder of his hard work.

Tamberi secured his gold medal about five minutes before the start of the men’s 100-meter dash, and Jacobs said he felt inspired. Only then, he said, did the goal of winning his race seem plausible.

“Olympic champions,” Jacobs said, “for us and for Italy.”

Still, his triumph was improbable, and it offered a stark counterpoint to what happened at the stadium the night before, when Jamaicans swept the medal podium in the women’s 100 meters. No one was stunned to see them sprint to the top three spots.

And then there was Jacobs, the first Italian to even make a final of the men’s 100-meter dash.

Born in Texas to an Italian mother and an American father, Jacobs moved with his mother to Italy after his parents separated when he was 6 months old, he said. He never knew his father, also named Lamont, until about a year ago, when they spoke on the telephone for the first time. Jacobs said his father lives in Dallas.

“I started to have a new relationship with him,” he said. “For me, it was really important.”

His father was texting him in the days before Sunday’s race, assuring him he could win.

The event had long been dominated by Bolt, who retired after the 2017 world championships after doubling as the 100- and 200-meter champion at three consecutive Olympics, from 2008 to 2016.

A charismatic presence who transcended the sport, Bolt left an enormous void. There was no clear-cut favorite in Sunday’s final. The field was also missing two notable Americans: Trayvon Bromell, who came to Tokyo with the fastest time in the world this year but failed to advance out of the semifinals, and the reigning world champion, Christian Coleman, who is serving a suspension for missing a series of drug tests.

In a field full of underdogs, Jacobs was almost an afterthought. Until 2018, he specialized in the long jump. (His Instagram handle is still @crazylongjumper.) He had never run faster than 10.03 seconds in the 100 meters until this year, and he was unfamiliar to more than a few of the other finalists in Tokyo.

“This was my first time racing against him,” De Grasse said after winning his second straight Olympic bronze medal in the event.

Jacobs credited his meteoric rise to good nutrition and training, an improved start and an increased emphasis on his mental approach. He said he would often crack in important races.

They never felt better than they did on Sunday, when he raced to an Olympic title, unknown no more.