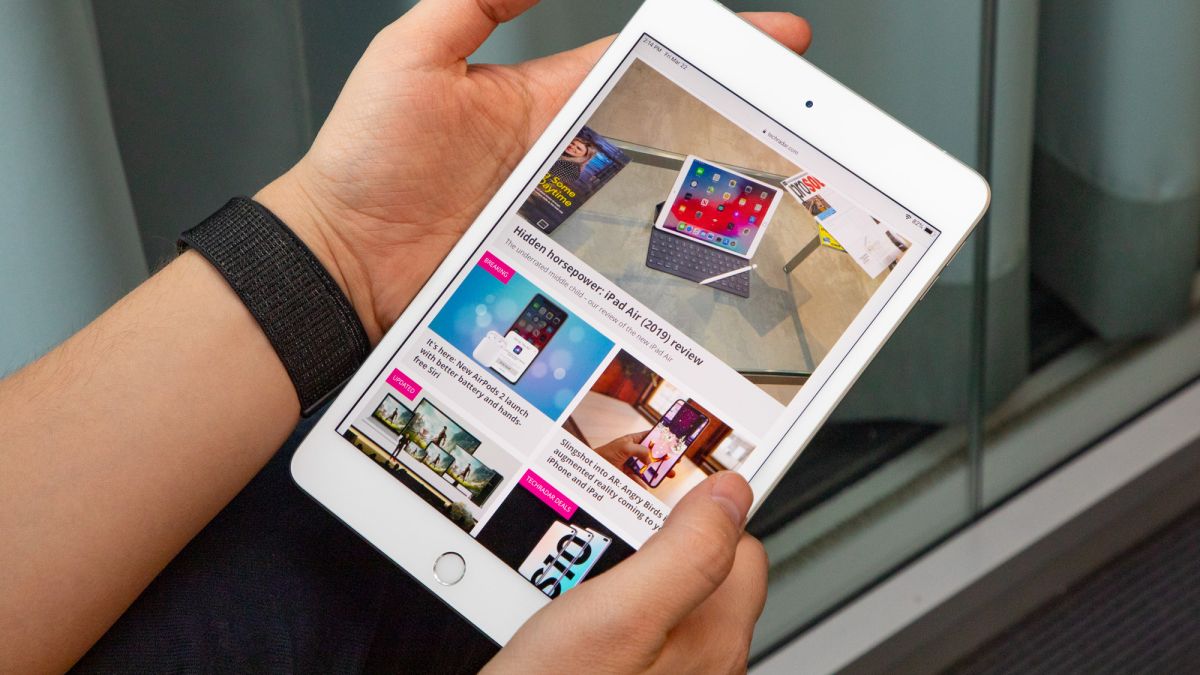 While the iPad mini 6 has been rumored for quite some time, we’re still eagerly awaiting its release. Leaks and rumors are getting us excited for the thing – maybe too much so.

So when could we see the sixth-generation small-form iPad? We’ve no idea, but it probably won’t be for a while: if the thing was ready to go, Apple would have announced it at the event. Perhaps it’ll come out alongside the iPhone 13, in September, joining the new entry-level iPad in its usual slot.

iPad mini devices are the smallest of all Apple’s tablets, with screen sizes below even the entry-level iPads. They’re designed for people who don’t need a huge 12.9-inch screen like in the iPad Pros but still want lots of processing power and other tricks, along with the signature polished Apple interface in iPadOS.

Apple’s tablet line can be confusing, and it’s not quite clear if the iPad mini is designed to sit below, above or alongside the entry-level slates in the company’s line-up. Though given the small size of the iPad mini, you probably won’t consider it if you’ve already got a phone that’s nearly as large, like the iPhone 12 Pro Max.

The last entry in the line was the iPad mini (2019), so a newer version of the tablet is overdue.

Despite the fact that it’s probably about to launch, we don’t know too much about the upcoming iPad mini 6, beyond a few leaks and rumors, but we’ve listed what we know, or can guess at, below. Then below that we’ve come up with a wish list of what we want to see in the new iPad mini in 2021.

The latest rumor suggests that the iPad mini 6 won’t, in fact, get a Mini LED display upgrade – contradicting an earlier leak that the small tablet would get the same screen tech as the 12.9-inch iPad Pro.

Apple hosted an event on April 20, and while all signs pointed to the iPad mini 6 getting shown off there (as well as an iPad mini Pro), that turned out to be incorrect.

That said, the slate looks likely to still land this year, with a respected analyst of Apple devices claiming that it will land in the second half of 2021 – possibly in ‘the fall’ (September 22 to December 21). A second report backed up this claim, as has a third, so this seems very likely.

We’ve also seen model numbers for unannounced iPads listed by the Eurasian Economic Commission (EEC). While the iPad mini 6 isn’t mentioned by name, it’s possible that it’s among them, and these sorts of listings usually appear quite close to launch, so maybe we won’t be waiting long.

Regarding price tag, not much has been leaked so far, though one report states the iPad mini 6 won’t be as affordable as the 2020 entry-level iPad, thanks to its specs.

On the other hand, another source claims that the mini 6 will be “consistent” with its predecessor in terms of price.

There are several reports so far which give us information on the iPad mini 6 – we’ve mentioned them above, but we’ll unpack everything they tell us about the tablet here.

At least one leak points to the iPad mini 6 having a Lightning Port, unlike some of Apple’s other tablets – like the newest iPad Pro, which switched to USB-C – as well as an A13 Bionic chipset (also seen in the iPhone 11) and an 8.5-inch screen.

For context, the 2019 iPad mini has a 7.9-inch screen, so that would be a fairly substantial size increase.

The second leak backs up this size assertion, but doesn’t give us any more information beyond that and a vague release date.

There’s contradictory information about whether or not the device will get a Mini LED display upgrade, like the 12.9-inch iPad Pro has been given. The latest report suggests that the iPad mini 6 won’t get a Mini LED upgrade this time around.

We’ve also seen leaked dummy units of the iPad mini 6 which show very few design changes from the 2019 model, though perhaps the bezels are smaller – you can see the images above, where the new mini-iPad is shown alongside dummy models of the two iPad Pro (2021) devices.

On the other hand, more recent renders suggest that the iPad mini 6 will follow the lead of the iPad Pro and iPad Air models, with no home button (the Touch ID sensor will apparently be built into the power button). According to this particular leak, the iPad mini 6 will swap Lightning for USB-C for its data and charging port.

The USB-C port rumor has been backed up a lot, like with this report which also says the slate will come with a smart connector and A15 Bionic chipset. The connector would be for clip-on keyboards, while the chipset is one we haven’t seen on a product, though will likely come in the iPhone 13.

Interestingly we’ve also now heard talk of an iPad mini Pro. This would apparently have an 8.7-inch screen, and be wider but shorter than the iPad mini (2019). The source claims it will launch in the second half of 2021, but we’re not convinced it exists, and if it does, it’s probably a different slate to the iPad mini 6.

A separate leaker suggests the iPad mini Pro, or iPad Pro mini (they refer to it as both), could come in the second half of 2021. Apparently, it’ll have an iPad Pro-like design, with slim bezels, and will also be compatible with 5G networks.

The idea of an iPad mini with thin bezels and no home button has been backed up by a separate report, making the aforementioned dummy units seem incorrect.

A reputable leaker of Apple details has also since said the same, adding that the iPad mini 6 will apparently have the latest chipset (presumably meaning the A14 Bionic from the iPhone 12 range, rather than the M1 from the iPad Pro 2021).

iPad mini 6: what we want to see

Here are all the key features and specs we want to see in the iPad mini 6, inspired by our experiences with its predecessor as well as changes in the tablet market, the slate’s competitors, and Apple’s other iPads.

Apple’s iPad lineup is confusing given the entry-level iPads and iPad minis largely hit the same price point, with the minis often just a touch pricier.

However the iPad mini can be a strange device in that it’s smaller than all its Apple tablet brethren, but also more powerful and pricey, so it’s not clearly better or worse, which can lead people to being confused as to which they should buy.

If the iPad mini 6 were to be smaller than the other tablets but just as powerful, and more affordable, the distinction between the slates would be clearer, and it would be way easier for people to work out which is best for them.

This way, the iPad mini 6 would be a great purchase for people looking for a handy little iPad companion without it being too pricey.

So far all iPad mini models have had 3.5mm headphone jacks, but that’s far from an assured thing given Apple’s habit of cutting the port from its devices.

We’d like to see the iPad mini 6 retain the headphone jack though, as they’re really useful for people who like their wired headphones as well as many who like to plug their tablets into physical speakers when home or about.

As well as audio output, 3.5mm jacks can also be used for audio input, and people who use their iPads to record music or voice notes might like the option of using such a wired device without taking up the main connector slot too.

The existing iPad minis, and indeed iPad Airs and entry-level iPads, are pretty dated in one key way – they all have pretty big bezels around them, especially at the sides, and given even the most affordable Android phones have dramatically reduced bezels nowadays, this just won’t do.

Big bezels make the size of the tablet bigger without resulting in extra screen size, and for a real ‘mini’ iPad mini we wouldn’t want the slate to be much bigger than its screen size – especially if that size is due to be increased.

We’d understand if Apple wanted to retain Touch ID and a physical button,as it has tended to do on its affordable products including the basic iPads and iPhone SE (2020), but beyond this large bezels are unnecessary.

The iPad mini 5 is compatible with the first Apple Pencil, but that’s quite a divisive stylus given its limited range of functions and the irritating way of charging it (you have to physically plug it in to the tablet such that it sticks out like a flag post).

We’d like to see the iPad mini 5, and indeed all Apple’s tablets, move towards using the Apple Pencil 2 instead, which is much more useful and charges by clipping it magnetically to the slate.

This seems unlikely, given the Apple Pencil 2 is reserved for the high-end iPad Pros right now – but this is a wish-list, not a predictions list.

The new iPad Pros in 2020 have LiDAR scanner, and it’s rumored the iPhone 12 will too. This is used for AR, which Apple has been making a big push towards in the last few years, but AR’s not exactly for everyone.

We’d like to see the iPad mini 6 ship with no LiDAR scanner – not everyone wants, or cares about, AR, and many might feel annoyed if Apple tries to push it on us all.

If there was no LiDAR scanner on the new iPad mini, the price could well be a little lower, and most buyers will likely prefer a low price over a potentially-useless scanner.