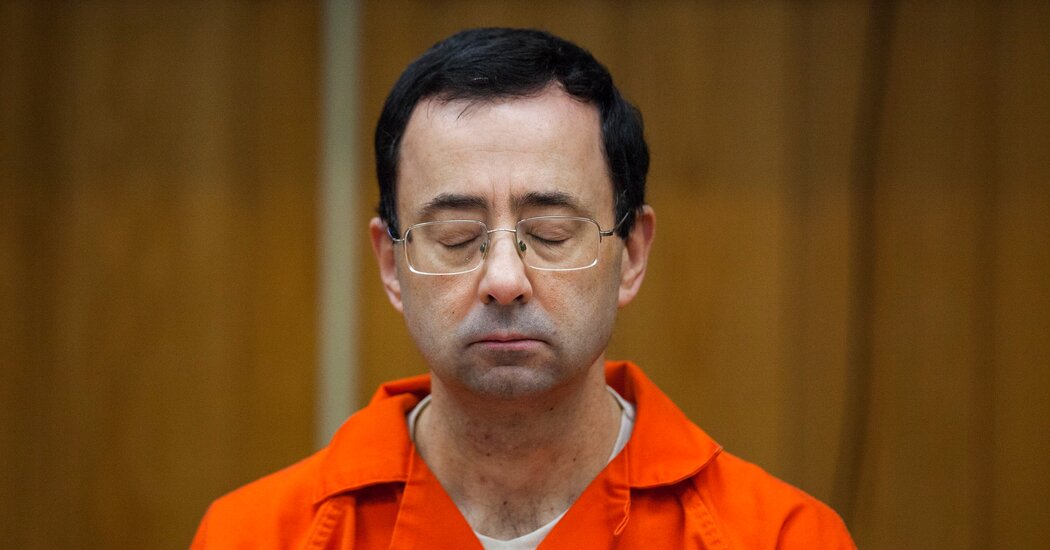 Mr. Nassar, who is serving what amounts to life in prison, has been accused of abusing hundreds of female patients — including the Olympic champion Simone Biles and a majority of the last two United States women’s Olympic gymnastics teams — under the guise of medical treatment. He continued to abuse 120 patients — including one as young as 8 — for more than a year after the F.B.I. learned in 2015 that three national team gymnasts had complained about him, said John Manly, a lawyer for many of the victims.

The inspector general’s report said senior F.B.I. officials in the bureau’s field office in Indianapolis failed to respond with urgency and the investigation was not picked up until after a September 2016 report by The Indianapolis Star detailed Mr. Nassar’s abuse.

F.B.I. officials in the office also “made numerous and fundamental errors when they did respond” to the allegations and failed to notify state or local authorities of the allegations or take other steps to address the ongoing threat posed by Mr. Nassar, the report said.

According to the report, the lead F.B.I. investigator in Indianapolis, special agent W. Jay Abbott, also lied to the inspector general’s office numerous times when it asked him about the way the Nassar inquiry had unfolded. He gave false statements “to minimize errors made by the Indianapolis Field Office in connection with the handling of the Nassar allegations.” The report also said Mr. Abbott violated F.B.I. policy when he spoke with Steve Penny, then the president and chief executive of U.S.A. Gymnastics, about potential job opportunities with the U.S. Olympic Committee, even as the two discussed the allegations against Mr. Nassar. Mr. Abbott subsequently applied for a job at the U.S.O.C., but twice lied to the inspector general about seeking that job.

Mr. Abbott, who retired in January 2018, according to the report, could not be immediately reached for comment.

Even when the F.B.I.’s handling of the case came under scrutiny from Congress, the media, and bureau headquarters in 2017 and 2018, Indianapolis officials did not take responsibility for their failures, the report said. Instead, it said, officials in the Indianapolis office provided “incomplete and inaccurate” information in response to the media and the agency’s internal inquiries.

Because of the failures, the F.B.I. and local authorities were delayed by more than a year in initiating their investigations, which ultimately found that Mr. Nassar had sexually assaulted more than 100 women and girls and that he possessed child pornography, which led to convictions in federal and state courts, the report said.

The mistakes, including the agency’s failure to notify F.B.I. officials and local police in Lansing, Mich., where Mr. Nassar practiced near Michigan State University, failed to keep Mr. Nassar from harming even more victims, the report said.

“As the Inspector General made clear in today’s report, this should not have happened,” the F.B.I. said in a statement on Wednesday. “The F.B.I. will never lose sight of the harm that Nassar’s abuse caused. The actions and inactions of certain F.B.I. employees described in the report are inexcusable and a discredit to this organization.”

The statement said that the agency had taken steps to ensure that “those responsible for the misconduct and breach of trust no longer work F.B.I. matters.”

The F.B.I. said it had also made changes to ensure that serious allegations such as those leveled against Mr. Nassar are promptly shared within the F.B.I. and with other law enforcement agencies. “We will take all necessary steps to ensure that the failures of the employees outlined in the report do not happen again,” the F.B.I. said.

Knowing more about the F.B.I.’s handling of the case has been important to many victims — including Olympic gold medalists and recreational gymnasts — who are still seeking justice for Mr. Nassar’s crimes that went unchecked for decades. More than 200 of them are suing U.S.A. Gymnastics, saying Mr. Nassar had sexually abused them, but those lawsuits were put on hold when the federation filed for bankruptcy in December 2018.

Earlier that year, the Nassar sexual abuse scandal shook the sport, and more than 150 girls and women testified at Nassar’s initial sentencing hearing in a Michigan courtroom. Each confronted Mr. Nassar and described how they were affected by the abuse. Many spoke through tears.

Reeling from the scandal, U.S.A. Gymnastics, the sport’s governing body, filed for bankruptcy in 2018.

In 2020, the organization offered to pay $215 million to settle legal claims brought by athletes who said they were sexually abused by Mr. Nassar. The offer came after more than 300 plaintiffs, including Olympic gymnasts, sued U.S.A. Gymnastics for failing to protect them from Nassar.

In 2019, a U.S. Senate report found that officials from the United States Olympic & Paralympic Committee, U.S.A. Gymnastics, Michigan State University and the F.B.I. “sat on evidence of his sexual misconduct for over a year — allowing for the additional sexual abuse of dozens of other girls.”