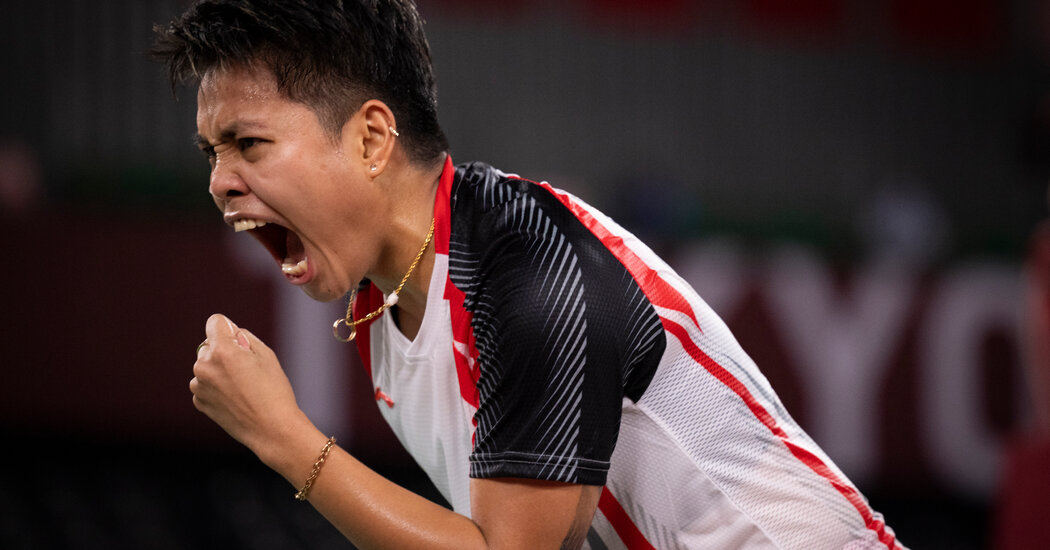 Indonesia has won Olympic gold in only one sport: badminton.

On Monday, the world’s fourth most populous nation notched another badminton victory when Greysia Polii and Apriyani Rahayu claimed gold in the women’s doubles event. It was the first gold for Indonesia at the Tokyo Games and the eighth in the country’s Olympic history.

Polii and Apriyani overwhelmed the former world champions, Chen Qingchen and Jia Yifan of China, in straight sets, 21-19, 21-15, delivering precision strikes of the shuttlecock combined with fluttery shots that left their opponents lunging in vain. Toward the end of the match, Polii had to race off court midrally to change her racket because of a busted string but returned to win.

Badminton is a national sport in Indonesia, where shuttlers take whatever space they can find to play: a clearing in a palm-oil plantation, a jetty on a far-flung island or a strip of cement between high rises. The Olympic sport’s medal count is dominated by Asian countries, like China, Indonesia and South Korea.

Polii, 33, is a badminton veteran, having first competed in the 2012 London Games. But her debut was inauspicious. To secure a better draw, she and her partner tried to lose an early match, Olympic organizers determined. The Indonesians, along with several other pairs, were disqualified.

Unsporting behavior has plagued badminton in recent months. The sport’s governing body this year banned three Indonesian players for life for match-fixing and betting. Another five were fined and suspended for up to 12 years.

After the 2016 Games in Rio de Janeiro, where she and her former partner made it to the quarterfinals, Polii was getting ready for retirement. But Apriyani, a decade younger, convinced her to stick it out for one more Olympics. They came into the competition in Tokyo unseeded.

Indonesia has been consumed by the coronavirus, which has made the country one of the most dangerous places in the world. The Delta variant is coursing through the sprawling archipelago as vaccination rates remain low.

Indonesia is the world’s largest Muslim-majority country, although it has a significant Christian minority and adherents to other faiths. While sectarian tensions have simmered over the years, sometimes with fatal consequences, badminton doubles players have often been from mixed backgrounds, like Apriyani, a Muslim, and Polii, a Christian.

After the pair’s victory on Monday, a politician from an Islamist party praised them on Twitter.

“This gold medal is a sweet gift for Indonesia, which is still fighting against the pandemic,” wrote Mardani Ali Sera, a lawmaker for the Prosperous Justice Party. “Thank you to all Indonesian athletes who have fought and are still fighting. Indonesians are supporting and praying for you.”