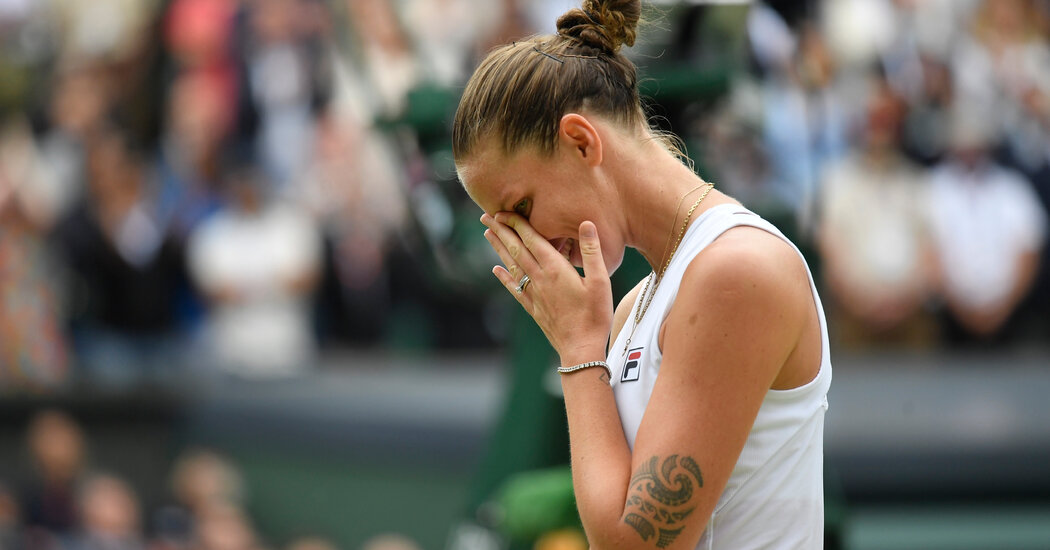 WIMBLEDON, England — Karolina Pliskova was happy with how she had played in the Wimbledon final on Saturday, despite a disastrous start — she lost the first 14 points of the match — and the fact that it ended in a 6-3, 6-7 (4), 6-3 loss to Ashleigh Barty.

Where Pliskova disappointed herself, she said, was after the match. “I never cry — never!” Pliskova said as she began tearing up during the trophy ceremony. “And now?”

In her news conference more than an hour later, Pliskova said that she had “never had a better moment in my career” and that she had been “more sensitive than I normally am” after receiving enthusiastic support from the crowd and the runner-up plate from Kate Middleton, the Duchess of Cambridge.

“I feel like, OK, cry in the locker room, but not on the court,” Pliskova said, chiding herself further. “Somehow, I could not. The people, they cheered so much. Just too many emotions.”

Tennis, as Pliskova knows well, offers harsh extremes of success and failure. A total of 128 women start a draw, and that number is halved in each round until only one remains to hold the trophy. The other 127 leave as losers.

“We both tried to win, so somebody has to lose,” Pliskova said with a small shrug. “You have to accept that. I will, definitely.

Pliskova’s career is, by some cold metrics, disappointing. She has played in the main singles draw of a Grand Slam tournament 36 times, 21 of those as a top-10 seed, and has yet to win a title. In her one previous appearance in a final, at the 2016 U.S. Open, Pliskova led Angelique Kerber, 3-1, in the third set before the German surged back to win the title.

But Pliskova has also reached No. 1 in the WTA rankings, having spent eight weeks in the top spot in 2017, which proves to be a rarer achievement. Since the rankings began in November 1975, only 27 women have reached No. 1, while 51 women have won major singles titles.

“I realized now, in the last two years, that even if I don’t win a Grand Slam, there are some girls that they win one and then they never win anything anymore — they are not even top 10; they can’t hold the level,” Pliskova said in an interview earlier this week. “Honestly, I don’t know what’s better. And with age, I somehow appreciate the level which I’ve been able to hold more. Maybe that’s even more difficult than to just have an amazing two weeks once in life.”

In a time of instability in women’s tennis and myriad two-week wonders, Pliskova has proved to be a paragon of consistency. Last week she slipped out of the top 10 for the first time in 230 weeks; next week, on the strength of her run to the final, she will return.

Though Pliskova made her top-10 debut less than five years ago, her staying power clearly left an outsize impression on Barty, who guessed that Pliskova had been “one of the most consistent on the tour” for a range of “five or 10 years.”

“A lot of the time, I feel like she’s underestimated,” Barty said of Pliskova. “She is one hell of a competitor. She wants it extremely badly. She fights so hard for every point. She’s genuinely invested absolutely 100 percent in every point. You have to bring your best and be engaged for the whole match to compete with her.”

Barty, who has won both major finals she has contested, gave Pliskova a vote of confidence. “She’s always been there, always been knocking on the door, always giving herself the opportunity,” Barty said. “I know that Grand Slam title for her is not far away.”

Though players are contending deep into their 30s more than ever before, it is impossible to know how many more opportunities will come for Pliskova, 29, who remains the only active player in men’s or women’s tennis to have reached No. 1 without having won a Grand Slam tournament.

For Amelie Mauresmo, Simona Halep and Kim Clijsters, a first Grand Slam title came within a couple of years of their reaching the top spot in the rankings.

And for some other top-ranked players, like Marcelo Rios, Dinara Safina and Jelena Jankovic, it never came at all.

“Of course my dream is always going to be now, forever, to win the Grand Slam — I’m trying to do that since I started actually to play tennis,” Pliskova said. “Of course I’ve reached some goals which I always wanted. This is going to be, always, my goal for now.”

Pliskova said that the run at Wimbledon would give her “more trust, more belief, more of everything to go in the next Grand Slams,” starting with next month’s U.S. Open. “There’s still a chance,” she said. “I played the final there, so it’s not impossible. I will always try, so let’s see.”

Pliskova’s hunger remains, but so too does her ability to cope with disappointment, which is a skill she said “all the big champions and all the big names” had needed to learn.

“To accept that maybe somebody played better that day, or somebody is a bit better, for no matter for which reason, I think is also important,” Pliskova said. “Yeah, I know how to do that.”