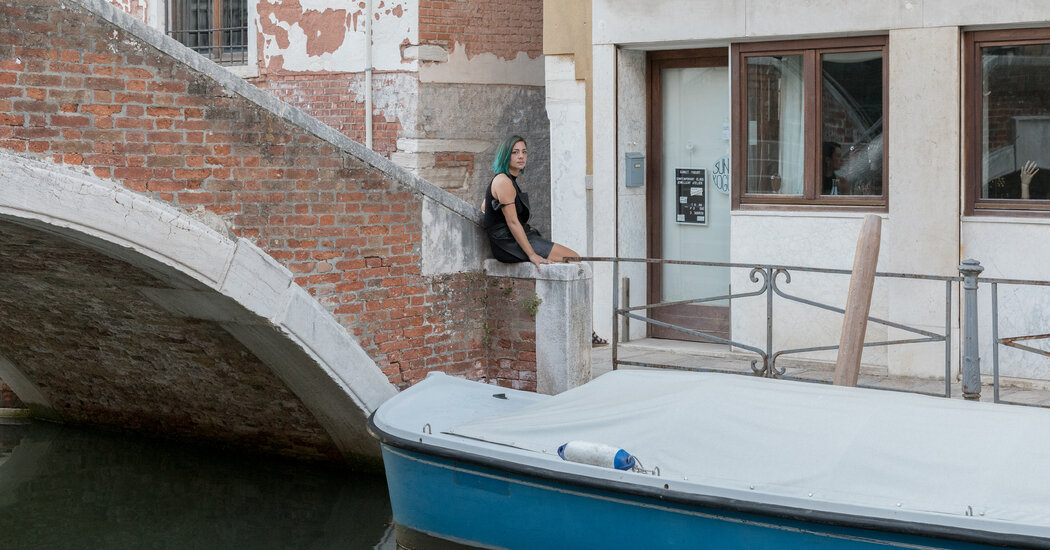 Venice has endured war, plague and conquest in its 1,200 years as Queen of the Adriatic, but after the last two years, many of its jewelers are struggling to stay open.

On Nov. 12, 2019, more than 85 percent of the 120 islands that make up the city were inundated with as much as six feet of water, a result of high tides and a storm surge driven by strong winds.

Leslie Ann Genninger, a glass jewelry artisan whose studio is in the Dorsoduro neighborhood, said her display tables were submerged. “The glass was broken so I had to redo about 80 or 90 percent of the pieces,” which took eight months, she said. Water was knee-deep in St. Mark’s Square, forcing the Nardi jewelry shop there to close for two months.

On March 9, 2020, the city’s first coronavirus lockdown was ordered. Since then the Veneto region, of which Venice is the capital, has been Italy’s second hardest hit region in the pandemic (following Lombardy), with more than 439,800 cases reported as of early this month.

The two disasters turned Venice from a crowded tourist hub into a city where its approximately 258,000 residents were almost alone. “It was a beautiful, empty, surrealistic Venice,” Ms. Genninger said.

Now that tourists have been returning, despite the spread of the Delta variant, the jewelers are trying to recover.

Alberto Nardi, 54, whose shop front spans five arches of the gallery edging St. Mark’s Square, would not detail his revenues but said the business lost 30 percent of its sales year over year. He has reduced the store’s opening days and hours, to cut costs, and has introduced customer appointments.

“We have to show to clientele that we are different, and that’s the only possibility that we have to survive” against the big-budget megabrands, said Mr. Nardi, who plans to introduce two collections during the Venice Film Festival in September.

And if the almost 100-year-old Nardi brand is concerned, imagine the difficulties of lesser-known businesses. “Jewelers in Venice aren’t that big anymore in the market today,” Leo Criaco, jewelry specialist at Christie’s in Geneva, wrote in an email. He cited as an exception Nardi, which is famous for its Moretti pieces. (Also known as Blackamoor, the designs feature the head of a man in ebony or onyx or painted black and have come under some criticism lately.) He also cited the Venetian artisan Attilio Codognato.

But, he added, “we rarely have big pieces (if any) from them.”

Tom Burstein, a Connecticut-based jewelry sales and acquisitions specialist, agreed, comparing Venice’s jewelers with brands in world capitals. “If you think of Paris, you immediately think of Cartier and Van Cleef & Arpels,” he said. “If you think of London, you think of Graff and Asprey. In the U.S., Tiffany and Harry Winston. Bulgari, Rome,” he said. “And then in Venice you really think of two primary jewelers, Nardi and Codognato.”

But, he added, “in such a small concentrated area, it would be difficult to get more than two or three global brands out of that area,” he said.

Also, “there’s no really mass defining style that has come from Venetian jewelers that people find synonymous with the name,” Mr. Burstein said, “the way there is when you think of the Alhambra that everybody in the world knows what that is, therefore they learn the house of Van Cleef & Arpels. There hasn’t been that type of design that’s reached a mass audience to bring the Venetian jewelers to the fore.”

While Venice does share Italy’s rich tradition of gold work, what sets it apart is its use of glass — “which you find only in Venice,” said Camilla Grimaldi, the owner and director of a Tuscany wine estate and the chief art officer at the online gallery Kovet.Art. Her jewelry collection includes pieces by Codognato and other Venetian artisans.

Ms. Genninger, 62, has a client list that includes Grace Jones and Elton John. She chooses the design, colors, shapes and processing techniques for her glass art pieces, consulting with her bead master, a specialist who works from an atelier in the Lido. Once the beads are created, Ms. Genninger strings them on braided stainless-steel wire or wrapped multistrand wires to form her creations.

Most of the 20 artisans with whom she works are based on the island of Murano, a glass-blowing center since the 13th century, while some are based on the nearby island of Giudecca and in the city center. “I walk and take a vaporetto,” she said, as, in Venice, “you can’t just get in a boat and find a parking lot.” A visit to eight artisans or factories could take from 8:30 a.m. to 7:30 p.m., she said.

The artisans all have their own specialties, she said. But since the pandemic started, “a lot of factories on Murano are down to a very core group of workers. They might have had 10 and now they are down to two or three.”

Some of her creations use multiple techniques, like the Cobalto Astratto Filigrana necklace (550 euros, or $649), made of glass beads that were hand blown, flame worked and oven heated, rolled and pulled to create the lines. Colors are created by layering 24-karat yellow gold, white gold or silver leaf inside each bead “because we want different tonalities,” she said.

Ms. Genninger began her career in investment banking, but moved into glass jewelry in 1988, teaching herself along the way, and finally opening her own brand in 1997 with money she made by organizing the production of chandeliers, mirrors and similar pieces for the Bellagio Hotel in Las Vegas. The business, Genninger Studio, now relies on sales revenue, but it continues to be a small operation: It is just her and one weekend employee, who was furloughed from March 2020 to June. Her prices range from €25 to €2,000.

While she would not disclose its annual revenues, she estimated that 2020 sales dropped by 70 percent year over year.

She said she survived by selling to clients and collectors through Zoom. She also sells pieces through the online operations of places like the Museum of Glass in Tacoma, Wash., and the Montague Gallery in San Francisco.

Some of Venice’s younger jewelers are embracing glass jewelry, too. Just not in the same manner.

Cosima Montavoci, 33, said she decided to work with glass as its pop vibe “makes it, kind of, funnier, less formal and more everyday,” she said.

Set in a former butcher’s shop, the studio she opened to the public in February 2019 has a similar aesthetic. “I made a curtain that is bloody and hang the display on the meat hooks,” she said. “I didn’t want something to be pretty. I wanted something that would hit people in the guts.” Her work also is sold on websites like JewelStreet.com and Veniceoriginal.it as well as in stores such as Die.busenfreundin in Vienna.

The business is named Sunset Yogurt because “when glass is white-hot, it is the consistency of yogurt and the color of sunset,” she said. “It’s the magic moment for me and why I fell in love with the material.”

She pays for her business through sales as well as jobs that include waitressing and being a movie stand-in. (Her studio appeared in Andrea Segre’s film “Molecule,” which was screened before the 2020 Venice Film Festival.)

Ms. Montavoci creates her own glass, making the shapes and patterns under a flame that is 1,200 degrees Celsius (2,192 Fahrenheit) and assembling the metal parts. So “it’s quite easy to burn yourself,” she said, “and some parts can explode.”

For now, she commissions a local goldsmith to make her metal elements or finds them in flea markets, but her goal is to make the metal parts.

“You have to experiment a lot” with glass jewelry, she said, even with the flat, patterned beads of the Margherita Ivory necklace, which are threaded with a leather string (€320). “Lying down it can look amazing, but it also needs to be related to the body so it needs to be something that when you move, moves with you,” she said. “That is why every time I create a new piece I wear the first version for a couple of days or week, depending on the material.”

Now she is planning to learn about precious and experimental materials in a program at Alchimia Contemporary Jewelry School in Florence.

It is that kind of planning that reflects jewelers’ optimism about the city’s future, even though Anna Teresa Palamara, director of the Department of Infectious Diseases at the National Health Institute, said the Delta variant is spreading through the country. And even though the city has begun restricting cruise ships that weigh more than 25,000 tons from sailing down the Giudecca canal to the historic center, forcing the ships — and their passengers — to relatively distant docks.

According to Ms. Genninger, the city’s recovery is going to take another couple of years. “We want it to come back with changes so that the city is respected more,” with less overcrowding, she said — perhaps making jewelry shopping more appealing.