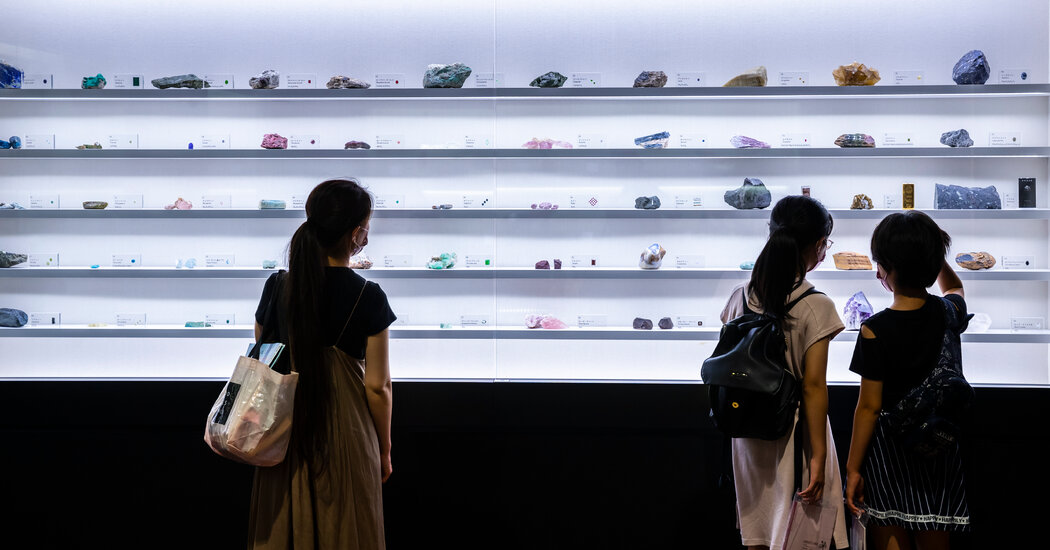 KOFU, Japan — To most Japanese, the Yamanashi prefecture, just southwest of Tokyo, is known for its vineyards, hot springs and fruit, and for being home to Mount Fuji. But what about its jewelry industry?

“Visitors come for the wine, but not so much for the jewelry,” said Kazuo Matsumoto, chairman of the Yamanashi Jewelry Association. Yet, Kofu, the capital of Yamanashi, with a population of 189,000, houses around 1,000 jewelry-related companies, making it the most important jewelry producer in Japan. Its secret? The presence of rock crystal (tourmaline, turquoise and smoky quartz, to name three) in its northern mountains, part of a generally rich geology. It is all part of a tradition that goes back two centuries.

Located just one and a half hours away by express train from Tokyo, Kofu is surrounded by mountains on all sides, including the southern Japanese Alps and the Misaka range, with spectacular views of Mount Fuji (when it is not hidden behind clouds). Just a few minutes’ walk from the Kofu train station sprawls the Maizuru Castle Park; the castle tower is gone, but the original stone walls remain.

According to Mr. Matsumoto, the Yamanashi Jewelry Museum, opened in 2013, is the best place to learn about the prefecture’s jewelry industry, specifically the design and polishing steps of the process. At the small but exhaustive museum, visitors can try polishing gems or processing silver in various workshops. Over the summer, children can fill a four-leaf clover pendant with a colored glassy glaze as part of a cloisonné enamel-themed exhibit. (On Aug. 6, the museum announced that it would close temporarily to prevent the spread of Covid-19 infections; on Aug. 19, it said it would be closed until Sept. 12.)

While Kofu has restaurant and shop chains similar to most midsize Japanese cities, it has a relaxed vibe and an agreeable, small-town feel. On a visit earlier this month, everyone seemed to know one another; Mr. Matsumoto was greeted by several passers-by as we walked around the city.

“It feels like a family community,” said Youichi Fukasawa, a Yamanashi-born craftsman, who demonstrates his skills to visitors at an atelier inside the museum. He specializes in the prefecture’s signature koshu kiseki kiriko, a gem cutting technique. (Koshu is the old name of Yamanashi, kiseki means gemstone and kiriko is a style of cutting.) Gems are given multifaceted surfaces through a traditional grinding technique, while the cutting process, done freehand with a spinning blade, gives them highly reflective patterns.

The patterns, mostly traditionally set, are engraved on the back of the gem on purpose, and they show through the other side. It creates an optical illusion of sorts. “Through the dimension you can see the kiriko art, and from the top and the side, the reflection of the kiriko cut,” Mr. Fukasawa explained. “Every angle shows a different reflection.” He demonstrated how to achieve different kiriko patterns by using different types of blades and adjusting the size of the grains in the abrasive surface used in the cutting process.

The techniques all originated in Yamanashi and have been passed down through generations. “I inherited techniques from my father, who was also a craftsman,” Mr. Fukasawa said. “The techniques are essentially the same as the ones from the olden days, but each craftsman adds their own interpretation, their own essence.”

The Yamanashi jewelry industry has its roots in two different areas: crystal crafts and decorative metal works. Chika Wakatsuki, the museum’s curator, explained that in the mid-Meiji period (the late 19th century), they were combined to produce personal ornaments such as kimono and hair accessories. Businesses equipped with machinery for mass production started to pop up.

World War II, though, took a heavy toll on the industry. In 1945, according to the museum, most of the city of Kofu was destroyed in air raids, and the traditional jewelry industry that had been the city’s pride was in decline.

“After the war ended, the industry bounced back because of the high demand for crystal jewelry and Japan-themed souvenirs from occupying soldiers,” said Ms. Wakatsuki, as she displayed small ornaments engraved with Mount Fuji and five-story pagoda patterns, as if the images were frozen inside the crystal. During the period of rapid economic growth in postwar Japan, as the population’s taste became more selective, the Yamanashi industry began crafting higher-grade jewelry using diamonds or colored gemstones set in gold or platinum.

“But since people mined the crystal freely, it led to accidents and problems, and to an exhaustion of the supply,” Ms. Wakatsuki said. “So, mining stopped about 50 years ago.” Instead, large quantities started to be imported from Brazil, and mass production of Yamanashi crystal goods and jewelry continued, with the market expanding both in Japan and abroad.

The Yamanashi Prefectural Jewelry Art College, the only non-private jewelry school in Japan, opened its doors in 1981. Located across the road from the museum, on two floors of a commercial building, the three-year college is home to students hoping to gain a mastery of jewelry. The school has a capacity of 35 students per year, keeping the total around 100. Since the pandemic started, students have come to the school half the time for practical lessons; other classes have been remote. There are rooms for processing gemstones and precious metals; another dedicated to wax techniques; and computer labs, outfitted with two 3-D printers.

During a recent visit to a first-year classroom, where students learn the foundations of the craft, Nodoka Yamawaki, 19, was practicing engraving copper plates with a sharp tool. She chose to engrave an Egyptian-style cat surrounded by hieroglyphs. “It took me much longer to come up with the design than to actually engrave it,” she said.

One floor below, in a workshop-like classroom, a handful of third-year students were sitting at individual wooden tables topped with black melamine resin, setting the last gems or polishing their midyear school project the day before it was due (the Japanese school year starts in April). They each came up with their own designs of rings, pendants or brooches.

Keito Morino, 21, was putting the finishing touches on a brooch, a silver structure he paved with garnet and pink tourmaline gems. “I was inspired by JAR,” he said, referring to the firm founded by the contemporary jewelry designer Joel Arthur Rosenthal, as he displayed a printout of a butterfly brooch from the artist. As for his plans after graduation in March 2022, Mr. Morino said he had not decided yet. “I want to be involved in the creative aspects,” he said. “I’d like to work for a company for a few years to gain experience, then open my own studio.”

After the Japanese bubble economy burst in the early 1990s, the jewelry market shrank and became stagnant, all the while facing issues such as imports of foreign brands. Yet the employment rate for alumni is high, hovering above 96 percent between 2017 and 2019, according to the school. Job recruitment postings for Yamanashi-based jewelry companies cover a long wall section in a school hall.

Today, Yamanashi-made jewelry is mostly exported to popular Japanese brands like Star Jewelry and 4°C, but efforts are being made by the prefecture to establish its Yamanashi jewelry brand, Koo-Fu (a play on Kofu), and compete in the international market. Crafted by local artisans using traditional techniques, the brand offers affordable trend collections and a bridal line.

But the number of local artisans is declining, said Mr. Fukasawa, who graduated from the school 30 years ago (he now teaches there part time). He believes that technology can play an important role in making jewelry craftsmanship more popular with young people. He has acquired a sizable Instagram following of his own.

“Craftsmen in Yamanashi are focused on making and creating, not selling,” he said. “We are at the very opposite of the business side, as we traditionally stay backstage. But nowadays with social media, we can express ourselves online.”

He added: “As craftsmen, we used to be invisible, but not anymore.”