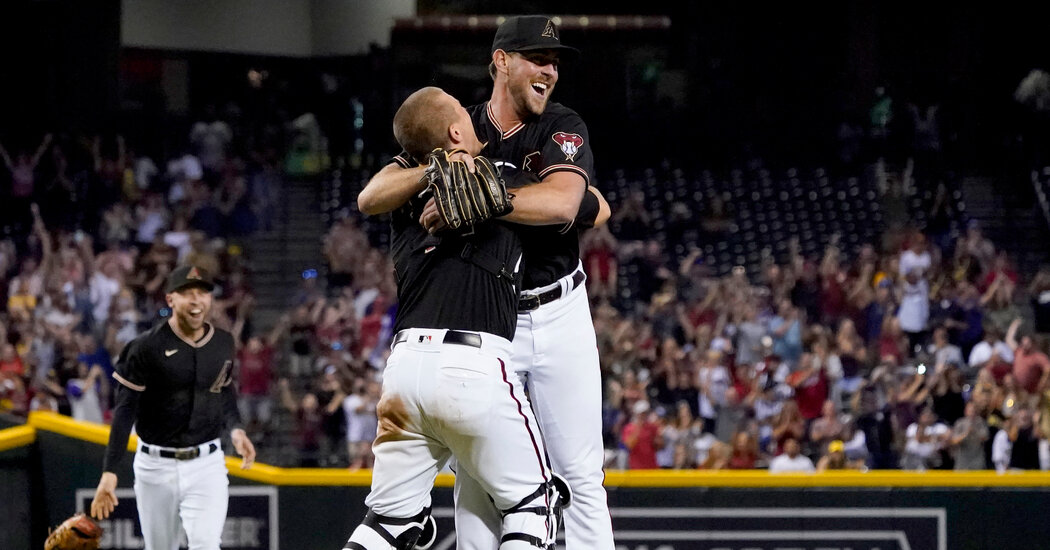 In the early days of baseball, the sport was mostly a test of hitting, fielding and base running. The pitcher was merely the fielder in the middle of the diamond who tossed the ball underhand — as if pitching a horseshoe — to home plate.

In 1884 the National League finally allowed overhand pitching, from a 6-foot-by-6-foot square 50 feet from the plate. That was the season Charles Radbourn, nicknamed Old Hoss, worked 678⅔ innings and pitched 73 complete games. It was also, for many decades, the last season with eight no-hitters.

Now we have another. On Saturday night in Arizona, the Diamondbacks’ Tyler Gilbert twirled a no-hitter in a 7-0 win against the San Diego Padres in his first career start. The pitcher he beat, Joe Musgrove, threw the first of this season’s eight no-hitters, in April against the Texas Rangers.

In between were no-hitters by Carlos Rodon of the Chicago White Sox, John Means of the Baltimore Orioles, Wade Miley of the Cincinnati Reds, Spencer Turnbull of the Detroit Tigers, Corey Kluber of the Yankees and four Chicago Cubs pitchers who combined for one (Zach Davies, Ryan Tepera, Andrew Chafin and Craig Kimbrel).

The first six gems — Musgrove through Kluber — all came before Major League Baseball began to strictly enforce its rules against foreign substances on the ball. Many pitchers had been using gripping agents to enhance the spin of their pitches, making them harder and harder to hit.

Gilbert, then, is the first pitcher with a complete-game no-hitter since umpires started checking gloves, caps and belts. (Triston McKenzie of Cleveland nearly did it, too, on Sunday in Detroit, before allowing a single in the eighth inning after retiring his first 23 hitters.)

Through Saturday, the major league batting average was still just .242, the lowest in the majors since 1968. So despite the cheating crackdown, it seemed like only a matter of time until someone tied the season record. The surprise was the pitcher who did it.

Gilbert, a 27-year-old lefty, had made only three relief appearances this month. He had earned a promotion with a strong showing at Class AAA for the Diamondbacks, who took him from the Dodgers in the minor league Rule 5 draft in December.

Gilbert never actually pitched for the Dodgers — who had acquired him in February 2020 from the Philadelphia Phillies for outfielder Kyle Garlick — because the pandemic canceled the minor league season. Gilbert was not invited to the Dodgers’ alternate training site, so he improvised at home in Northern California, throwing with his old high school coach and making some money on the side.

“I was working with my dad doing electrical work, too,” Gilbert said on Saturday, in a video news conference after the no-hitter. “That was fun, just trying to make ends meet, but it really made me realize how much I missed baseball, taking that summer off.”

Gilbert is not a hard thrower; his fastball averages 89.5 miles an hour. But he used his cutter effectively to play off his two-seam sinker and continued a rare weekend of highlights for the Diamondbacks, who were a major-league-worst 38-80 through Saturday. Daulton Varsho, who caught the no-hitter, had ended Friday’s game with a home run.

“I don’t think I could have better back-to-back days ever in my career,” Varsho said. “It’s been a ride.”

Varsho said he was especially happy that Gilbert’s family was at Chase Field in Phoenix to witness his masterpiece. The ballpark has been home to the franchise since its inception in 1998, but Gilbert was the first Diamondbacks pitcher to throw a no-hitter there. The team’s previous two had come on the road — Randy Johnson’s 2004 perfect game in Atlanta and Edwin Jackson’s eight-walk, 149-pitch adventure at Tampa Bay in 2010.

Gilbert needed 102 pitches on Saturday, and while Torey Lovullo, the team’s manager, said he wanted to keep him to 85 or so, he gave him a chance to finish after Gilbert zipped through the eighth.

“It was weird: I wasn’t nervous at all,” Gilbert said. “I felt like I should have been. I don’t know why. I kept just going out there and doing my thing. I was really nervous leading up to the game, but after that three-pitch eighth inning, I was like, ‘OK, this is possibly going to happen.’ I just kind of stayed levelheaded and kept making pitches.”

He started the ninth by getting his fourth and fifth strikeouts, then faced Tommy Pham, the Padres’ leadoff man. Pham was the only Padre to reach base against Gilbert, who walked him three times. This time, Pham swung at the first pitch, punching a fly to center that Ketel Marte nabbed to end the game.

The Padres hit several balls hard, and Gilbert’s five strikeouts matched the fewest in a no-hitter since 2013. But in the broad view — after twice being cast off by other teams, never appearing on a top prospect list and missing last season — Gilbert was due for some good luck.

“It’s what the game of baseball is all about,” Lovullo said. “As long as you have a uniform, as long as you give the right effort, anything is possible.”

Even a feat that had not been accomplished in 68 years. The last pitcher to throw a no-hitter in his first start was Bobo Holloman of the 1953 St. Louis Browns. Two others did it in the 19th century: Bumpus Jones of the 1892 Reds and Ted Breitenstein of the 1891 Browns in the first American Association, which is considered a major league.

“I’d rather be doing this than pulling wires,” Gilbert said. “No offense, dad.”