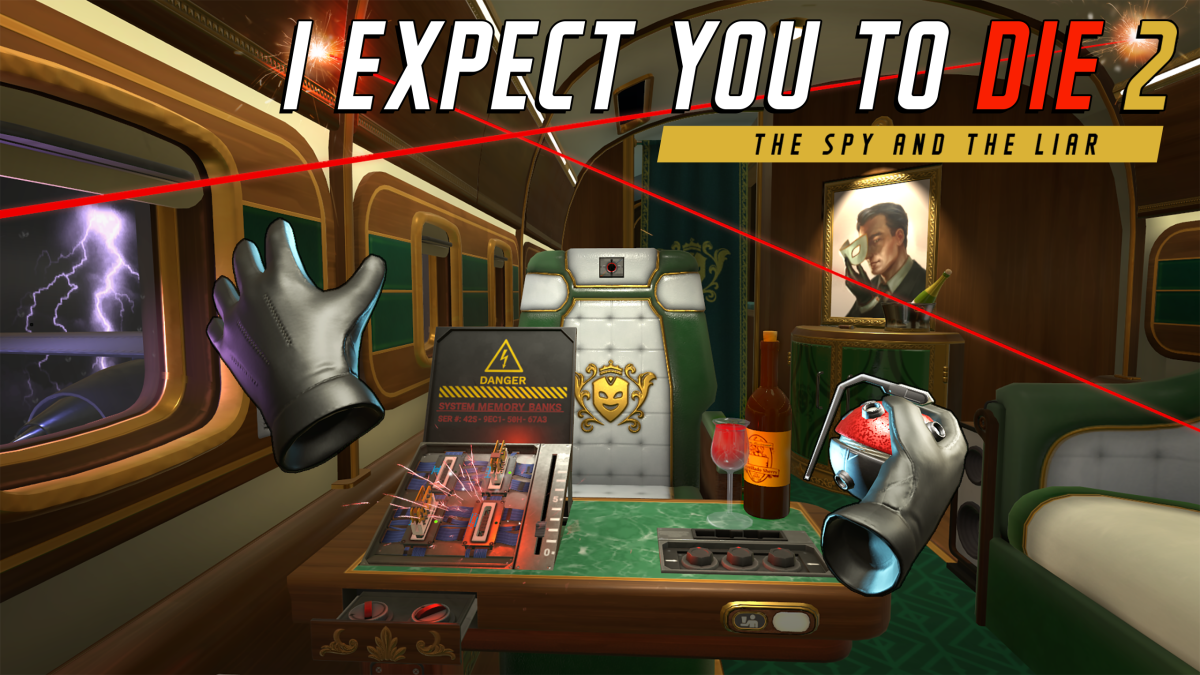 If the game’s name and James Bond-inspired opening cinematic didn’t clue you in, I Expect You To Die 2 is a VR title that pays homage to the best classic spy movie tropes. From over-the-top plans for world domination to kooky laser death traps, your VR headset will thrust you into the center of the missions as you continue your adventure to stop the evil Zoraxis organization.

We had the chance to try out the game before it launched, and we had an absolute blast playing it. While our various failures had us feeling more like Austin Powers than a debonair superspy, each explosion and laser through the face just made finally solving a stage that bit more satisfying.

If you’ve ever dreamed of being the next 007, or are looking for an escape room-esque experience to play at home, this laugh-out-loud VR title could be exactly what you’re looking for. It provides a great balance of grand adventure, with humor and charming characters to boot with only the odd issue to mar our time with it.

I Expect You To Die 2 price and release date

I Expect You To Die 2 picks up its story not long after the events of the first game and its DLC, continuing your character’s battle against Zoraxis. While you probably don’t need to have played the original to understand what’s going on, we’d recommend giving it a try; it’s an absolute delight filled with even more spy-themed disasters for you to survive (and should help set up the events of the sequel too).

Regardless of whether you go back to play the original or not, you’ll find a lot to love about this game’s plot. Sure, it’s filled with more than its fair share of tropes (right down to the way too detailed villain monologue) but from a spy-themed VR experience that’s exactly what you want.

During your adventure, you’ll have several run-ins with celebrity extraordinaire John Juniper, voiced by Wil Wheaton. Wheaton’s performance gives Juniper this charming quality that you can’t help but fall in love with and his presence makes this VR experience feel less lonely than some other puzzle adventure titles.

Of course, spy clichés also mean traps galore and boy does this game deliver. As you would expect from a VR puzzle game, every level requires you to outsmart the deadly contraptions prepared by the game’s antagonists. While many of the perils will be in-your-face and obvious (such as giant buzzsaws), others are much more sneaky. Booby-trapped drawers and poisoned wine bottles force you to be careful as you scour the entire space for clues, one wrong move could be your last.

Whatever the puzzle, it’s a delight to solve many of them as you can always rely on classic spy movie tricks. A favorite of ours is reflecting deadly lasers with reflective surfaces; it was such a great moment nervously moving a mirror in front of the beam to then realize that our trick worked like a charm.

Some puzzles are a lot more fun than others though, and in this shorter experience, the less enjoyable moments stick out. Puzzle game fans will however appreciate that you never have to rely on trial and error to succeed. If you can’t ever find a way forward, you’ve probably just missed a vital clue hidden in a document or haven’t located the right tool yet. While the game expects you to die, you never have to discover how to progress.

Anyone can become a superspy

Depending on how quickly you can decipher the game’s various puzzles, you should be able to finish the main story in just a few hours, but just because you’ve seen how it all ends doesn’t mean you’re finished. To add replayability to each of the game’s levels, Shell Games has given each stage bonus secret objectives for you to complete.

These hidden puzzles add a lot to the enjoyment of going back into a level – especially because once you know how to navigate the main traps you’ll find solving the mission is too trivial to warrant a second run through otherwise. Unless you’re looking to become a speedrunner, of course.

The only other issue is that handling objects in virtual reality can still feel a little clunky at times, though this is true of many VR games played on the Oculus Quest 2. Thankfully I Expect You To Die 2 is very forgiving, and rarely did we find our progress was impacted heavily by fiddly maneuvers.

As far as accessibility goes, I Expect You To Die 2 is one of the better examples in VR. The whole game is played sitting down, and thanks to your character’s experimental psychic implants, you’ll never have to leave the chair to pick something up.

If you struggle with moving in virtual reality because of  motion sickness or for any other reason, this is a game where you shouldn’t have to worry about it. For the best experience we’d recommend sitting on a desk chair away from any tables or other furniture to give you more freedom to swivel around, on more than one occasion we did try to reach through our couch to pick something up.

I Expect You To Die 2 is one of the most enjoyable VR games we’ve played recently. If you adore spy films like Goldfinger, and have always wanted to test your wits against various traps for yourself, or are looking for a title that’ll still make you laugh as you fail miserably – this is the game for you.

Sure, elements of the story can get a little cliche (meaning you might see a few twists coming from a mile away) but the puzzles at the game’s core are a delight to solve. Thanks to the game being a seated experience, it also means it’s one of the more accessible games out there for both newer and veteran VR users.