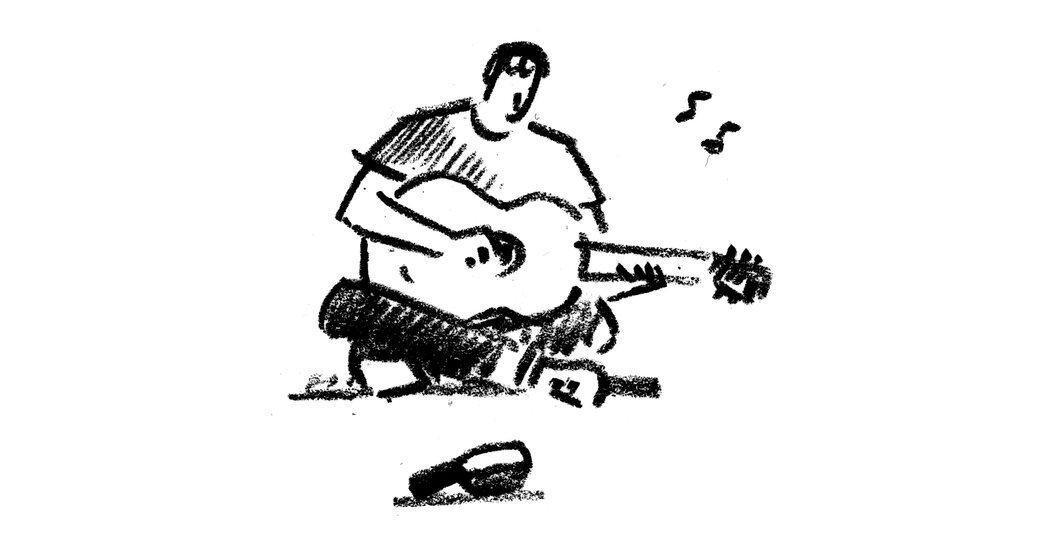 I was walking to the East Village from my apartment in the West Village. I had $10 to my name and was hungry for Indian food.

Just past Washington Square Park, I came across a guy who was sitting on the curb with a guitar. He had a hat turned upside down with a few coins in it. He was between songs and had on a faded gray T-shirt that said “The Clash” in letters that were barely legible.

On a whim, I sang (badly) Mick Jones’s first lines of “Something About England” from “Sandinista.”

“They say the immigrants steal the hubcaps of respected gentlemen. They say it would be wine and roses, if England were for Englishmen again.”

He looked up, and sang a couple of Joe Strummer’s lines from later in the song: “I missed the fourteen-eighteen war, but not the sorrow afterwards. With my father dead, my mother ran off, my brothers took the pay of hoods.”

People passed by. He kept singing, getting the lyrics mixed up as he went, but squeezing them all in anyway. (That’s OK, I thought. Strummer did that too.)

When he’d finished singing, he strummed his muted strings, waiting for me to jump back in.

He looked up and gave me a nod.

“You, too, Joe,” I said, bending down to put the $10 I had planned to spend on Indian food in his hat before continuing on my way.

It was a June day in 1954, and the city was buzzing over that night’s heavyweight championship fight between Rocky Marciano and Ezzard Charles at Yankee Stadium.

I was the newest copyboy at The New York Journal-American and on the verge of going into the Army. The city editor called me over and asked me to do an errand in Midtown that involved picking up a carton of boxing gloves.

As I rode the subway back to the office, another passenger noticed that the label on the carton said “boxing gloves.”

“Is that for tonight’s fight?” he asked.

I was sure it wasn’t, but the coincidence gave me a nice feeling.

I was on my way to my first job, standing at the corner of 52nd Street and Second Avenue and waiting for the light to change.

Suddenly, I felt my body being lifted off the ground by someone much bigger. I could not see who it was, but I did not feel threatened, just confused.

After I regained my balance and composure, I looked up to see that it was an old friend of my father’s.

“You looked like you needed a hug,” he said with a smile.

I was home from college on a break and had come into Manhattan to visit my brother.

I stopped at a pay phone to call and tell him that I was running late. I pulled a scrap of paper with his number on it from my wallet.

When I got to his place, he greeted me with “So, you lost your wallet.”

He said he had gotten a call from a woman who had found the wallet in a phone booth and called the number she found in it.

“She’s waiting for you with your wallet in a bar,” he said. “Here’s the address.”

I hurried across town to the bar, where a middle-age woman having drinks with some friends caught my eye.

I walked over, she handed me the wallet and I thanked her profusely.

“May I buy you a drink?” I asked, feeling that some gesture of gratitude was appropriate.

After a quick visit to the Guggenheim, my friend John, who was visiting from out of town, and I had just enough time to get a cab to his Midtown hotel so that he could grab his luggage and catch a shuttle to Kennedy Airport.

It was a beautiful spring Saturday. The streets were bustling, and the cabs racing down Fifth Avenue past the museum were all occupied. One finally stopped for us, but as I reached for the door handle, a man and woman who were together reached for it too.

I hated to be rude, but I nearly shoved John into the cab.

When we got to the hotel, we dashed through the lobby and pressed the elevator button. One arrived, and we stepped in along with some other people. When the doors closed, we found ourselves face to face with the couple we had taken the cab from.

“I thought you had to catch a plane,” the woman said.

Read all recent entries and our submissions guidelines. Reach us via email [email protected] or follow @NYTMetro on Twitter.