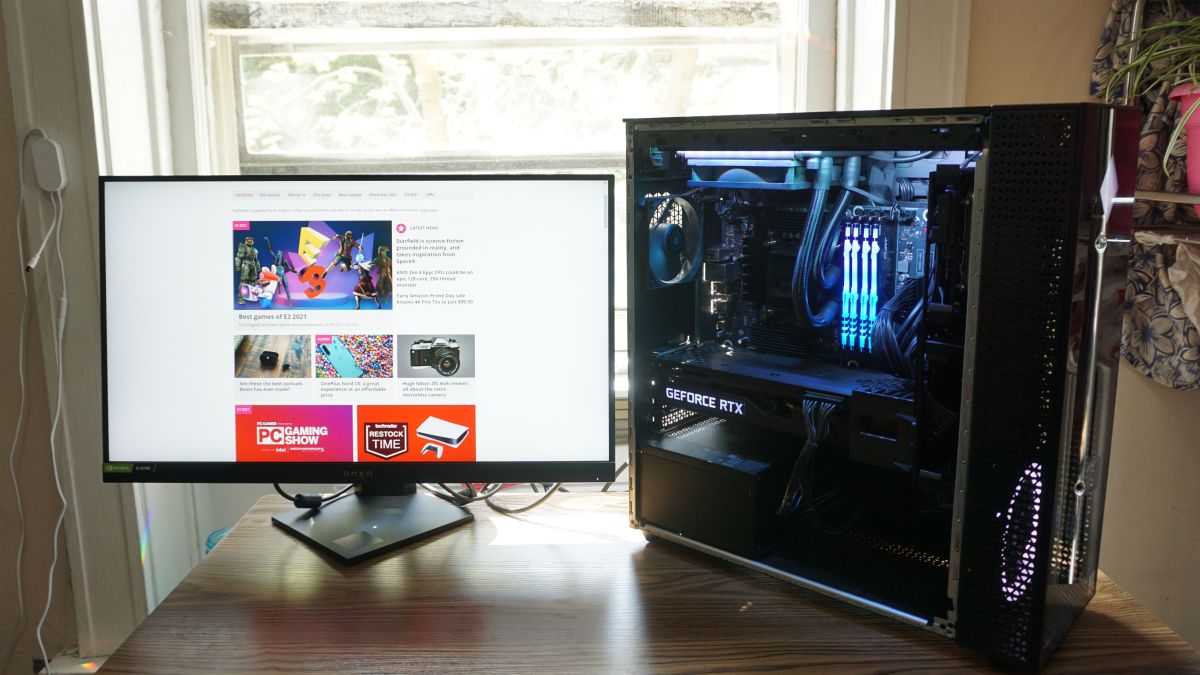 The HP Omen 25i, launching July 2021, is designed as an upgrade to the similarly named HP Omen 25. This new gaming monitor drops the old TN panel and upgrades it to an IPS panel with a few other upgrades, but it also comes with a price hike. The HP Omen 25i comes in at $349 (about £250, AU$450). Though the price makes sense when compared just to the predecessor, it brings it into a market that’s loaded with gaming monitors that don’t give it much room to stand out.

We’ll get into the HP Omen 25i’s specifics shortly, but it’s simply not keeping up with the competition when there are similarly priced and even cheap monitors that are matching it on almost all specs and then going beyond it, like the $339 (about £240, AU$440) Pixio PX279 Prime with its 27-inch, 240Hz display or the Alienware 25 AW2521HF Gaming Monitor which also brings a 240Hz refresh rate to the table below $300. It’s also not hard to go for more resolution instead with the Gigabyte G34WQC or Monoprice Dark Matter 34 also in a similar ballpark but bringing a much bigger screen and still competitively fast refresh rate.

This isn’t to say the HP Omen 25i is bad. It has some redeeming qualities. The design is simple, and the monitor sits on a stand that’s overly basic (vertical tilt only) for the price when looking at the competition, but HP did include a high-speed USB hub in the rear and cleverly made the stand double as a headphone holder. HP also built-in easy controls for navigating the monitor’s menu with a four-way joystick. But, that’s really all the credit it’s getting for the design.

The display is a plus. HP has used a decent IPS panel. It offers a strong brightness level that earns it a DisplayHDR 400 certification. And, it can run at a speedy 165Hz refresh rate with the full backing of FreeSync Premium Pro and even official Nvidia G-Sync Compatible certification for a 60-165Hz variable refresh rate.

While it’s cruising, the display does a solid job offering pleasing colors and contrast while managing to avoid any noticeable pixel overshoot issues that can come with cheaper panels running at high speeds. We don’t notice coronas or anything of the sort, even with the monitor’s response time set at its lowest setting. Really, the only shortcoming that catches our eyes is lack of deep black levels, which is something of an issue for almost any IPS panel.

HP tries to get the display to rise above its specs with a few features, like Shadow Vision to boost shadows and Edge Precision to improve sharp edges (which only made jaggies stand out more in our experience). Most interesting was the Game Remaster Mode which proposes to improve the graphics of lower-res, classic games. Playing The Binding of Isaac: Rebirth with 1080p and 720p full screen outputs, this setting makes no noticeable changes to the pixelated graphics of the game.

So, our conclusion is simply that the HP Omen 25i is fine in its own right, but HP hasn’t kept pace with the competition, which are offering even faster IPS panels or bigger VA panels (often on stands with a lot more flexibility) all for prices that makes this monitor a pass from us unless you find it heavily discounted.

You want a small, speedy monitor The HP Omen 25i offers a bright, speedy little display that would be easy to fit into compact gaming settings. The stand isn’t very flexible, but it keeps the monitor low down.

You find it on saleThe HP Omen 25i may struggle to compete when it’s at full price, but if you can find it at a considerable discount, it’s performance and visual quality won’t be holding it back.

You want to be the fastest165Hz is fast, but it’s not the fastest. You can find 240Hz monitors in the same price range, and you won’t be making other major sacrifices to get those speeds.

You want the most for your moneyWithout paying much more, you can find monitors that are offering bigger displays, higher-resolution panels, faster refresh rates, and more versatile stands. There’s simply better value out there.

You’re not concerned about speedIf you actually don’t expect to be playing games in 1080p at high refresh rates, you can skip this display’s 165Hz and opt for a cheaper model. 1080p 60Hz monitors can be found for well under $200.