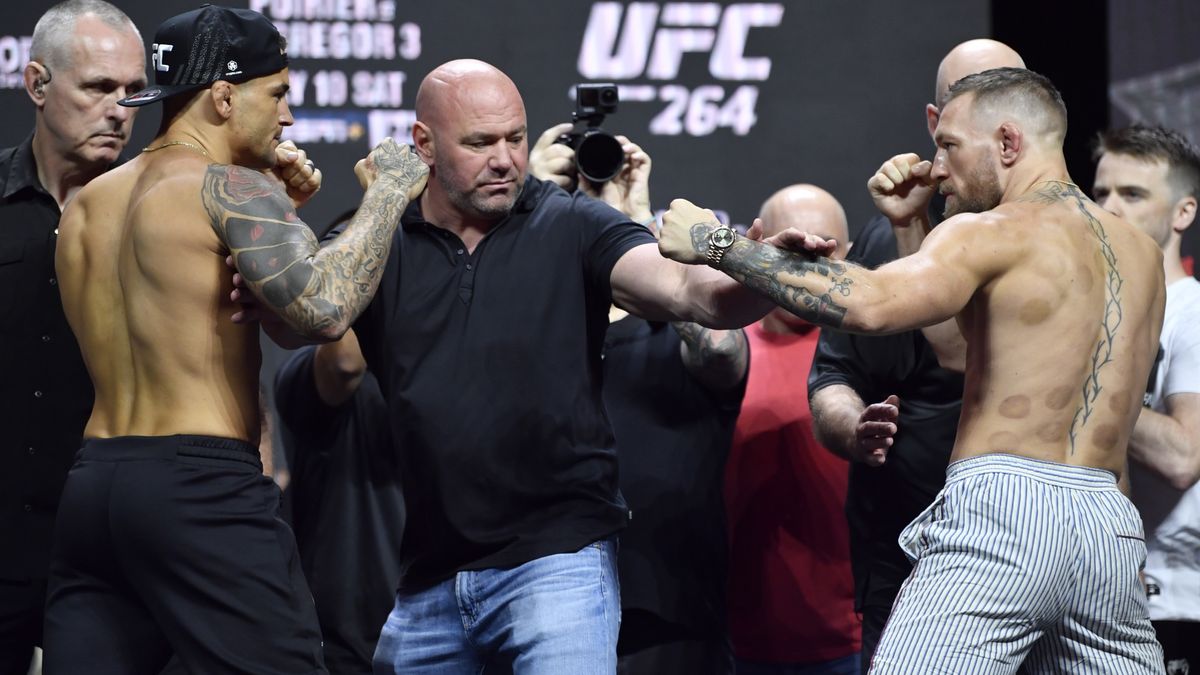 Conor McGregor returns to the UFC Octagon today for the third and final part of his epic trilogy of fights with Dustin Poirier – and it’s all happening, of course, in Las Vegas. Here’s our guide for you to discover how to find a UFC live stream and watch Poirier vs McGregor 3 online – plus details of the UFC 264 time and card with ESPN+ having exclusive coverage in the US.

The pair first locked horns at UFC 178 back in 2014, with infamous Irish star McGregor walking away victorious with a TKO in under two minutes.

After a seven-year gap, the pair met once more at UFC 257 back in January, with Poirier this time turning out the victor. That leaves the pair tied at one win each going into this blockbuster deciding bout.

That’s the main event, but the card’s notional co-main event sees a welterweight head-to-head between Stephen “Wonderboy” Thompson faces #2 ranked Gilbert Burns. Both are looking to be considered for a title shot, so expect no ground to be given in The Octagon.

When is Poirier vs McGregor 3? UFC 264 date and time

UFC 264 live stream: how to watch Poirier vs McGregor 3 in the US

See UFC 264 exclusively on ESPN+ PPVThe exclusive rights for US coverage is with ESPN Plus UFC, meaning it is the one place to watch it. Early prelim coverage starts at 6pm ET / 3pm PT, followed by the main card at 10pm ET / 7pm PT, with Poirier and McGregor expected to enter the Octagon some time from 12am ET / 9pm PT – depending on the pace of the other fights.

There are three options on cost, which depend on whether or not you already subscribe to the service.

If you already enjoy the fruits of ESPN Plus, then it’s very straight forward. It’s a classic pay-per-view scenario, and you’ll need to spend $69.99 to watch UFC 264.

If you don’t yet subscribe to ESPN Plus, then you can take advantage of this great value offer. You’ll need to go for the UFC Bundle, costing you $89.98. That gets you both the UFC 264 PPV and a year-long subscription to ESPN+ that would normally cost $60 alone!

Your final option is to buy access to UFC 264 for $83.98 and, with it, get one month of access to the Disney Plus Bundle. So that’s a jam-packed 30 days of everything on Disney Plus – think all of Marvel, Pixar, The Simpsons, Star Wars and stacks more – the full catalog of live sports and documentaries on ESPN+, AND the hundreds of box sets and films on Hulu.View Deal

How to live stream UFC 264 without PPV in Europe

As we say, you’re kind of stuck if you’re in the US. It’s PPV or bust.

Not so in Europe – probably because it’s on during the middle of the night! Instead, it’s sports streaming specialist DAZN that has the rights.

So if you’re a UFC fan in any of Austria, Italy, Germany or Spain, then get yourself over to the DAZN website.

Even better news…you can actually watch absolutely FREE in certain regions (we can confirm that is the case in Germany, Austria and Spain, for example). That’s thanks to a 30-day free trial, that you can take advantage of if you’ve never had a subscription before.View Deal

How to watch Poirier vs McGregor 3: live stream UFC 264 in the UK

BT Sport has exclusive broadcast rights to UFC events in the UK and Ireland right now, but unlike most UFC cards on the network, this blockbuster bill is a pay-per-view affair.

The PPV will set you back £19.95 and you’ll need to tune into BT Sport Box Office for all the action from Vegas, with coverage beginning on the channel with their build-up preview show at 12.30am on Saturday night followed by coverage of the prelims at 1am ahead of the main show at 3am in the early hours of Sunday morning. Poirier and McGregor are expected to enter the Octagon after 5am.

The broadcaster’s coverage of UFC is also available via the BT Sport app and on its website, so you can live stream UFC on most devices these days – and don’t forget that you can now get BT Sport without a massive commitment thanks to a BT Sport Monthly Pass.

There are a host of pay-per-view providers offering a Poirier vs McGregor 3 live stream in Canada this month.

You can head to the likes of Shaw, Bell, Rogers, SaskTel, Videotron, Telus or Eastlink with pricing at CAD$64.99. It’s also available on the UFC Fight Pass PPV.

UFC 264 live stream: how to watch Poirier vs McGregor 3 online in Australia

You’ll find UFC 264 and Poirier vs McGregor 3 available on PPV in Australia, with the main provider being Foxtel Main Event and will set you back AUD$54.95.

The main card is set to take place at 12pm AEST on Sunday, July 11 which means you won’t have to get up early to catch the main event.

Poirier and McGregor are expected to make their way toward the Octagon around 1.30 pm AEST.

You can also catch all the prelims and the main card using UFC Fight Pass .

Poirier vs McGregor 3 live stream: how to watch UFC 264 in New Zealand

Sky Arena is offering New Zealand viewers a Poirier vs McGregor live stream – with the PPV priced at NZ$39.95 for all the main card action.

You’ll want to make sure you’re watching from at least the 2pm NZST main card start time on Sunday, July 11 to get all the action.

The headline Poirier vs McGregor 3 fight is expected any time from 3.30pm NZDT, depending on how the rest of the card plays out.

Poirier vs McGregor 3 preview and predictions

The legacy of both fighters is at stake here in this third and one presumes final fight between the two, with many pundits tipping it to be the best fight of the trilogy. With both fighters having been beaten by Khabib Nurmagomedov in the past, neither fighter will want to have a deciding defeat in this trilogy bout as another black mark on their record.

While Poirier undoubtedly has the lesser profile of the two fighters, the Louisiana-born star is nevertheless ranked as the no.1 contender in the Lightweight division and boasts a 27-6 record. McGregor, meanwhile sits at no.6 in the rankings with a 22-5 record, and, perhaps significantly, hasn’t won inside the octagon since January last year.

With the stakes high in a potentially career defining fight, we expect a cagey start resulting in a fight that’s likely to go three rounds. This could in turn suit Poirier, who has regularly marked himself out as one of the UFC’s most resilient performers.

Who is Conor McGregor?

While his career began in 2008, and took to the UFC in 2013, the Irish fighter has fought in some of MMA’s biggest fights and is one of the most formidable opponents on the roster.

Who is Dustin Poirier?

Boasting an impressive 20 / 27 wins by knockout or submission. Poirier remains a force to be reckoned with, with his raw power set to once again provide a contrast to McGregor’s famed hard and fast approach to fights.

The last meeting between these two fighters back in January marked both fighters last appearances in the Octagon.

That fight saw McGregor left stunned on his return from retirement at Abu Dhabi’s Fight Island.

While Notorious edged the first round, a flurry of punches saw Poirier seal a famous TKO knockout deep into round two.

The Poirier vs McGregor 3 fight tops a stacked UFC 264 bill that also sees a highly-anticipated welterweight clash between title contenders Gilbert Burns and Stephen Thompson act as the co-main event.

Burns will be looking to bounce back following the heartache of a title fight defeat to UFC 170-pound champ Kamaru Usman at UFC 258 earlier this year. The loss ended  a six-fight win streak for “Durinho” and upended his rapid rise in the welterweight division. This match-up is by no means an easing back into the groove for Burns, with Thompson’s seemingly umatchable striking skills likely to cause him serious trouble.