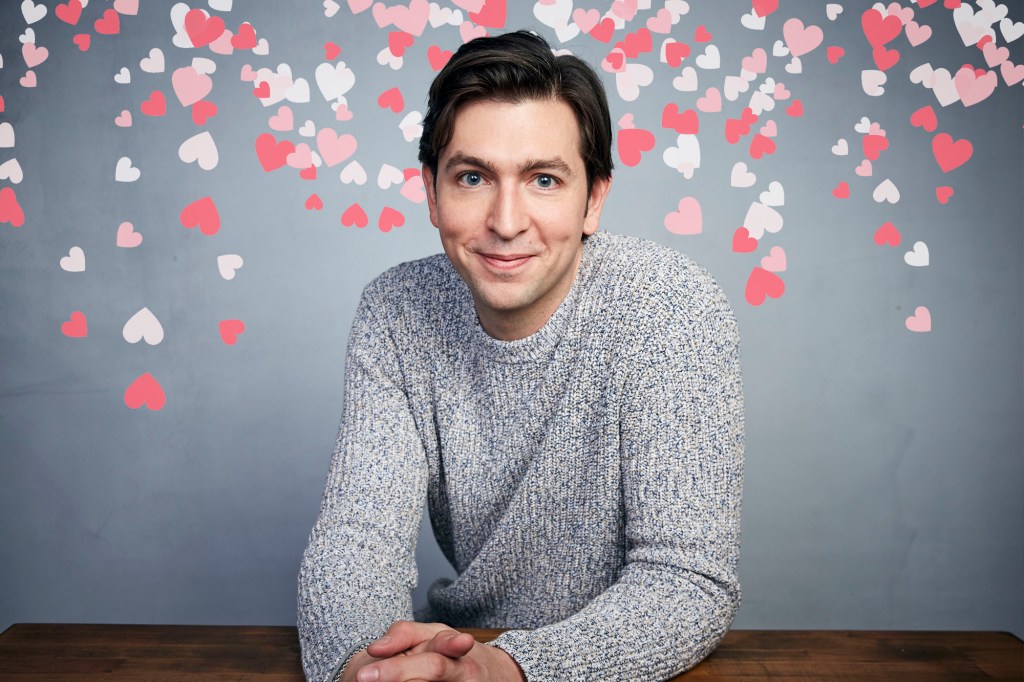 It’s Friday night at Ray’s, a Chrystie Street bar on the Lower East Side. The temperature has dropped below 60, but that’s not stopping the throngs of 20somethings — many sporting claw clips and mini skirts — waiting in a 30-minute line at the door. They’re on a mission.

Since its July 2021 opening, Ray’s has become a watering hole for Instagram’s favorite Hollywood stars: You might run into Gigi Hadid, Kiernan Shipka,  Channing Tatum, Zoe Kravitz, Shawn Mendes, B.J. Novak or A$AP Rocky on any given Tuesday.

But those A-listers aren’t the draw for Friday’s crowd. From behind their trendy, found-it-on-TikTok curtain bangs, these young women scan their surroundings for one of the joint’s celebrity owners. “I know he comes here a lot. I’m hoping to eventually see him,” one said.

She wasn’t talking about Justin Theroux, aka Jennifer Aniston’s ex-husband. Instead, she’s on the prowl for Nicholas Braun —  the inimitably awkward Cousin Greg from HBO’s “Succession.” “The reason I first went to Ray’s was, honestly, Nicholas Braun-motivated,” the woman admits.

Standing at a gangly six-foot-seven and prone to wearing Crocs (sometimes even with socks), Braun may be Hollywood’s perpetual supporting character, but he’s the leading man of New York City nightlife.

Just ask the 1.1 million Instagram followers of celebrity-sighting account DeuxMoi, who track and submit Braun’s every move in the city, validated by sneaky iPhone photos.A typical comment: “He asked me for sugar and I could barely respond.”

Braun has been spotted eating at restaurants like Fanelli’s, The Odeon, The Smile and Cafe Mogador — often with one fetching young woman or another — and partying at bars like Kingston Hall, where a DeuxMoi contributor reported that he was on a date with two brunettes “making out with one another.”

Sometimes fans simply write in that he’s just strolling around Washington Square Park or “at [a] meatball-eating contest in Little Italy.” But the most likely place thirsty women can track him down is Ray’s, where Braun, who declined a Post interview, often helps out behind the bar when it’s busy.

Women who love him from afar, women who matched with him on the celebrity-fave dating app Raya, women who slid into his social-media DMs, women who have dated and even slept with him — they all seem to share the same sentiment: Braun is a regular dude. And that’s the appeal.

“He’s not a certified hottie or anything — he’s not a person who would normally be attractive to the general public,” said Lauren Silverman, a neighbor of Braun’s who admits to being in lust with him. “He’s relatable. If you met him on the street, he would probably be nice … He’s not totally untouchable.”

One woman, who asked to remain anonymous because her relationship with Braun is still “semi-sexual,” said she landed the actor’s attention by DM’ing him on Instagram. She got a response about five hours later and, after a few lines of flirty banter, they planned their first date.

“It was actually really wholesome — it was during the day, and we just grabbed lunch,” she said. “He’s very sweet and somewhat introverted. I realized he’s not that different from his characters … they usually tend to be a little awkward, disorganized. He greeted me enthusiastically, and gave me a really big hug when we met.”

Another New Yorker who has been casually involved with Braun marveled at his ability to multitask. They also met on Instagram, and she was amazed by his attentiveness: “He was asking me about my time at home [visiting family]. I know this man is a player, so it’s impressive that he can keep up with all these girls and their stories.”

“I told him I’d just gotten the vaccine. We’d both gotten Pfizer, so I was like, ‘Pfizer should make merch.’ He sends me a screenshot of a Pfizer jacket on eBay, and then he puts a bid on it. Then I put a bid on it, and we just go back and forth, back and forth, until, eventually, it’s, like, $300,” the New Yorker recalled. “At the last second, I pull out, because I don’t have f–king $300 to spend. Turns out, he had secretly put a bid on another one, so he ended up with two of them. It’s one of the funnier things I’ve done while dating in New York.”

Braun was born and raised on Long Island. His father is an actor, too, but is better known for his design projects: He co-created the Rolling Stones’ tongue logo and worked on the band’s notorious “Sticky Fingers” album cover, with its working zipper (dreamed up by Andy Warhol). Like many aspiring New York actors before him, one of Braun’s debut television roles was “kid” in an episode of “Law & Order: Special Victims Unit”; in 2005, he got his break playing a “sidekick” in “Sky High,” a Disney movie about teenage superheroes.

As a teen, he acted during summer breaks from boarding school and worked small roles in the years following graduation, in films like “Whisky Tango Foxtrot” and “The Perks of Being a Wallflower.”

But in his latest supporting role, on “Succession,” Braun is anything but a benchwarmer. Cousin Greg “the Egg” is painfully awkward — an early scene captures him vomiting out the eyeballs of a mascot costume — but incredibly innocent, endearingly naive and indisputably layered.

The great-nephew of media titan Logan Roy, he happens into the intoxicatingly messy rivalry between his cousins, all of whom are vying to be Logan’s successor. Greg climbs the ladder, graduating from mascot suits to designer ones, and starts to show his teeth in Season 3, which premiered on HBO Oct. 17.

In interviews, Braun comes across as equally sweet and shamelessly awkward.British GQ reported an instance of Braun approaching BarStool Sports founder Dave Portnoy on the streets of New York to compliment his “One Bite Pizza Reviews.” Before Portnoy, who is a “Succession” fan, recognized him as Cousin Greg, he kind of blew Braun off: “He was being super weird, to be honest,” Portnoy later said of the interaction.

Last May, Braun posted a callout on Instagram, urging fans to help him write music for a song about love in the time of lockdown. He later released the track, entitled “Antibodies,” as well as an accompanying music video, which has been viewed more than 777,300 times on YouTube.

Proceeds from the song are donated to community organizations providing pandemic relief, and Braun reportedly scored a deal with Atlantic Records as a result.

He has also, hilariously and earnestly, addressed the throngs of women throwing themselves at him in his comments and DMs.

“There’s been a bunch of people saying they want me to hit them with my car … like, in a sexy way. Or, like, stomp on their necks with my Crocs, or, um … slap them in the face. You know, these kind of, like, violent, sexy type things,” he said in an Instagram video from September 2020. “But the car thing is really concerning, and I just wanted to say, um … I’m down.”

Still, even Silverman — the neighbor longing to date him — admitted there is one thing she’d  change about Braun: those damn Crocs. “Unless he’s gardening in his Lower East Side apartment, then that’s really functional. But otherwise … no thank you,” she said.

Like all the best stories, this one has a happy ending. The girl in line at Ray’s told The Post her trip to the bar was a success: “There’s this booth inside, to the left of the bar, where, like, friends of the bar sit. I looked over, and he was sitting there.