How an Environmental Watchdog of the Hudson River Spends Sundays 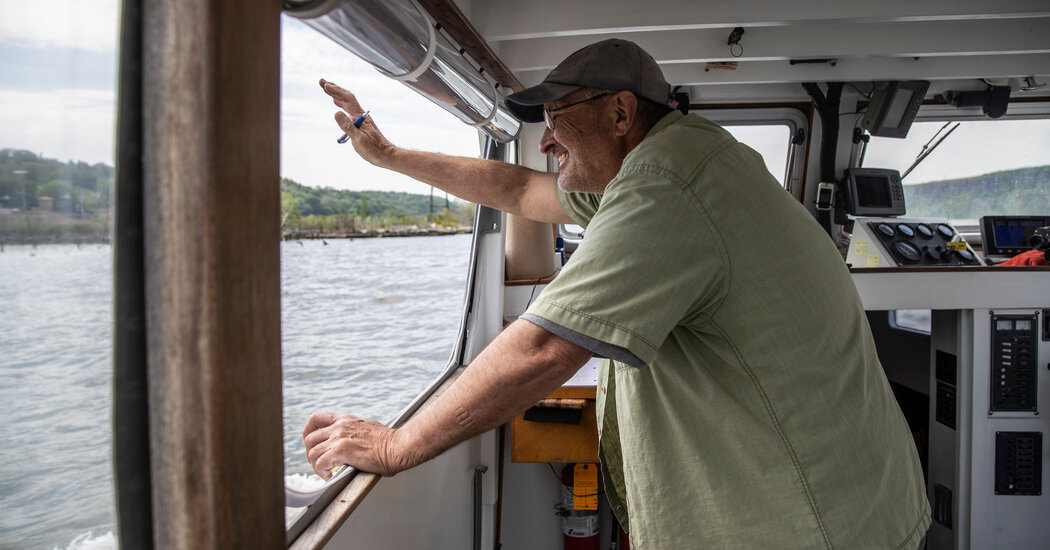 For more than two decades, John Lipscomb has been the eyes and ears of New York’s waterways. As the patrol boat captain for Riverkeeper, an environmental nonprofit, he travels approximately 5,750 miles every year. Along with First Mate Batu, a 3-year-old yellow Lab, the duo polices the entire Hudson River, from New York Harbor to north of Troy. They also monitor the Gowanus Canal and Newtown Creek, two highly polluted bodies of water in Brooklyn undergoing federal cleanups.

On Sundays, Mr. Lipscomb, 67, spends most of his time aboard the R. Ian Fletcher, a 36-foot wooden vessel resembling a lobster boat. When he’s not on the water, he lives in Tarrytown, N.Y., in his childhood home.

GRAB AND GO If I’m leaving at 9, I’m getting up at 6. I often have coffee. I hate to admit it, but sometimes I have a Monster drink because I want to wake up, but I don’t want to deal with coffee. I don’t cook anything. I’ll have some cereal or bread, or I grab something and eat in the truck. I’ll feed Batu at home, otherwise he’ll boycott. It takes me an hour to get out of the house and an hour to get to the yard.

A FLOATING PICKUP When I get to the boat, I’m loading the dog food, my food, my computer. I check the boat out, meaning oil, water, lights and maps. The boat is a Chesapeake Bay Deadrise. She’s a simple work boat, a floating pickup truck, really. Once everything is loaded, I check all of the systems before I leave the dock.

DOWN THE HUDSON I have about a four-hour run to Newtown Creek. The reason it’s four hours and not a one-and-a-quarter-hour run is because we don’t go out deep. There’s no point for an environmental patrol boat to get out in the deep channel and then just open the throttle up. The problem with that is you’re not seeing the shoreline.

FOR THE BIRDS There’s a navigation marker within a mile or so of our slip where there’s an osprey nest. An osprey is like a flying leopard. Sometimes you’re lucky enough to see them fishing. Once they lay eggs, there’s always one adult that stays with the eggs. Sometimes we see bald eagles trying to shake them down and steal their catch, so that’s a nice little moment.

BRIDGES TO THE CITY We go under the new Tappan Zee Bridge early on, and then we get down to the Spuyten Duyvil Bridge, which is an Amtrak bridge at the north end of Manhattan. We call the bridge operator on the radio and request an opening, which is cool. They swing that bridge, and then you’re in the Harlem River. It’s narrow, so you can run right down the middle, and you can see both shores, and both shores can see you. We’re running at about 6½ knots, which we’ll call 7 miles per hour. It’s very fuel-efficient. It’s also slow enough where I don’t have to look ahead of me every second. I can keep my eyes moving.

SUCCESS STORY We’ll get down to the mouth of Newtown Creek around 1. At that point, I’ll take Blondie here off to take a leak. Newtown Creek is a waterway where we’ve had lots of enforcement over time, so I’m looking at old sites and new sites. We run about three miles up and back. Newtown Creek is a real success story. It’s not done, of course. All of the legacy contamination has to be cleaned up. It’s a Superfund site, and even if the last drop of oil is cleaned up, the last heavy metal is cleaned up, the bottom sediments are dredged and replaced with clean sediment, the city still uses it as a sewer, so we’re a long way from fixing Newtown Creek. But you’ve got to try to find some satisfaction in the successes you have as you work on the next challenge.

ENTERING OZ I’ll head down the East River. It’s a roaring tidal strait so you have to pay close attention to traffic, and then the river becomes this unbelievable hallway between Brooklyn and Lower Manhattan. It’s like Oz. It’s these enormous buildings built right on the edge of the water towering above you in a boat, and these giant bridges and ships and ferries running up and down. It’s incredible to see the city from sea level.

MARINE MANNERS I’m listening all the time to Channel 13, which is called bridge-to-bridge communications. Since it’s a marine radio, you’re not talking about the Manhattan Bridge talking to the Brooklyn Bridge; you’re talking about the bridge of a ship talking to the bridge of another ship. There’s this constant communication, but the thing I find most fascinating is that it’s incredibly civil, and the courtesy one vessel affords another is wonderful to hear. Someone will say, ‘I’m going in,’ and another one will say, ‘Do you need me to hold back?’ Imagine one motorist in Lower Manhattan saying to someone else, ‘Would you like to go ahead of me? Would you like that parking spot? No problem. Have a great day.’ That’s the tone, but these are monstrous vessels operating in a congested harbor with very strong currents, which makes it tough, and a mistake is not a call to State Farm, a mistake is a career.

BAY BOUND I then go through Buttermilk Channel between Governors Island and Brooklyn, and I duck into Gowanus Bay. It’s an incredibly visual spot because on the north side as you enter there are old grain silos and an old cement ship. I used to be able to spend the night at the New York Water Taxi docks in the Erie Basin. That was great because I could walk right up to Fairway. I used to get some fancy cheese, olives and bread, and I would eat like Napoleon, but it’s changed hands. I like the possibility of a dock in Gowanus Bay because I like to take out our really small boat, a 12-foot aluminum boat, which I have on the stern of the big boat. In the past, I spent a lot of time in the Gowanus Canal with that little boat, but the dock that we used in the canal collapsed.

BED IN A BOX We’ll get to the Moonbeam Gateway Marina in Jamaica Bay around 6. I’ll get my poor, long-suffering Batu off the dock. We’ll go back to the boat, and I’ll feed him his dinner. I’ll rustle up whatever kind of ridiculous food I brought for myself. I have a microwave. I will have maybe bought some panini or soup if it’s not too hot. It’s camp food, basically. As soon as the light starts to fade around 8, I’m ready to lie down. I have this really old ratty sleeping bag and inside of the boat, there’s this big box. I rig it up with my bunk mattress, Batu’s bed and my sleeping bag, and I climb in and he climbs in, and we snuggle and sleep. It’s an exciting life. If someone said to me, ‘I’m going to take you to a motel and pay for your room,’ I wouldn’t go. Not a chance. The day I have to get off that boat is going to be a sad day.