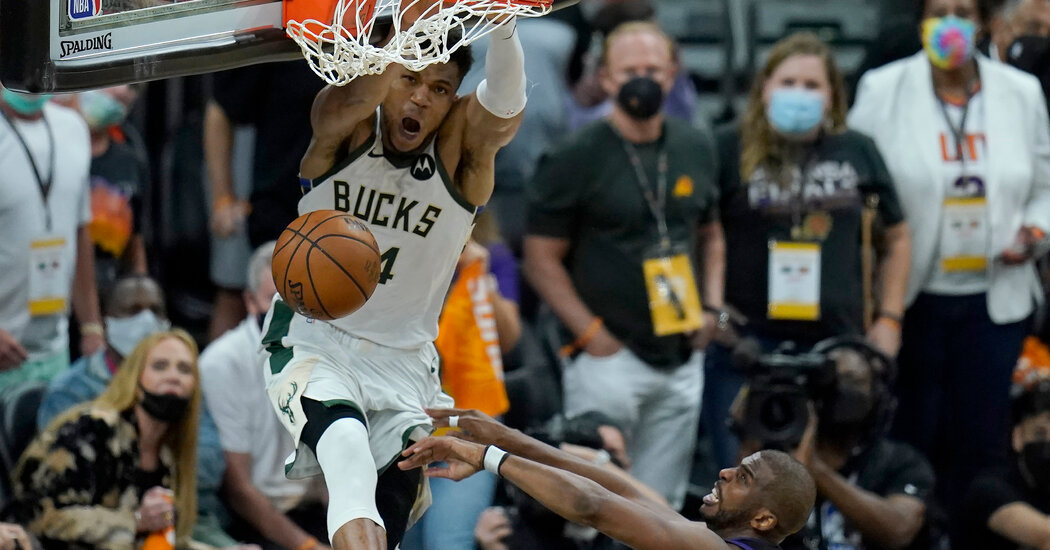 PHOENIX — In the most consequential sequence of his basketball career, Jrue Holiday threw both caution and the basketball to the wind.

The Milwaukee Bucks held a 1-point lead with about 21 seconds remaining in Game 5 of the N.B.A. finals when the Phoenix Suns’ Devin Booker drove into the paint. Holiday, recognizing Booker was hunting for his sweet spot to shoot, sagged off Chris Paul and into Booker’s blindside. When Booker turned into him, Holiday ripped the ball from his grasp and raced upcourt.

Improbably, Holiday then lofted the ball high toward the rim rather than calmly trying to run out the clock, a risky proposition that could have resulted in more than one bad outcome, such as allowing the Suns a late lead on Saturday night, control of the series moving forward and years of second-guessing.

But the Bucks’ Giannis Antetokounmpo had spotted himself alone in the open court and motioned, more than once, for the pass. Holiday obliged, discarding the moment for the momentum. Antetokounmpo skied and forcefully finished the alley-oop with 13.5 seconds left as Paul helplessly fouled him.

“I mean, they don’t call him the Freak for nothing,” Holiday said. “I threw it as high as I could.”

A game after notching one of the most athletic and inconceivable blocks in N.B.A. finals history when he denied Deandre Ayton near the rim, Antetokounmpo orchestrated an alley-oop when the stakes could not have been higher.

The Bucks relied on Holiday’s funneled fury, Khris Middleton’s timely shot making and Antetokounmpo — always Antetokounmpo — in stiff-arming Phoenix’s frantic comeback bid with a 123-119 win to claim a 3-2 edge in this best-of-seven series.

The finals return to Milwaukee for Game 6 on Tuesday night, when the Bucks can clinch the franchise’s first championship in half a century.

“Obviously, we know what the deal is,” Antetokounmpo said. “It’s one game away from being an N.B.A. champ, being in the history of this game, being always there. You know, nobody can take that away from you. Doing it in front of our families and our fans, it’s big. It’s going to be big. That can wait. We’ve got to focus and keep playing good basketball.”

Milwaukee seized momentum of the finals after opening the series with consecutive losses, a deficit only four teams in N.B.A. history have overcome.

The Suns and the Bucks successfully defended their home court in the first four games of the series, a pattern that seemed ready to continue early in Game 5.

As Antetokounmpo rested, Holiday and Pat Connaughton’s scoring off the bench righted Milwaukee in the second quarter.

Phoenix is turning increasingly reliant on the production of Booker, a dynamic and versatile scorer, down to the predictable crucial play that led to Antetokounmpo’s finish. The early rhythms developed by rotation players like Jae Crowder and Mikal Bridges disappear when their offense turns Booker-centric.

For a second straight game, Booker scored at least 40 points in a finals game in which Phoenix fell just short.

“We got to move it around,” Suns Coach Monty Williams said. “We know what Book can do with the ball, but the one thing we talked about was getting to the paint, finding guys on the back side. We feel like that’s a formula. There were some times tonight where it just stuck a little bit, and against their defense, they don’t have to work against that.”

Paul, who was uncharacteristically careless with the ball in Game 4, finished with 21 points, 11 assists and a single turnover in Game 5.

“We knew this wasn’t going to be easy,” said Paul, vying for his first championship in 16 N.B.A. seasons. “We didn’t expect it to be. It’s hard. Coach said it all year long: Everything we want is on the other side of hard, and it don’t get no harder than this.”

Phoenix maintained hope after the alley-oop. Antetokounmpo, a shaky free-throw shooter throughout this postseason, missed his attempt with 13.5 seconds remaining. He volleyed the rebound to Middleton, who was fouled and secured the outcome with his own free throw.

“That was a horrible miss,” Ayton said of his team’s failure to get the rebound. “It was just an athletic play. He tipped it behind him knowing that his teammates are there. It was a bad miss.”

Antetokounmpo delayed his postgame media session with reporters while dealing with cramps. He continued his sensational finals output with 32 points and 9 rebounds. Middleton, who went bucket for bucket with Booker during stretches of the second half, had 29 points. Holiday added 27 points and 13 assists.

The Bucks had fallen disappointingly short in previous postseasons. They acquired Holiday, a ball-hawking defender and respected point guard, with a destination like these N.B.A. finals in mind.

His persistent, full-court harassment of Paul and Booker began paying dividends before his shot did.

“One of the things we talk about all the time in the locker room is aggressive Jrue,” Middleton said. “When he’s aggressive, he’s one of the tougher point guards to handle — his size, his athleticism, his skill set. He can do so many things on the court when he’s aggressive and getting to the paint, hitting shots like we saw tonight and finding guys. He’s a balanced player and really skilled player that we’re lucky to have.”

Holiday offered a preview of his late-game dramatics in the third quarter. He picked Booker’s pocket and found himself alone, just beyond the 3-point line.

He drained a 3-point shot without hesitation instead of waiting for his teammates.

“I went 4 for 20 the game before and we still won, and I know I can do other things to affect the game,” Holiday said. “I know when my shot is going and I’m trying to make plays for others, it is definitely an added bonus.”

Before Game 5, the N.B.A. had managed to avoid coronavirus-protocol-related absences as cases continue to creep up across the country.

“Just because I know him a little better, he’s probably screaming in front of the TV, and probably in the last possession, he probably took his shirt off and started playing defense, sweating, jumping on the bed,” Giannis Antetokounmpo said after the game.