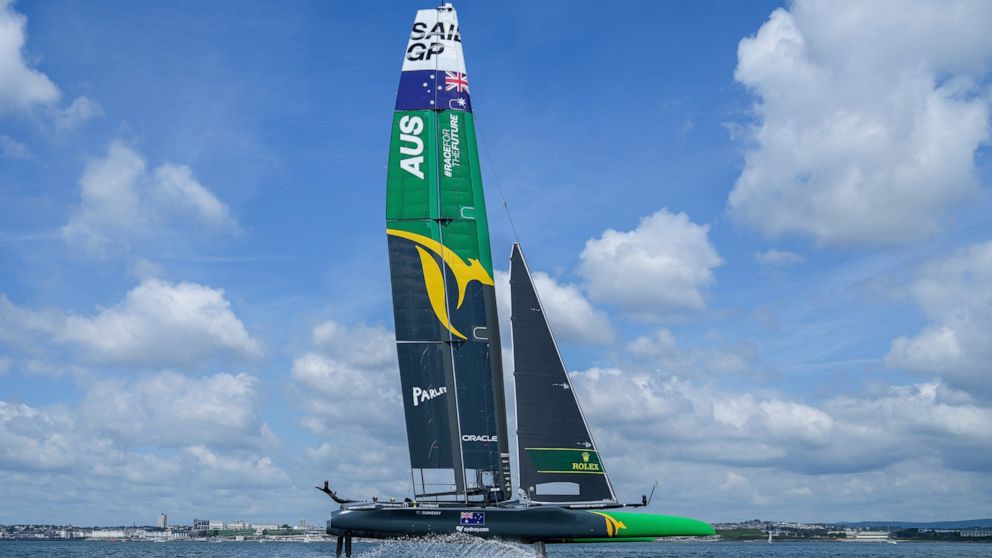 The SailGP global road show touches down in Old Blighty this weekend, giving Britain’s Paul Goodison the opportunity to race in front of home crowds for the first time since the 2012 London Olympics.

The regatta on Plymouth Sound will also give Australia’s Tom Slingsby the chance to bounce back from a last-place performance in the previous regatta, an unthinkable finish for the crack sailing team that claimed the $1 million, winner-take-all inaugural SailGP championship in 2019.

Goodison will once again fill in as helmsman of the Great Britain SailGP Team in place of Sir Ben Ainslie, who has long-standing personal commitments. With Goodison steering the foiling 50-foot catamaran, the British finished sixth in the eight-boat fleet at Taranto, Italy, last month, after Ainslie steered it to victory in the season-opening regatta in Bermuda.

Goodison hopes a little more experience in the foiling 50-foot catamaran and the energy from the home crowd will help the British.

“We’re just looking forward now to taking the lessons we learned and put on a better performance here on home waters,” he said. “We’ve got a great team here and really looking forward to flying the Union Jack in front of our supporters.”

Goodison, an Olympic gold medalist and three-time world champion in the foiling Moth, made his SailGP debut at Taranto. Ainslie asked him during the America’s Cup in Auckland, New Zealand, earlier this year if he’d fill in. Goodison was mainsail trimmer for the New York Yacht Club’s American Magic, and Ainslie skippered INEOS Team UK. Both teams were eliminated in the challenger trials.

“There aren’t that many world events that happen here, so like with the America’s Cup, you’re busy in Bermuda, then you’re busy in Auckland racing,” Goodison said. “You very rarely get to race at home, so it’s going to be exciting to race in front of a big home crowd again.”

Goodison said the natural amphitheater of Plymouth Sound makes it “an incredible place for watching the races. You can sit on the shoreline or sit on the hills or he cliffs and see the whole harbor, so it should be phenomenal to watch.”

The Australians, meanwhile, had finished no lower than second place in any of the previous seven SailGP regattas, so finishing last in Italy and missing the final match race “was definitely a shock to the system,” Slingsby said.

The Aussies will once again be without flight controller Jason Waterhouse, who is preparing for the Tokyo Olympics. Kinley Fowler, who replaced Waterhouse in the last regatta, will miss this regatta to be with his expectant wife. Grinder Sam Newton is back home in Australia for family reasons.

It’s hard for sailors to get out of Australia due to COVID-19 protocols, so the team will be using three new crewmembers who’ve never sailed the F-50. Ed Powys will handle the flight controller role for the first time.

“We’re doing our best in these difficult times but unfortunately we’re not at our normal full strength,” said Slingsby, an Olympic gold medalist and former America’s Cup champion. “But we understand the circumstances and we’ve just got to try to get through these next couple of events where we’re down some of our key people and try do our best and get some good results and then really attack when we get back to full strength.”

New Zealand’s Peter Burling and Blair Tuke also will miss a second straight SailGP regatta as they prepare to defend their Olympic gold medal in the 49er class.

This will be the first regatta since SailGP announced its Impact League, a competition within the competition to reward teams for taking actions to reduce their overall carbon footprint and accelerate the inclusion of women sailors aboard the fast, 50-foot foiling catamarans.

In conjunction with the Impact league, Team Australia announced a partnership with Parley For the Oceans to help fight marine plastic pollution.

“Obviously being a sailor, my life’s on the ocean and for sure plastics in the ocean is a huge issue,” said Slingsby, who has seen pollution while racing all over the world.

“Unfortunately, I’m seeing more and more plastic and pollution in the water. We all were hoping it would be less now, but in my opinion it’s been going up,” he said.

“We get affected in the results but that doesn’t bother me in the long run. The ocean health is much more important than our results,” he said.

As part of the initiative to educate people about the importance of marine conservation, Team Australia and Parley will host Parley Talks during several forthcoming SailGP regattas, including in Sydney in December.