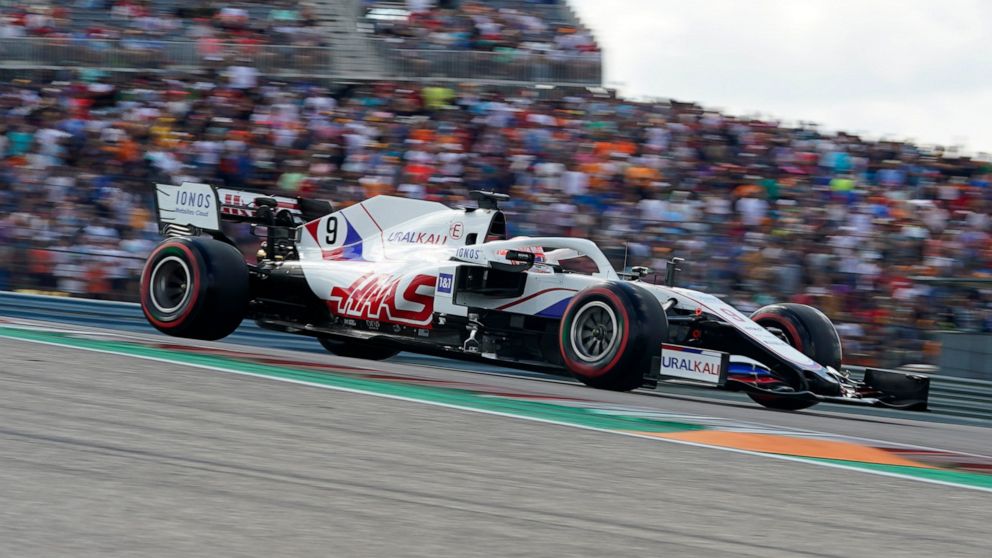 AUSTIN, Texas — As home races go, the U.S. Grand Prix was just like the rest of the season for Haas F1.

The only Formula One team owned by an American finished last again. Its two cars, driven by rookies Mick Schumacher and Nikita Mazepin, were so far off the pace that they were two laps down when Max Verstappen and Lewis Hamilton raced past them to the finish.

Yet team owner Gene Haas seemed anything but disappointed in Sunday’s results at the Circuit of the Americas, or the 2021 season as a whole.

Haas said in an interview with The Associated Press that he has saved money by not dumping cash into his cars ahead of sweeping changes in car regulations next year. Haas Automation, the personal business of the team owner, has been booming — which was the whole reason he expanded into the international series.

His CNC machine manufacturing company, headquartered in Oxnard, California, was considered one of the largest in North America when Haas was only the co-owner of the Stewart-Haas Racing NASCAR team. Now that Haas is in F1, Haas Automation has established a global footprint.

So Haas isn’t bothered that F1′s surging popularity in America hasn’t boosted his fledgling team. And don’t bother suggesting he should hire an American driver just because the team owner is from California and owns a race shop in North Carolina.

“That’s probably a very sensitive and frustrating point for me,” Haas told AP during the U.S. Grand Prix weekend. “Everybody says, ‘Well, you should have an American driver.’ But the thing I don’t understand is why there isn’t more big-time sponsorship for an American driver?

“It takes millions and millions of dollars. They need a benefactor to help an American driver race in Formula One. For all the talk about it, there’s no one that’s ever stepped up to do that.”

Haas hasn’t shown much interest in developing an American driver and this season has turned his cars over to a German and a Russian.

Schumacher comes from racing royalty and is the son of German seven-time F1 champion Michael Schumacher. Mazepin comes from Russian money; his billionaire father, Dimitri, is a major shareholder in Uralkali, the Russia-based fertilizer company that is Haas F1’s major sponsor.

The Haas cars are indeed red, white and blue — but the scheme of red, blue and white mirrors the Russian flag.

The team was mid-pack when Haas acquired the assets of the failed Marussia team and put a pair of cars on the grid in 2016. But the team has collapsed the last two years and Haas is the only team that hasn’t scored a point in 2021.

Gene Haas said he was surprised F1 raced the abbreviated 2020 season in the pandemic, and that coming car changes made it prudent to save money instead of tweaking old engines for a little bit of speed.

“You could spend $10 million to $20 million and maybe move up one position,” Haas said. “It wasn’t worth the money. We just decided we’d put all our money in the ’22 car.”

The car development for 2022 has been encouraging, he said.

”The good thing is that because it’s a whole brand new format, nobody really can copy anybody else,” he said. “All 10 teams are going to have 10 unique cars. We’ll see who lucks out.”

The current lack of speed has been matched by lack of experience behind the wheel. Mazepin — derisively referred to as “Mazespin” by fans because of his numerous on-track gaffes — and Schumacher have spent the season bumping around the back of the grid, getting in the way of the leaders and bickering amongst themselves.

Their boss doesn’t view it as a wasted season.

“Hopefully they’re taking advantage of (the season) rather than lamenting the fact that they are slow,” Haas said. “They’re getting good experience in racing Formula One, because there’s a lot to be said by just racing with these guys.”

Formula One’s return to Texas last week came as the American appetite for F1 has exploded. The race weekend drew more than 350,00 fans over three days, with 140,000 in attendance for Sunday’s race.

Yet the Haas team trailer was mostly quiet at the far end of the paddock, well away from the bustle surrounding Red Bull, Mercedes, McLaren and Ferrari. Even Williams and Alfa Romeo, its neighbors in the paddock and near the bottom of the standings, had more action.

There’s money to be made with success on the track. Fan interest in the U.S. seems to be on the rise and the Liberty Media-owned series will add a second American race next season in Miami. There are hopes of someday adding a third.

Zak Brown, the American head of McLaren, predicted last week that F1 teams could soon be worth billions, on par with NFL, NBA or Premier League Soccer clubs.

Haas Team Principal Guenther Steiner said the team has been late to capitalize on F1′s surging popularity in its home country and that it’s time to “get more involved with people from America.”

“I think we neglected that a little bit, in the beginning when we came in, because Formula One grew very quickly in the last two years,” Steiner said. “In the beginning, when we started it was a lot smaller and now it seems … why we didn’t see that coming?”

Haas, however, resists classifying Haas F1 as Formula One’s “American” team because that ignores his European staff and business efforts. And being an American team makes no difference to Haas Automation, which ultimately pays Gene Haas’ bills.

“Most of my team comes from England, Italy … Europe,” Haas said. “We’re just basically trying to run a team in the most efficient and best way we can. We’re not really worrying too much about whether it’s popular with the American public or not. That’s kind of how I look at the business side of it. It’s a great way to help us a lot with brand recognition in Europe.”