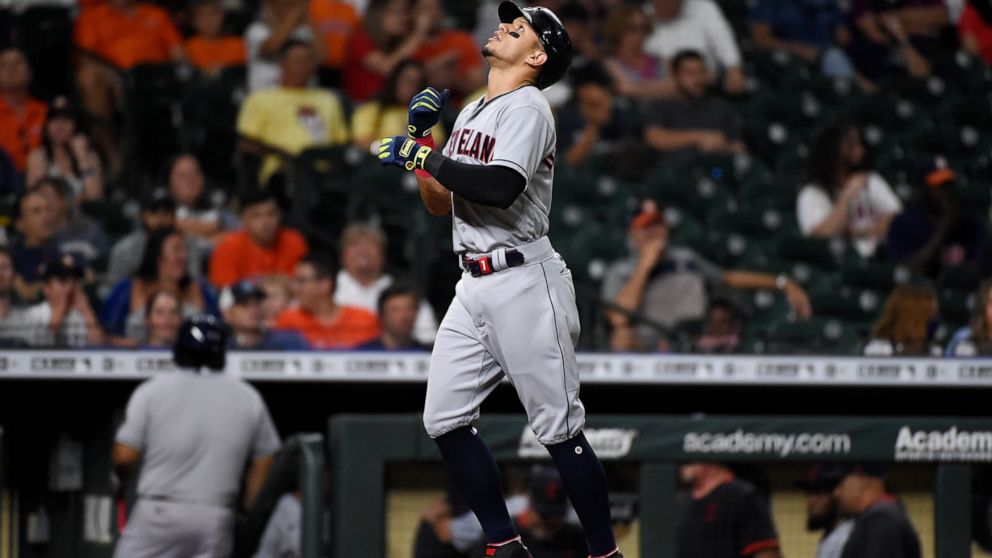 HOUSTON — Rookie Ernie Clement had a season-high three RBIs and Cesar Hernandez hit a tiebreaking home run in the seventh inning to lift the Cleveland Indians to a 5-4 win over the Houston Astros on Wednesday night to avoid a sweep.

It was 4-all with one out in the seventh when Hernandez, who earlier hit an RBI double, sent a pitch from Austin Pruitt (0-1) into the seats in right field. It was his 16th homer this season, eclipsing the career-high 15 he hit in 2018 and matched last year.

Rookie starter Eli Morgan permitted three hits and three runs in five-plus innings. Bryan Shaw (3-3) allowed two hits and a run in the sixth and James Karinchak pitched a perfect ninth for his 11th save.

Jose Altuve and Kyle Tucker both homered for the Astros for the second straight game. Houston lost to the Indians for the first time this season after winning the first six meetings.

Yu Chang singled to start the third and advanced on a sacrifice bunt by Clement. Hernandez doubled with two outs to put Cleveland up 1-0.

The Astros tied it when Altuve connected off in the fourth. Tucker sent a changeup from Morgan over the low fence in right field to put Houston on top 2-1 in the fifth inning.

Oscar Mercado’s single in the sixth loaded the bases with no outs and chased McCullers. Bryan Abreu took over and struck out the next two batters before Clement doubled to center field to clear the bases and put the Indians up 4-2.

The Astros tied it in the bottom of the inning with an RBI double from Altuve and a run-scoring single by Yuli Gurriel.

Indians: 3B José Ramírez sat out for a second straight game with elbow discomfort, but manager Terry Francona said he should return to the lineup on Thursday. … Chang was recalled from Triple-A Columbus to provide reinforcements in the infield with Ramírez out and Bobby Bradley dealing with discomfort in his lower back that made it difficult to play defense. Bradley was the team’s designated hitter on Wednesday night.

Astros: RHP Jose Urquidy (right shoulder discomfort) threw 35 pitches off flat ground on Wednesday. Manager Dusty Baker said they’ll wait to see how he feels in the coming days before deciding on his next step. … Baker said that LHP Brooks Raley (health and safety protocols) looked good in his first rehabilitation outing for Triple-A Sugar Land on Tuesday and that he could return soon.

Indians: Cal Quantrill (2-2, 4.05 ERA) will start for Cleveland in the opener of a four-game series against Tampa Bay on Thursday night. Luis Patiño (1-2, 4.87) is set to start for the Rays.

Astros: Houston is off Thursday before opening a three-game series against Texas on Friday night when Jake Odorizzi (3-5, 4.09) will oppose Rangers’ left-hander Kolby Allard (2-7, 4.06)