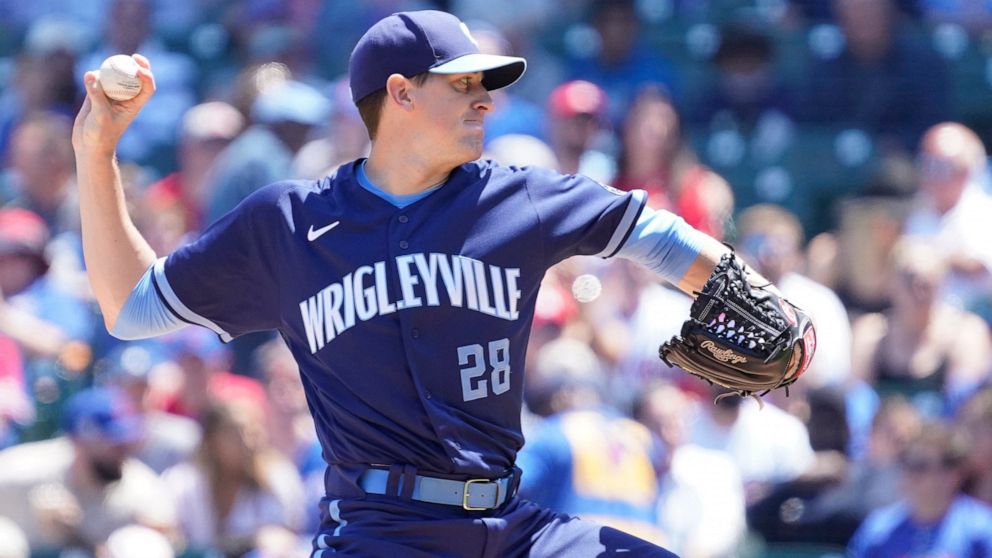 Kris Bryant drove in three runs with a pinch-hit double to start Chicago’s five-run burst in the seventh inning before Wisdom went deep against his former team.

Joc Pederson doubled twice, including a three-run hit in the first. Chicago won for the second time in three games following an 11-game losing streak.

Bryant didn’t start for a second straight game because of a strained right hamstring, but hit the first pitch he saw from Junior Fernández to the wall in left filed with the bases loaded. The All-Star came home when Wisdom connected for his 12th homer to make it 9-2.

Hendricks (11-4) allowed two runs on seven hits in 6 1/3 innings while walking one and hitting a batter.

Hendricks, one of the Cubs’ few bright spots as they’ve tumbled below .500, had won eight straight starts before no-decisions in his previous two outings.

The 31-year-old right-hander helped out in the field, too. Hendricks snared Dylan Carlson’s comeback liner to start the fifth, then jumped high off the mound rob Tyler O’Neill of a single to end the inning.

Carlson had three hits and Paul DeJong had a two-run, pinch-hit homer in the ninth for the Cardinals, who have lost four of six. Starter Wade LeBlanc (0-2) allowed three runs on five hits in three innings.

Javier Báez started at shortstop for the Cubs after missing two games with a right thumb sprain. O’Neill was in left field for the Cardinals after a right pinkie injury and a food allergy reaction limited him to two plate appearances over the past week.

The Cubs loaded the bases in the first and Pederson cleared them with two outs when Carlson slid and couldn’t hang onto a sinking liner in right field.

The Cardinals cut it to 3-2 in the third on singles by O’Neill and Yadier Molina with two outs.

Ian Happ’s pinch-hit single in the Chicago fourth made it 4-2. Jason Heyward added an RBI in the eighth.

An middle-aged fan reached well over the sidewall in Wrigley Field’s tight right-field corner and caught Paul Goldschmidt’s fly with his glove in the first inning as Heyward closed in. Goldschmidt was ruled out on fan interference despite a challenge from the Cardinals.

The Cardinals signed RHP Luis García signed to a free agent contract on Friday, then brought in the veteran 34-year-old to start fourth. García hit the first batter he faced, Willson Contreras, in the helmet with an 0-2 pitch. Contreras remained in the game behind the plate.

LHP Kyle Ryan was recalled from Triple-A Iowa and allowed three runs in the ninth. RHP Cory Abbott was optioned to the farm team.

Cubs: RHP Ryan Tepera (left calf strain) got two outs in the seventh after being activated from the 10-day IL. … LHP Brad Wieck (irregular heartbeat) was placed on the 10-day IL, retroactive to July 7.