Help! I’m Traveling to Europe. All The Required Documentation Is Dizzying 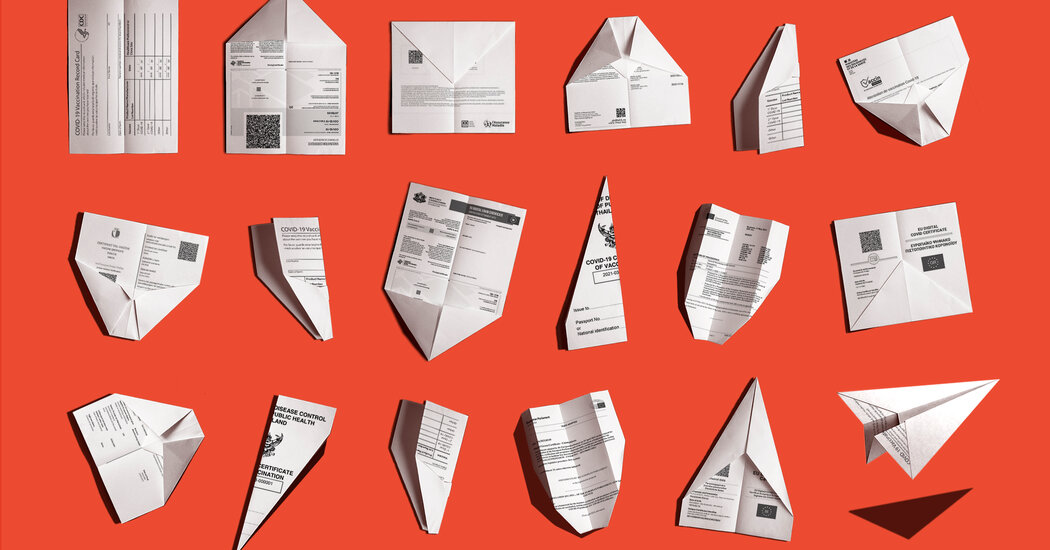 I know that vaccinated Americans are not required to quarantine when visiting France, but are they required to take a Covid test — either going there or returning home? And although I updated my Clear app to show that I have been vaccinated, I don’t know who is responsible for looking at it: Is it the airline when you check in, an officer when you go through security or someone on the ground when you land? Bob

Once upon a time, the requirements for international travel weren’t all that complicated: always a passport, sometimes a visa.

Today, to leave one country and enter another is to contend with confusing rules and restrictions that continue to change as borders reopen and travel resumes.

Americans will encounter varying health protocols while traveling abroad. France is allowing vaccinated visitors from a short list of “green” countries — which includes the United States — to enter without restrictions. Greece and Lebanon are, too. But since January, everyone traveling to the United States has been required to take a Covid test within three days of their flight. That applies to residents and visitors, vaccinated and unvaccinated, alike.

Although vaccination requirements are set by countries, not airlines, airlines are not allowing passengers to check in for international flights without first verifying whatever documents are required, including vaccination records and virus tests.

What that means logistically depends on the airline — and sometimes the airport. Passengers on Delta Air Lines flights, for example, will have their documents verified in-person by a check-in agent and again by a gate agent before boarding. United Airlines passengers are cleared for check-in after the necessary documents are verified in person or online at United’s Travel-Ready Center, an online hub that tells confirmed ticket-holders what’s required, based on their destination. (The digital option allows carry-on die-hards to get a boarding pass without an in-person check at the airport.)

Depending on a multitude of factors, including where you’re going and how airports are set up, you should also expect to produce proof of vaccination at other touch points along the “getting there” part of the trip, including at customs and immigration after landing.

There are a bunch of new digital health pass initiatives that verify and store vaccination records and test results, including one from Clear, the biometrics company. Digital passes provide another layer of safeguard and allow you to easily show proof of vaccination when asked, whether it’s by a check-in agent at an airport or a host at a restaurant where indoor dining is reserved for vaccinated patrons. But because digital passes are nonstandardized at this point, and are accepted at a venue’s discretion, it’s important to always have your physical card when traveling, as well. Treat it like a passport or driver’s license; as in, something you would never leave home without and something you’re asked to routinely pull out on command while traveling.

In addition to vaccination records and test results, many international destinations are also requiring that health declaration forms be filled out before arrival. The Delta Discover Map is a handy online tool for keeping the dizzying mess of what’s required, and where, straight.

My husband and I purchased plane tickets to the U.K. and Copenhagen for late September. In the fine print of Denmark’s updated policies, “fully vaccinated” is defined as: “You must have received your final dose of vaccination at least 14 days, but no more than 180 days, before traveling.” But because my husband was vaccinated in early February, he will be outside the 180 days when we visit. What gives? Alanna

Denmark has reopened for fully vaccinated American travelers and those from several other countries. But as if to underscore the ragtag, in flux nature of the nitty-gritty of travel in the Covid era, the rules have evolved further in the few weeks since. To boot: When I emailed Visit Denmark, the country’s tourism organization, a spokeswoman directed me to the press office for the Danish Health Authority, where a spokesman steered me to the Ministry of Foreign Affairs, where a spokeswoman sent me to the Ministry of Justice.

A few days later, a spokesman from the Danish Ministry of Health emailed with news: As of July 2, vaccinations are now “valid” for 12 months.

Long story short: Wherever their desired destination, travelers should expect country-by-country requirements to shift, so it’s important to continue to check for updates and book tickets that can be changed or canceled without penalty.

This winter, while living in Barbados, I received two properly spaced doses of Covishield, the version of the AstraZeneca vaccine that was manufactured in India, as well as a temporary vaccination certificate that includes my United States passport number and other essential information. I’m planning a trip to Germany and Italy in September, and I’m wondering if the European Union will recognize my Barbados vaccination certificate. Tom

The Barbadian Ministry of Health and Wellness is in the process of issuing electronic certificates to everyone who’s been vaccinated in the country, including those who initially received temporary certificates. The new certificates will feature a barcode and security seal, and can be requested by phone or email.

Although Covishield was approved for emergency use by the World Health Organization in February, it has not yet been formally authorized by the European Medicines Agency, the branch of the European Union that oversees the scientific evaluation of medicines and vaccines. By contrast, vaccines manufactured by Pfizer, Moderna and Johnson & Johnson, plus the version of the AstraZeneca vaccine that was manufactured in Europe, have all been authorized by the E.M.A. Those are also the four that have been approved by the European Commission for the EU Digital COVID Certificate, which is designed to ease travel within Europe.

In considering who’s allowed to enter for nonessential travel, some European countries are still taking their cues directly from that list. But because individual countries can also choose whether or not to accept other vaccinations as proof of immunity, Germany, Iceland, Belgium and a growing list of others, including France, are now accepting Covishield. Italy isn’t yet, but travelers coming from elsewhere in Europe can also take a virus test to enter, even if they don’t possess the needed proof of vaccination.

In an email, a spokeswoman from the E.M.A. said the agency “has not received a marketing authorization application for Covishield. Should there be any change we would communicate about it.”

“The decision on entry in the E.U. is a Member State competence,” a European Commission spokesman said in an email. “However, in order to ensure a coordinated approach across the E.U., the Commission is discussing these vaccines — those that correspond to E.M.A. authorized vaccines, and vaccines listed by the W.H.O. — with the Member States in the Health Security Committee.”

In short, keep a close eye on Italy and other E.U. countries, because they may add Covishield to their lists of vaccines that prove immunity and exempt travelers from testing and quarantine.

How to Prepare as the Fed Moves to Rein In Inflation