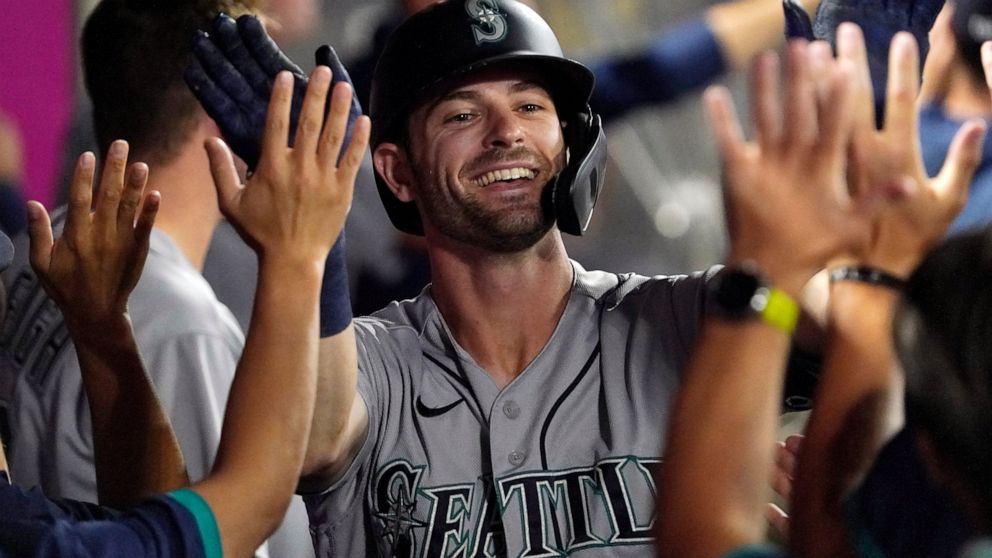 ANAHEIM, Calif. — Mitch Haniger didn’t take much time off during the All-Star break.

Instead of resting to prepare for the second half of the season, the Seattle outfielder worked on his swing. After one game it appears the adjustments are working.

Haniger had three hits and Chris Flexen continued his mastery of the Angels as the Seattle Mariners held off Los Angeles 6-5 on Friday night.

Haniger said he worked on having better hand-hip coordination and allowing better separation between his hips. His two-run homer in the fourth inning helped extend Seattle’s lead to 4-1.

“I feel excited for the second half of the season so that we can finish strong,” said Haniger, who finished a triple shy of the cycle and is 9 for 20 in his last five games.

Angels second baseman David Fletcher got two hits and extended his hitting streak to 25 games, tied with Rod Carew for the second-longest in franchise history.

Despite Flexen’s strong showing, Seattle’s bullpen nearly blew it. The Mariners held a 6-2 advantage going into the ninth inning before the Angels took advantage of a pair of errors, scoring three times to close within a run.

With runners at the corners and two outs, Paul Sewald got Phil Gosselin to line out to right field to preserve the win.

“The ninth inning was not really indicative of how we’ve played. We didn’t make plays behind him,” manager Scott Servais said. “It’s a tough spot for Sewald to come in but he got the job done.”

Kyle Seager also went deep for the Mariners, who have won four of five.

Flexen (9-3) went seven innings and allowed only one run on six hits with two strikeouts. In his last start against the Angels on July 10, he threw seven shutout innings.

Sewald earned his third save after Kendall Graveman gave up three hits and three unearned runs in two-thirds of an inning.

Flexen is 4-0 in his past six starts and has permitted one run or fewer in all but one. The right-hander threw only 79 pitches and got a lot of contact early in counts, but Servais decided to turn to the bullpen because Flexen had already gone through the order three times.

“It was a highly efficient outing. That’s where we want to be. I was able to make pitches when I needed them to make contact,” Flexen said.

Max Stassi hit his seventh home run of the season for the Angels.

The game was tied at 1 in the third before Seattle broke it open with three runs. Haniger lined a one-out double to the left field corner and scored on Ty France’s RBI single. Seager then gave the Mariners a 4-1 advantage when he drove a fastball from Andrew Heaney (5-7) to right for his 17th homer.

“He didn’t have his best stuff. From the beginning he didn’t have that normal jump or carry on the ball,” Angels manager Joe Maddon said.

Seattle added a pair in the seventh when Haniger hit a two-run shot to left-center to extend the lead to 6-1.

The Mariners got on the board in the first when Luis Torrens’ base hit drove in Haniger. The Angels evened it in the second when Stassi homered to right-center.

Los Angeles pulled to 4-2 in the eighth when Fletcher led off with a single, advanced to second on a wild pitch and scored on Jared Walsh’s base hit.

The Angels took advantage of a pair of Mariners errors in the ninth to make it interesting.

Adam Eaton began the rally with a base hit with one out and advanced to second when Dylan Moore fielded Luis Rengifo’s infield grounder but was wildly off target on the throw to shortstop J.P. Crawford. After Kean Wong struck out, Fletcher hit a line drive that went off Seager’s glove at third base to drive in Eaton. Fletcher advanced to second when Crawford wasn’t able to cleanly field the deflection.

Shohei Ohtani then lined a two-run single to bring the Angels to 6-5. Ohtani advanced to third on Walsh’s single to right-center but both were stranded when Gosselin lined out to end the game.

Eaton went 2 for 4 in his Angels debut, including a double in his first at-bat. The veteran outfielder was signed by Los Angeles on Wednesday after he was released earlier in the week by the Chicago White Sox.

Kelenic was called up in early May but was sent down last month after batting .096 in 23 games.

Mariners: 1B Evan White (strained right hip flexor) — who has been on the IL since May 14 — has elected to undergo season-ending hip surgery. Servais said the surgery is likely to take place next week. … RHP Casey Sadler (right shoulder impingement) threw a scoreless inning with a strikeout during a rehab appearance for Triple-A Tacoma. … RHP Ryan Weber was claimed off waivers from Milwaukee and will report to Tacoma. INF Wyatt Mathisen was designated for assignment to make room for Weber on the 40-man roster.

Angels: CF Mike Trout (calf strain) still does not have a timetable for when he can begin a rehab assignment because he still is not running at 100%. … 3B Anthony Rendon will miss at least another two weeks as his hamstring strain is healing slower than expected.