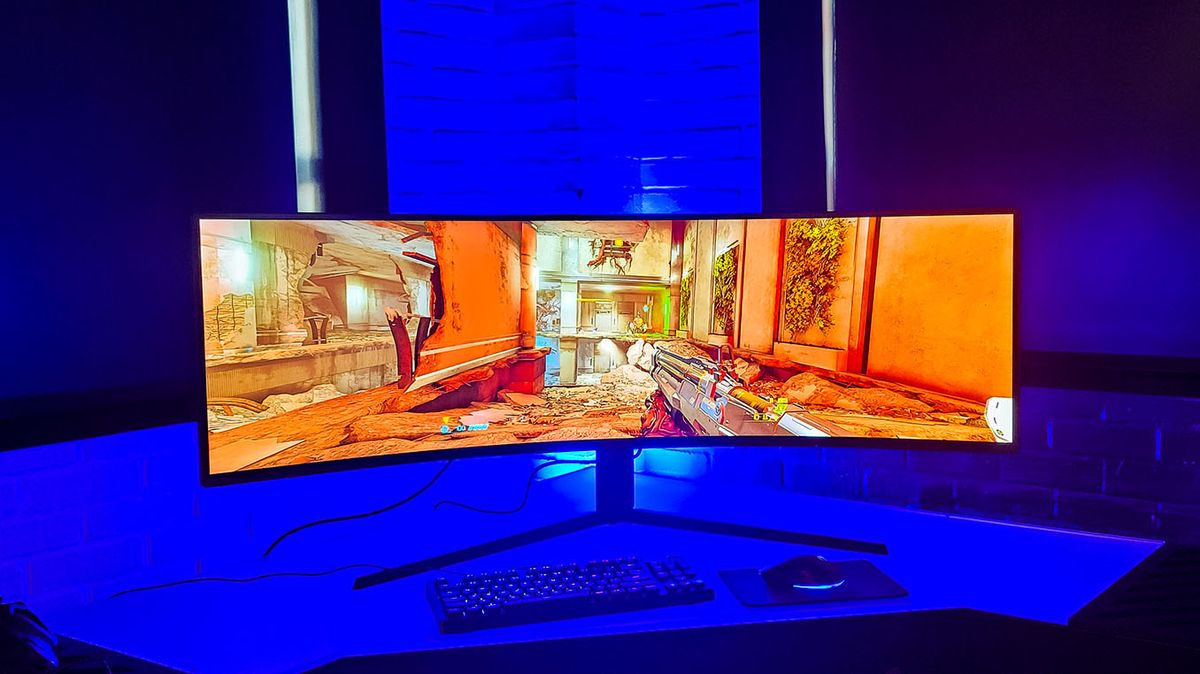 There are few gaming monitors out there more luxurious than the Samsung Odyssey G9. The massive 49-inch monitor rocked a massive 5,120 x 1,440 resolution with a 240Hz refresh rate and even backed it up with an HDR 1000 rating. However, 2021 is a whole new year and now we’re getting the Samsung Odyssey Neo G9, which takes everything that the Odyssey G9 did and turns it up to 11.

We’re talking about better lighting, an HDR 2000 rating and a move to Mini-LED technology, which makes the Samsung Odyssey Neo G9 one of the most advanced gaming monitors we’ve ever seen. However, not only will you need one of the best gaming PCs – probably something like the RTX 3080 as a minimum – the Neo G9 is even more expensive than it was last year.

This is, by far, one of the most expensive gaming monitors on the market, but it does bring a lot to the table that other gaming monitors simply can’t match. To our knowledge, this is the only gaming monitor with an HDR 2000 rating, which means it knocks the socks off of even the Asus ROG Swift PG27UQ, and will probably provide the best HDR in a gaming monitor today – though we need to give it a bit more testing before we can back that up.

This is definitely a gaming monitor that you should only buy if you have a bunch of money burning a hole in your pocket. But, we can say that it will feel like an extremely luxurious product.

We went hands-on with the Samsung Odyssey G9 in a dark room in the back of Samsung’s flagship store in New York, and so we can’t really go too in-depth with the overall design aesthetic. But we can say it doesn’t seem to have changed much.

The back of the monitor is still a white plastic with a big RGB light ring in the back, and the bezels seem basically the same size as they were last year. And, just like the previous model, this is a gigantic display. 49 inches might not seem like much if you’re used to playing on a console in your living room, but a 49-inch display with this aspect ratio will take up your entire field of view when you sit down in front of it.

As such, you’re going to need a large desk to even fit the monitor, and it’s going to need to be able to hold substantial weight as well. We don’t have the final dimensions for this monitor, but given that the Samsung Odyssey G9 was 31 lb without a stand, we’re just going to assume that you’ll need a sturdy desk to use this gaming monitor, too.

It does have a standard VESA mount, and you can even wall-mount it, and Samsung told us that this was probably the way to go. We even asked what kind of VESA mount you’d need to mount this beast of a screen – the Samsung rep laughed and said “a big one”. So yeah, probably best to use the included stand or mount it on a wall.

It’s hard to overstate just how much this monitor will blow you away the first time you use it. Samsung was somehow able to double the peak brightness over the 1,000 nits in last year’s model to 2,000 in the Samsung Odyssey Neo G9. That gives it an HDR 2000 rating, which is the best HDR you’ll find outside of just playing your PC games on a top-end OLED TV.

That alone would be impressive, but it also includes Samsung’s new Quantum Mini LED tech, which is behind its latest QLED TVs. So, the Samsung Odyssey Neo G9 has 2,048 local dimming zones, which is a massive improvement over the measly 10 dimming zones in last year’s model.

In fact, one of the only things we didn’t like about the Samsung Odyssey G9 when we reviewed it in 2020 was that in dark scenes there was a bit of bloom emitting from light areas of the screen. This was extremely noticeable in loading screens, where the rest of the screen is black and you just had a little logo in one corner of the screen. It would just light up that entire corner and it looked a little obnoxious.

It wasn’t a deal-breaker by any stretch of the imagination but it’s just not a problem this time around.

We spent probably about 10 minutes or so playing some Doom Eternal – including failing over and over on a platforming section – and we were blown away by how good the game looks. The high-end HDR makes all the colors pop on the screen, and all the local dimming zones make darker parts of scenes look incredible. And, well, there are a lot of dark areas in that game.

But it doesn’t just look good. Doom Eternal is a game that really benefits from a fast screen, and the 240Hz refresh rate made it feel incredibly smooth on top of the mind-blowing visuals.

Still, with a monitor that costs as much as the Neo G9, you’re going to want to give it some room to grow in the future, and it will be a long time before this monitor’s performance is considered standard.

The Samsung Odyssey G9 is a luxury product in every sense of the word. This is a $2,499 (about £1,809, AU$3,386) display, which is more expensive than pretty much anything else on the market right now.

But it bringing some of the most advanced display technology available over to the PC gaming space, which will make it worthwhile to gamers that want to be on the very cutting edge. And, likewise, those are the only PC gamers that will likely be able to even power this display with their gaming PC.

If you want nothing but the very best, this is the gaming monitor you should go for. But for a lot of people, this is just going to be overkill for a very long time.