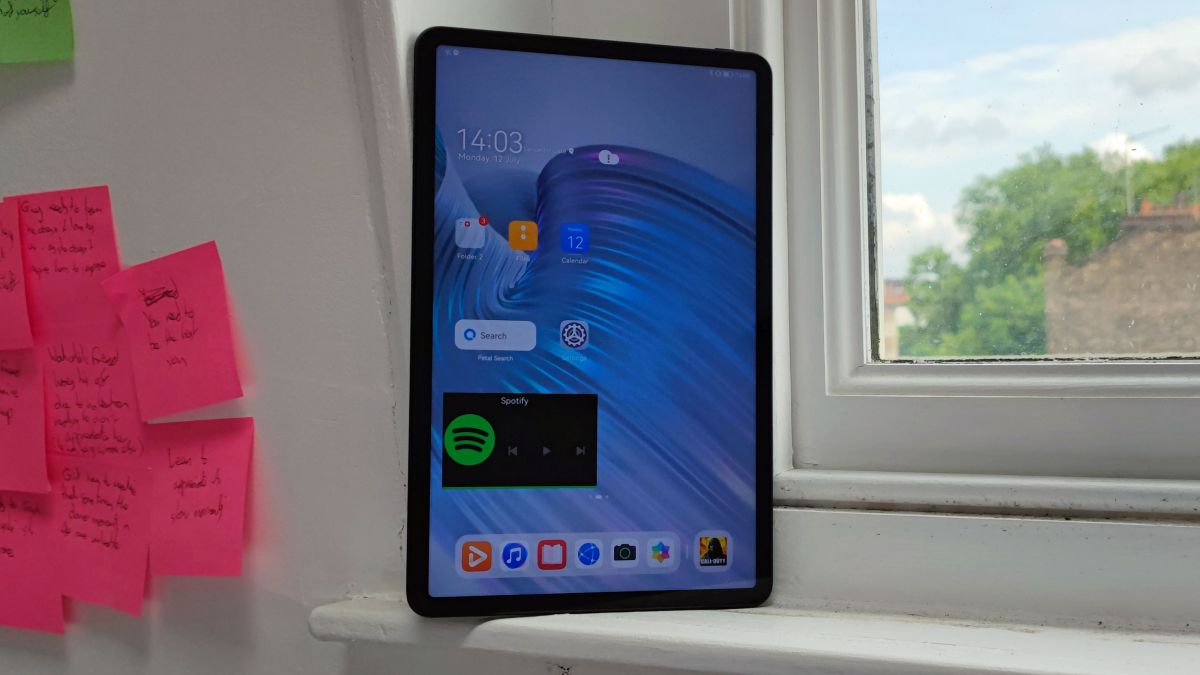 Huawei’s software has come a long way. Thanks to the Huawei ban ensuring Google apps weren’t allowed on devices from the company – mainly, for the purposes of this introduction, the Play Store, and its millions of apps – the company has been desperately trying to find ways to ensure its devices were still worth buying.

Even back in late-2020, over a year on from the ban, the software situation wasn’t solved, and we wrote in our Huawei Mate 40 Pro review “ there’s lots you can’t do on this device – you can’t use most social media platforms, or play many of the games you’d like, or handily navigate around a city.”

By the time of the Huawei MatePad 11, though, that might be solved. This is Huawei’s lower-cost tablet (compared to its contemporary Pro sibling), seemingly an iPad rival which sits below the MatePad Pro 12.6 which it launched alongside.

This slate has top specs, particularly in the processing and screen department, and while it looks and runs like an Android tablet, it actually uses HarmonyOS, Huawei’s own-brand operating system. We’re glad to announce that it has a range of apps to enjoy those specs on – for the most part, though there are some remaining omissions.

We’ve used the Huawei MatePad 11 for a few days now, along with a keyboard folio, and you’ll find our first impressions below. That’s not long enough to decide on a definitive rating for the slate, though, so stay tuned for our full review in the near future.

The MatePad 11 was first announced at a grand event for HarmonyOS in early June, and it was released in Europe from July 12. It doesn’t sound like the tablet is going on sale outside Europe and Asia.

We don’t have a price for Huawei’s tablet just yet, which is an important piece of information that’ll guide our final verdict on the slate. Judging by the specs, we don’t expect this to be a premium device.

If you know what a tablet looks like, you won’t exactly find the Huawei MatePad 11 surprising.

The tablet has a camera and flash module on the back, as well as the Huawei logo. Round the sides are a volume rocker, power button, USB-C port and four speakers, and on the front is the display and a front-facing camera on the long edge (so above the screen when the slate is landscape).

The rear of the slate is made of tough plastic, and it feels pretty durable. This doesn’t matter much if you use the tablet alongside the keyboard folio, as we did – this protects the MatePad, and also turns into a stand with a keyboard. This is pretty useful, although the magnets that hold the tablet to the folio sometimes failed us, causing the slate to fall over.

You can also use the tablet alongside Huawei’s M-Pencil, a stylus for doodling or note-taking, though we didn’t use one of these.

The Huawei MatePad 11 has that number because of its screen, which is 11 inches across (well, 10.95 inches, if we’re splitting hairs). With a high 120Hz refresh rate and 2560 x 1600 resolution it’s a good-looking display, useful for watching videos or scrolling through social media.

Like most non-iPad tablets, the slate is long and thin, with a 1.6:1 aspect ratio. This is pretty useful for multi-tasking, as you can have two tabs open side-by-side.

It is an LCD display, which might put some people off as OLED is considered preferable for gadgets, but that’s one compromise of a low-cost device.

The Huawei MatePad 11 has a 13MP camera on the back and an 8MP one on the front. Neither is going to let you replace your smartphone camera with this tablet, but they’re fine for normal tablet tasks like video calling.

Pictures looked a bit dull, and we’d assume that’s because of a lack of AI image optimization. Still, if you’re just on a video chat with your family, image quality doesn’t really matter too much.

The battery here is a 7,250mAh one, which Huawei says will keep the slate ticking for 12 hours of use. We’d concur, and that’s pretty good battery life – in practice, that meant we could go for several days of use between charges.

That’s good, because charging isn’t exactly quick, at only 22.5W. We haven’t timed how long it takes yet, but we’d estimate it takes about two hours to power up the slate from empty to full.

The Huawei MatePad 11 uses the Snapdragon 865 chipset, which was the top-end Android processor of 2020, and still holds its own as a powerful piece of tech. Thanks to this chipset, and its 6GB of RAM, the slate is super-powerful for games and more.

Yep, there are games – now we can get onto the software topic. While previous Huawei devices have been plagued by a lack of apps, with relatively few titles on the brand’s own AppGallery, there’s a saving grace in the form of Petal Search.

Petal Search lets you find APKs for apps on the web – these are basically app files you install yourself. Type in the name of an app through Petal, and you’ll be able to install it through one of several third-party websites.

There are some things to note about this workaround, which affected our experience. The first Call of Duty: Mobile APK we downloaded didn’t work, and we had to find another. Some apps that rely on Google Drive backups, like WhatsApp, won’t let you install old data. Lots of media apps, like Netflix, only let us stream media in a relatively low resolution, for some reason.

You can even get Google services to work, by using them via the web browser, and adding a shortcut to the page on the tablet’s menu. When we tried this with Docs, though, a weird bug meant that every word we wrote was duplicated, stopping us from writing this review on the slate as we planned. A video below shows what we mean.

The vast, vast majority of apps we use everyday were available via Petal Search, and we quickly amassed a big selection of services, which made it easy to forget the woes of past Huawei devices – almost. The major thing still missing is premium, or paid, apps. As a result we couldn’t download a few platforms we frequently use like certain top-end edit apps, which was another thing that stopped the MatePad being perfect as a workstation.

If it wasn’t clear, our overall experience so far with the MatePad 11 has been largely positive, thanks in part to our gloomy expectations, but it’s far from a perfect device. There are loads of apps you can download now, and lots of people might not experience any differences between using the MatePad and a Samsung slate, for example, but others might notice the rough edges which remain.

We should point out the Huawei MatePad 11 runs HarmonyOS, a new operating system made by Huawei itself. For all intents and purposes, this functions identically to Huawei’s Android overlay called EMUI, though there’s an added emphasis on different gadgets working well together while on HarmonyOS.

We were pleasantly surprised by the Huawei MatePad 11, because unlike some other Huawei devices from the past few years, we could generally use it as our regular workstation. It has loads of apps, a good-looking screen, a powerful processor and a long-lasting battery.

That’s not to say it’s perfect, and the lack of paid apps, aforementioned software issues and slow charging were irritating. As we said, we tried to write this review on the tablet and couldn’t, though depending on the apps you use, you might not find the issues we did.

We also can’t write a final verdict until we know how much the MatePad costs, and therefore what value-for-money proposition Huawei is making.