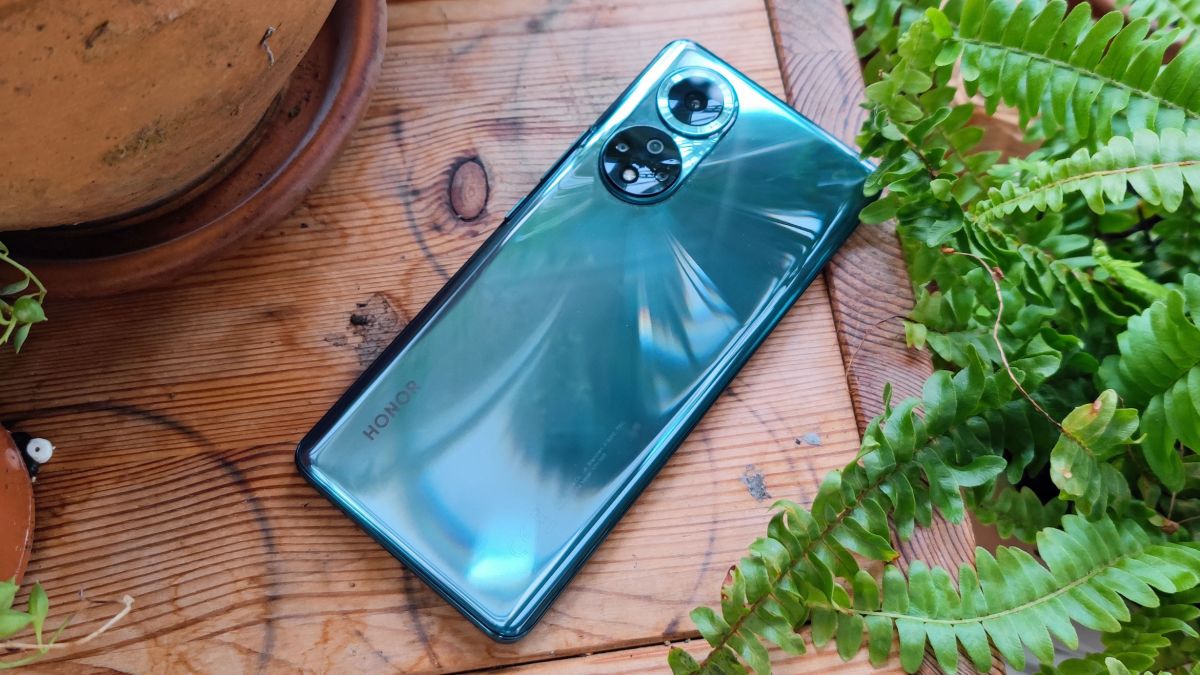 Honor is finally back; not with a bang, not with a whimper, but with a ‘meh’ – the Honor 50 is the brand’s first globally-released smartphone in two years, but it’s not exactly an eye-catching new launch that could turn heads.

In mid-2019, Honor was wrapped up in the Huawei ban shenanigans, which meant the brand’s phones couldn’t get Google apps – until January 2021, when Huawei sold its sub-brand to a conglomerate of Chinese companies.

Honor unveiled the Honor 50 in July and the Honor Magic 3 in August, but neither was available to buy until now, with this re-launch of the mid-range device.

This isn’t exactly an explosive re-launch either, and not just because we already knew everything about the phone. The Honor 50 is decidedly fine, and we didn’t have any huge issues with it, but there’s nothing it does particularly impressively in order to get ahead in the competitive mid-range market.

Well, we presume mid-range based on the specs – we used a test unit for a week to write this hands-on review, but at no point were we told a price. It’s impossible to write a conclusive verdict without knowing how much a phone costs, but the device will need to be surprisingly cheap to wow us.

After an initial unveiling in mid-July, the Honor 50 got officially released for a global market in late October.

TechRadar wasn’t provided this price before publishing this initial review – that means when writing this piece, we weren’t aware of the cost of the device, so take our analysis with a pinch of salt.

The Honor 50 is curiously similar in terms of design to the Huawei Nova 9, right down to the dimensions, weight and rear camera design. The companies may have divorced, but it’s apparent they’re not quite over each other just yet.

The device measures 160 x 73.8 x 7.8mm and is quite light, weighing in at just 175g. With its curved screen, the device feels comfortable to hold in the hand, and the fact the power button on the right edge is easy to reach, just wins the phone more ‘hand-feel’ kudos.

The phone comes in black, silver and green versions, though the last of those looks gray under certian lights – there’s also a special pearlescent version with the letters from Honor’s name plastered over the back. This model might be an acquired taste.

The back of the phone has a camera bump, which consists of two circles – the top one has the main camera lens and the lower one has the three other lenses as well as the flash module.

We’re fans of the Honor 50’s display. It’s a 6.57-inch OLED panel with a FHD+ resolution, 120Hz refresh rate and 300Hz touch input rate. The display curves at the edges and is broken up by a cut-out for the front camera at the center of the top edge.

Those are fairly average specs for a mid-range phone, but when the average display is so good-looking, that’s no bad thing. The display is punchy, with bold colors and a commendable max brightness, and it made games and streamed videos look good.

Some people love high refresh rates and others aren’t as impressed; we’d recommend that latter group test the Honor 50 though, because motion seemed even smoother on the phone than on other 120Hz displays. It seems the software animations are designed to emphasize this high rate.

One display issue we had was with the always-on display, as while the feature is present in the phone, it often just didn’t turn on. We couldn’t spot any rhyme or reason as to why it’d work sometimes and not other times – phones with AODs turn it off when the device is face down, as you wouldn’t be able to see it, but that wasn’t the case for us. Hopefully a software update will fix this.

The Honor 50 has four rear cameras, but four is certainly not a party with one good, one okay and two rather useless snappers.

The main snapper has a 108MP sensor, and takes photos using 9-in-1 pixel binning to combine every nine pixels into one giant one – this means the sensor ‘sees’ lots of light, and the resulting pictures are 12MP.

We found photos taken on this camera looked bold and bright, even in low light settings, which isn’t something we can say about all 108MP camera phones. Autofocus was quick and the natural-looking depth effect made close pictures look even better.

While the price hasn’t been confirmed, this isn’t likely to be the cheapest 108MP phone, not with the Realme 8 Pro and Redmi Note 10 Pro on the market, but Honor’s scene optimization AI means it could be one of the best with a high-res sensor.

But now onto the other lenses – there’s an 8MP ultra-wide, 2MP depth-sensing and 2MP macro snapper. The first of those is useful for taking snaps with a wide field of view, though pictures weren’t quite as colorful or high-res as on the main camera.

The 2MP cameras were the real weak links though, and there’s a trend of phone companies using low-res auxiliary cameras like this that don’t add much. Macro pictures were grainy and pixelated, while the depth sensor didn’t seem to add anything that wasn’t already present from the lens.

The lack of a competitive edge is particularly noticeable in the Honor 50’s camera – if its 2MP duo were gone in favor of a Xiaomi-style custom-made macro camera, or even a telephoto snapper, the phone would be far easier to recommend for photography.

If there’s one thing we did like about the Honor 50’s camera capabilities, it’s the 32MP selfie snapper – subjects looked bold with boosted highlights and shadows, and natural-looking depth effects to make photos look great.

Let’s quickly move onto another positive: the battery life. The Honor 50’s 4,300mAh power pack doesn’t seem like anything to write home about on paper, but in practise the device easily waltzed through a day of use without needing to be charged.

On most days, we were on around 30% or 40% battery when we woke up for a second day of use, which is a good sign for the phone, and that was even with quite a lot of social media use and gaming. Clearly, some software optimization is pulling its weight here.

There’s 66W charging, which is pretty fast for a mid-range phone, though there are devices at 90W and 120W. According to Honor that’ll power the phone to 70% in 20 minutes – in practice, we didn’t get this same speed, but will try with a few other chargers for our full review to see if it’s a cable issue.

The Honor 50 boasts a Snapdragon 778G chipset, which is one of the more powerful mid-range processors you’ll find in a smartphone, though won’t hold a candle to processors from the Snapdragon 800 series.

We found the Honor 50 felt snappy, and in day-to-day use we couldn’t tell the difference between this phone and one with a top-end chipset. Basic tasks like navigating the user interface, checking social media and downloading apps were nice and snappy.

Some games played well too, but the choice of chipset was most noticeable for high-end tasks – now and then, when playing top-end games or taking lots of pictures in a row, the device could slow down somewhat.

The software here is Android 11 with Honor’s Magic UI laid over the top – and yes, just to clear any doubt, Google apps are available on the phone, including Maps, Pay and the Play Store.

Magic UI has a fairly babyish look with punchy colors and big icons, but navigation is the same as it would be on any other Android phone.

As our early review points out, there are some strong parts to the Honor 50, like its good-looking screen and captivating selfie camera, however none of these things are enough to pull this device ahead of other mid-range mobiles.

It’s a well-rounded phone but with no unique selling point, so unless its price is spectacularly low, it’s going to have a hard time proving itself in a competitive market niche.

Perhaps our further testing for our full review will let us appreciate the phone more, and find a feature we can sing about more.