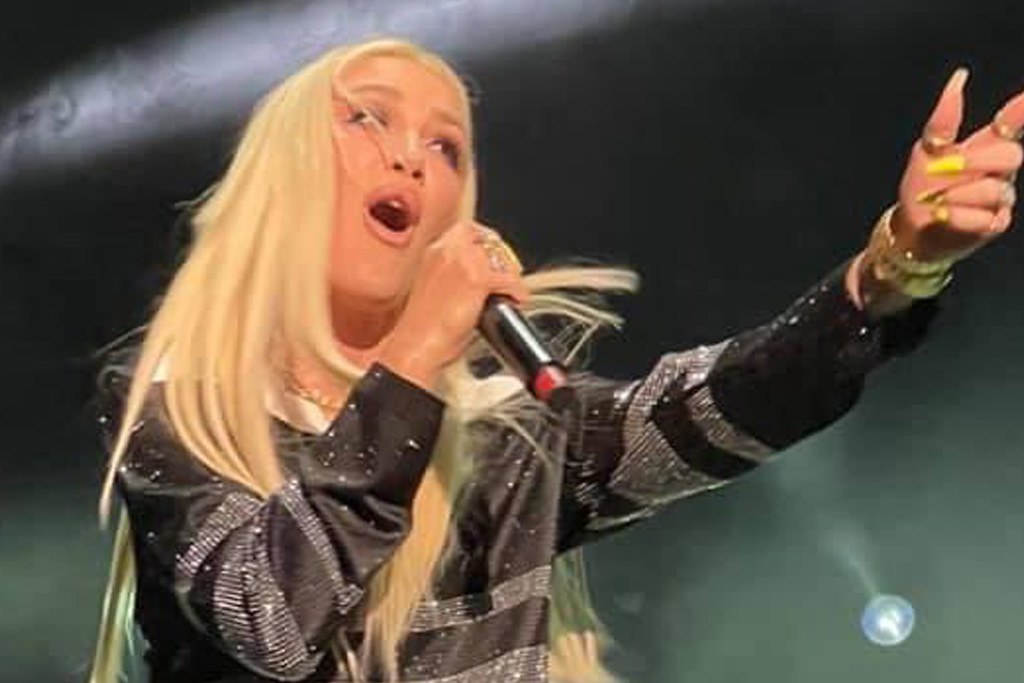 Though it’s been years since her days in No Doubt, Gwen Stefani’s edgy-punk style seems to be sticking around for good.

The “Hollaback Girl” singer performed at the Iowa State Fair in Des Moines, Iowa, on Friday in rockstar fashion alongside husband Blake Shelton. For her time on the stage, Stefani tapped Retrofête in its Joie glittering top. The reimagined rugby shirt includes a contrasting white collar with silver and black stripes; while it originally retailed for $715 for fall ’20, fans of the style can now find it on sale for $501 on the brand’s website.

In addition to her glittering top, the “Sweet Escape” singer also broke out a pair of zipper-coated cargo pants with a 2000s-chic camo print.

Camo and cargo pants were all the rage decades ago, favorited by the likes of Paris Hilton, Jennifer Lopez, Beyoncé and more style stars from the early aughts. The revitalization of the throwback design comes amongst a return of late 1990s and early 2000s trends across the celebrity fashion scene — think square-toe sandals, low-rise pants and bandana headscarves.

As for Gwen Stefani herself, when it comes to her looks both on and off the stage, her style can be described as punk rock-chic, always including a twist of glam. Whether she’s in Sophia Webster butterfly sandals or Crocs camouflage clogs, the “Don’t Speak” singer knows how to pull off an unexpected style. Her go-to brands include Gucci, Paris Texas, Vans and more when it comes to footwear.

She also introduced her own line of apparel L.A.M.B. in 2003 and has partnered with L’Oreal, Revlon and Tura GX for campaigns and collaborative collections. Stefani’s career has also extended into the television world with former role judging new musical talent on “The Voice” alongside her now-fiancé Blake Shelton as well as Kelly Clarkson and John Legend.

Click through the gallery for a look at Gwen Stefani’s street style evolution.