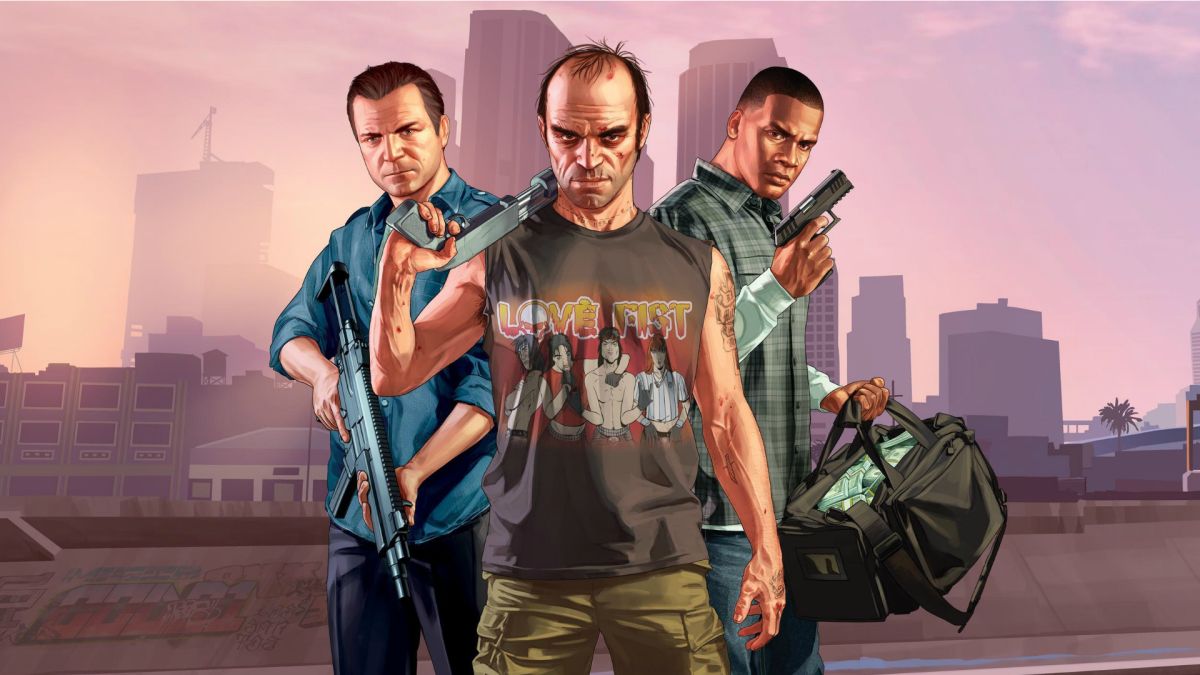 GTA 5 PS5 and Xbox Series X is happening. The iconic GTA 5 will have released on three generations of consoles after it arrives, “expanded and enhanced”, on the new consoles this November. More than seven years after its first release, and 130 million copies shipped later, GTA 5 (and its multiplayer component, GTA Online) is still enormously successful for Rockstar Games and Take-Two Interactive. Even if it means you’re not getting GTA 6 in the immediate future, the key intent here is keeping GTA Online’s player base engaged across generations.

If you already have a PS5 or Xbox Series X, thanks to backwards compatibility you can of course play GTA 5 right now. But you won’t get to enjoy any serious next-gen improvements until the new version is released on November 11, 2021. We still don’t know exactly what its expansions and enhancements will involve – though Rockstar has said these versions will bring “new features” – but we’re hoping it’s only a matter of time before we find out more given that release date is fast-approaching.

Want to know more? Here’s what we know about GTA 5 on PS5 and Xbox Series X so far.

GTA 5 PS5 and Xbox Series X: what you need to know

Rockstar has confirmed that GTA 5 is coming to PS5 and Xbox Series X/S on November 11, 2021, bringing “new features and more”.

GTA Online will also release as a separate standalone edition on November 11. Could this be a deliberate move to reduce GTA’s storage demands, and allow the multiplayer component to do more ambitious things? Or is it simply to position GTA Online as a continuous entity, even if another numbered GTA gets announced in the next couple of years? We’ll have to wait and see.

PlayStation owners have a significant advantage in all of this. If you play GTA Online on PS4, you’ll get GTA$1 million to spend in-game every month until the PS5 version of GTA launches. And when GTA Online’s standalone edition arrives on PS5 in November, owners of the console will have three months to claim the game for free after release – until February 2022. That means that Xbox Series X/S owners will have to pay if they want to play the new version of GTA Online at launch, though a price hasn’t been disclosed.

It remains unclear if GTA 5 on PS5 and Xbox Series X will offer those who own the game on PS4 and Xbox One a paid upgrade option or whether these new versions will need to be bought outright.

GTA 5 on PS5 was the first trailer revealed for the console during Sony’s Future of Gaming Event in June 2020. The intro, featuring Michael saying ‘Why did I move here? I guess it was the weather” parallels GTA 5’s famous first trailer in 2011. We haven’t had a similar trailer for Xbox Series X yet. Check it out below:

GTA 5 PS5 and Xbox Series X enhancements: what are they?

“The new generation versions of GTA 5 will feature a range of technical improvements, visual upgrades and performance enhancements to take full advantage of the latest hardware, making the game more beautiful and more responsive than ever,” is how Rockstar describes the upgrades for GTA 5 on next-gen hardware.

Rockstar hasn’t been overly specific with what the enhancements will be, though there have been reports of it managing 4K and 60 FPS on PS5 thanks to a post on the Official German PlayStation blog. This hasn’t been officially confirmed by Rockstar just yet but it’s something PC players can already achieve. We’d speculate that the game is likely to resemble the PC version as it runs on high-end hardware – though it’s possible Rockstar is planning other tweaks we don’t know about yet.

Rockstar has also teased that GTA 5 and GTA Online on PS5 and Xbox Series X will bring “new features and more”.

We expect Rockstar will confirm these enhancements in the near future, given that GTA 5 is set to land on PS5 and Xbox Series X in November

GTA 6 simply isn’t ready yet. While we know almost nothing about the next entry in the series, these games are grand undertakings for massive worldwide development teams. Red Dead Redemption 2, of course, was Rockstar’s last major project, and expecting GTA 6 so soon after that is unrealistic.

In the meantime, GTA Online has an enormous audience, and the game is sustained by continuing sales of GTA 5 and in-game currency. Rockstar likely wants to maintain that interest between generations until GTA 6 is finally ready.

The German PlayStation Blog may have spilled the beans on some features players can expect when they return to Los Santos this November. Namely, the current-gen versions of GTA 5 will support 4K at 60fps, at least on PS5.

The blog entry – loosely machine translated – reads: “You have never seen the criminal metropolis Los Santos so beautiful when the skyline shines thanks to a bold graphic update in crisp 4K resolution and you make the city extremely smooth and unsafe thanks to a smooth 60 FPS.”

Rockstar has yet to reveal any official details about Grand Theft Auto 5’s current-gen update, so while the official PlayStation blog is as trusted a source as we can get until then, it’s still best taken with a grain of salt until the developer itself confirms support for 4K and 60 FPS. It’s also worth noting that these details specifically relate to the PS5 version of GTA 5, and the post doesn’t say anything about how the game will perform on Xbox Series X and Xbox Series S consoles.

It’s unclear whether or not these features would be separated by different Quality and Performance modes as is often the case. Or, there’s a chance dynamic resolution could be employed, temporarily lowering it from 4K to help maintain that 60 FPS performance.

Rockstar has announced on Twitter that when GTA Online hits the latest consoles, “select vehicles will be upgradable” on the PlayStation 5 and Xbox Series X/S versions of the game, with “all new speed improvements and more”.

“These special upgrades will be available only on PS5 and Series X/S versions of GTA 5,” the Tweet confirmed, adding, “stay tuned for more details.”

When GTA Online launches on PlayStation 5 and Xbox Series X|S later this year, select vehicles will be upgradable with all new speed improvements and more. These special upgrades will be available only on PS5 and Series X|S versions of GTAV — stay tuned for more details. pic.twitter.com/R9SS2miSC8July 18, 2021

The tweet doesn’t go into a huge amount of detail, not revealing the exact nature of these upgrades. It also leaves some users with questions, specifically whether PC players will have access to these upgrades and whether or not current-gen players having faster, upgraded cars means there’ll be no cross-gen cross-play.

Release date confirmedRockstar Games confirmed in a blog post that GTA 5 and GTA Online will land on PS5 and Xbox Series X/S on November 11, 2021. These enhanced versions will apparently have “new features and more”, with an “added bonus” being that this summer’s updates to GTA Online will “include special benefits for players to take advantage of in these expanded and enhanced versions when they drop”.

In addition, Rockstar stated that in honor of the 20th anniversary of Grand Theft Auto 3, it will have “even more fun surprises to share — including some specifically for GTA Online players”.

Not a ‘simple port’Speaking during the Morgan Stanley Technology, Media & Telecom Conference, earlier this week (via VGC), Take-Two’s CEO, Strauss Zelnick, explained that the company doesn’t necessarily see remasters becoming a bigger part of the company’s strategy going forward, it plans to approach any potential remasters differently from its competitors.

“Remastering has always been a part of the strategy,” Zelnik said. “We’ve done differently than the competition – we don’t just port titles over, we actually take the time to do the very best job we can making the title different for the new release, for the new technology that we’re launching it on.”

“So, we improve the technology, we upgrade the visuals, and we make performance enhancements,” Zelnik continued. “And that’s why I think our remastered titles typically do so well.”

“We’ve done great with the Mafia series, for example, and Grand Theft Auto [V] is now heading into its third generation which is incredible”, Zelnik said of the upcoming GTA 5 remaster. “It was a standard-bearer when it was launched, it continued to be the standard-bearer in the second generation, we’ll see how Grand Theft Auto does in the next generation. Obviously, I’m confident that Rockstar is going to deliver just a great experience, but you can’t do that if you’re just doing a simple port.”

The rumors come from Rockstar insider ‘Tez2’ (Via Wccftech) who posted on  GTAForums that new GTA 5 game data makes reference to the RAGE engine rather than GTA 5’s original engine. Tez2 does also note, however, that this could mean that the game’s UI will run on the new engine while the rest of the game will still use its original engine.

Writing on the forum, Tez2 says “Found out new structs that were added with the recent update relating to the standalone version and one of them is “rage::fwuiMessageBase”, which is from RDR2’s RAGE version, so that seems to go along what @Spider-Vice & @uNi stated, that the enhanced edition is likely to utilize RDR2’s RAGE version. However, it could just be that the UI would utilize RDR2’s base code, while the rest remains the same.”

As these are just rumors at the moment, however, we should be wary until Rockstar itself makes any kind of announcement.

We’re also still waiting for further information on how this edition is ‘expanded’ for new consoles, as the trailer mentions, but Rockstar will discuss the new version of the game more down the line.