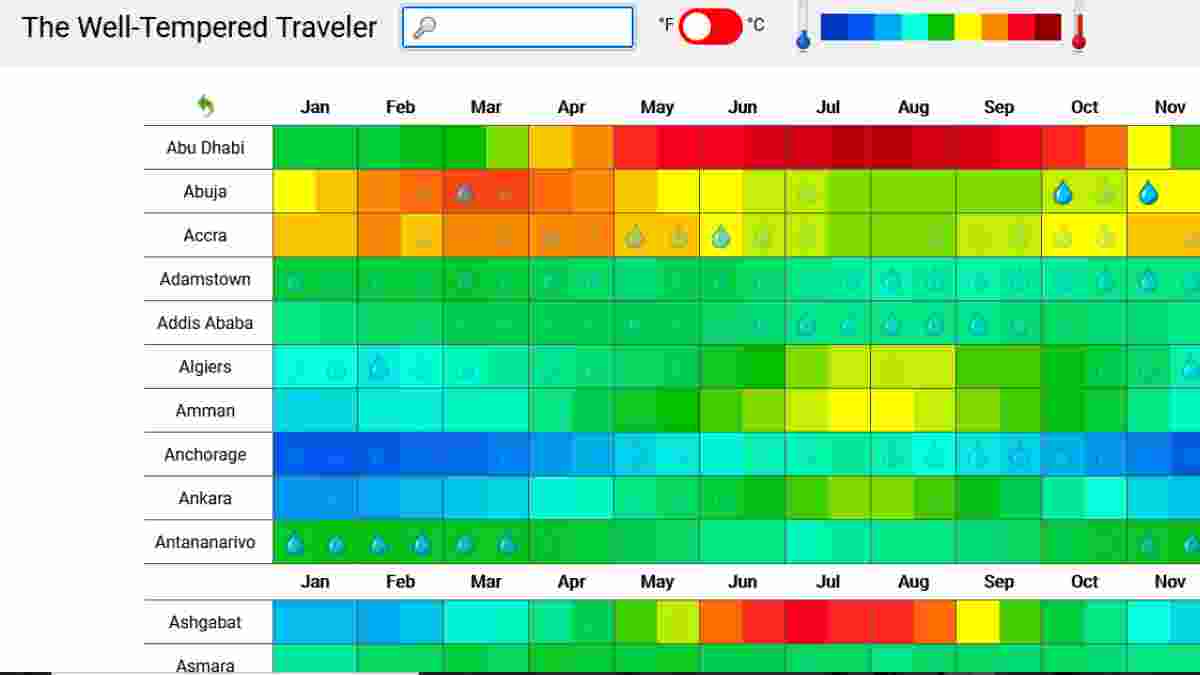 A software engineer and cartoonist at Google, who quit the company after more than 14 years, had developed an interesting tool that showed what the temperature would be like around the world through the year. The tool, dubbed The Well-Tempered Traveler, was developed as an internal project and has become a topic of intense debate on Hacker News, soon after Manu Cornet quit the tech giant reportedly due to disagreements over some of the decisions Google made. However, his tool is still available on Google’s domain as a testament to his contribution to the company.

Cornet launched the tool in October 2017 and sought feedback from Twitter users to improve the initial version to add features they would want in it. Many found the tool, that can be really helpful for travellers in planning their trip around the world, interesting.

When you visit The Well-Tempered Traveler’s webpage, it throws up a colourful chart showing the temperature in two parts (fortnightly) for every month and the possibility of precipitation for the entire year. Take New Delhi for example. The chart shows the likely weather pattern for the year, starting with harsh winter days in January and then gradually moving towards a rise in temperature in April. After the peak summer in May–June, it predicts monsoon from June-end till September-end. And then again, a decrease in temperature. For a traveller, who is not familiar with the weather of India, this can be a nice way to plan a journey.

Now, working with Twitter, Cornet was known as the “moral bellwether” at Google. He published hundreds of cartoons, known as Goomics, that initially poked fun at the tech giant’s culture and employees’ sense of entitlement but then became a critique of senior leaders. During a recent interview with The Information, Cornet said of his decision to leave Google, “At some point, I have to draw the line in the sand somewhere.”

Now, an intense debate has been gaining traction on Hacker News about Cornet, his tool, and Google.

The post has got 170 comments in two days, most of them praising the tool and lamenting the work culture at big companies.

“The HN (Hacker News) response here is a pretty good demo with regards to why large scale companies have a hard time trying out new things, IMO. And why smaller companies are able to bubble to the top on occasion,” said a person with username yupper32.