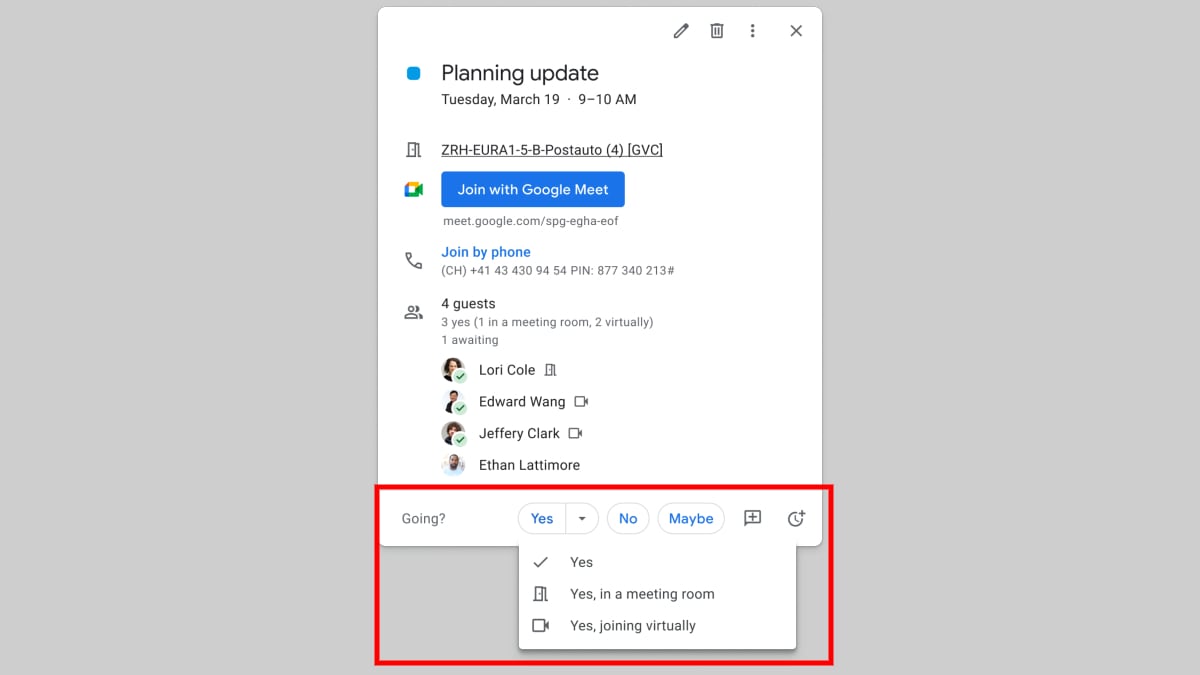 Google Calendar has started to roll out a new option in the RSVP menu that will allow users to indicate if they will be attending a meeting in-person or virtually. It will be present alongside the option that indicates that the recipient will be physically present for the meeting. Google says that this change is a part of making Google Calendar more flexible to suit the hybrid workplace model. Last month, the company rolled out an improved hand-raising feature in Google Meet, making it easier for users to view and acknowledge raised hands and minimise the ruckus during online meetings.

As per a blogpost by Google, Google Calendar will now have new RSVP options under the “Yes” option. A dropdown menu will allow users to select one of three answers: “Yes”, “Yes, in a meeting room”, and “Yes, joining virtually”. While it may not sound like a big change, it surely provides some respite for the organisers of the meeting. In this way, they’ll have an idea of how to accommodate attendees both physically and virtually. Additionally, it will also allow attendees to quickly reply to a meeting rather than write an email to specify their physical or virtual presence.

The new RSVP options will only be available on Google Calendar for now, but the company says it’s working on bringing the same feature to calendar invitations in Gmail soon. Google also says that the join method details are not shared with contacts on other platforms such as Microsoft Outlook. The rollout of the feature is starting on July 8 for all Google Workspace customers, as well as G Suite Basic and Business customers.

Last month, Google Meet got an improved hand-raising feature as a part of an update in Google Workspace. The feature provides audio notifications when the first hand is raised in a meeting, automatically lowers the hand once the person has spoken, and moves the tiles of the people with raised hands to a more visible position in the video grid.

Sourabh Kulesh is a Chief Sub Editor at Gadgets 360. He has worked in a national daily newspaper, a news agency, a magazine and now writing technology news online. He has knowledge on a wide gamut of topics related to cybersecurity, enterprise and consumer technology. Write to [email protected] or get in touch on Twitter through his handle @KuleshSourabh.
More