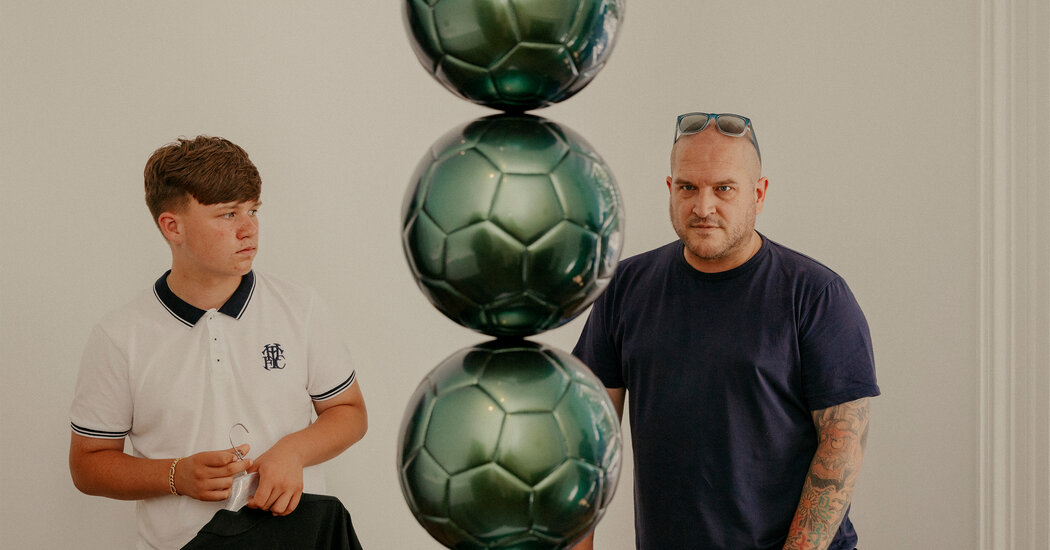 LONDON — Annie Lawrence, 8, was looking excited on Sunday afternoon. She was about to see Tottenham Hotspur, the soccer team she supports, play its first game of the English Premier League season — but her exhilaration wasn’t entirely because of the impending game.

Lawrence was standing in OOF, a gallery dedicated to art about soccer that opened last month in a building attached to the club’s stadium gift shop. Some of the works on display seemed to be making her as happy as a Tottenham win.

OOF’s opening show, “Balls” (until Nov. 21) features 17 pieces of contemporary art made using soccer balls, or representing them. There’s one made out of concrete, and another in silicon that looks like it’s covered in nipples.

Pointing at a huge bronze of a deflated ball by Marcus Harvey, Lawrence said, “I’d like that one in my bedroom.” The artist said in a phone interview that the work might evoke anything from Britain’s decline as an imperial power to the end of childhood.

Yet for Lawrence, its appeal was simpler: “It looks like you could sit in it, like a couch,” she said.

Lawrence then took her father upstairs and looked at a piece called “The Longest Ball in the World,” by the French artist Laurent Perbos. “It’s looks like a sausage!” she said, before grinning for photos in front of another piece that features a papier-mâché soccer ball rotating in a microwave.

Not everyone was so enthusiastic about the works on display. Downstairs, Ron Iley, 71, looked at the ball covered in nipples by the Argentine artist Nicola Costantino. “Load of rubbish,” he said, then walked out.

The worlds of art and soccer don’t necessarily mix. The most well-known recent work to combine both is a bust of Cristiano Ronaldo, the Portuguese player, that made headlines when it was unveiled in 2017 because it looked nothing like him. Other pieces, like Andy Warhol’s acrylic silk-screens of Pelé, are little more than simple tributes to great sportsmen.

Eddy Frankel, an art critic who founded OOF with the gallerists Jennie and Justin Hammond, said he wanted to show that art about football, as soccer is known in Britain, can be exciting, complex and thought-provoking. “We’re using football to express ideas about society,” Frankel said. “If you want to talk about racism, bigotry, homophobia, or if you want to talk community and belief and passion: All of that, you can with football.”

Frankel said he used to keep his passion for soccer quiet in Britain’s art world, since “you can’t really get away with being into both.” That changed one night, in 2015, when he was at Sotheby’s to report on an auction of a monumental painting by Gerhard Richter, the German painter. The sale clashed with a game featuring Tottenham Hotspur, the club Frankel supports, so he started watching the match on his phone. Soon, about 15 people behind him were leaning over to get a view, he said.

“I just went, ‘Oh, so there are people who care about football in the art world like I do,” Frankel said.

In 2018 he launched OOF as a magazine that explored the intersection of his passions. “We thought we’d maybe get away with four issues,” he said. The biannual magazine is now on issue eight.

Setting up an exhibition space seemed the logical next step, Frankel said, adding that he initially wanted to open it in a former kebab shop near Tottenham Hotspur’s stadium, which is in an area about eight miles north of London’s traditional gallery districts. But when he and his partners approached the local council for help, they suggested contacting the club instead, which offered a 19th century townhouse that sits incongruously outside the club’s futuristic stadium and is attached to its gift shop.

Most of the works on display at OOF are for sale, with some pieces worth up to $120,000, yet the gallery has a much higher footfall than most commercial galleries. More than 60,000 fans come to the stadium on game days, and on Sunday, a few hundred spectators peeled off from the crowds for a look around, many dressed in Tottenham Hotspur’s uniform.

A tongue-in-cheek sign at the entrance asks visitors not to kick the art, but not everyone had complied, Frankel said: On a recent visit, Ledley King, a former Tottenham Hotspur captain, had given “The Longest Ball in the World” a light boot.

Pebros, the artist behind the work, laughed when told about the incident in a telephone interview. “Maybe he doesn’t go to many galleries, so he didn’t know,” he said.

The current squad, including its famed striker Harry Kane, had not yet been to visit the gallery, Frankel said. The players were trying to keep social interactions to a minimum during the pandemic.

“Obviously, we’re a commercial gallery so it’d be nice to sell some art,” Frankel said. “But the real success is if we can get loads of people through the door, and get them to engage in contemporary art, who normally wouldn’t,” he added.

Many of the several hundred visitors on Sunday fit that bill. “We don’t go to galleries if we’re honest,” said Hannah Barnato, 27, there with her partner. “But it’s interesting. It’s different,” she said.

Sam Rabin, one of three guides in the gallery who talk the fans through the works, said that was a common reaction. “I’ve never heard the phrase, ‘It’s different,’ more than I have working here,” he said.

But many visitors, especially children, showed a deep connection with the art on display, he said, adding that this proved soccer and art were not the separate worlds they might seem. “They’re both emotional experiences,” he said. “They’re both worthwhile experiences.”