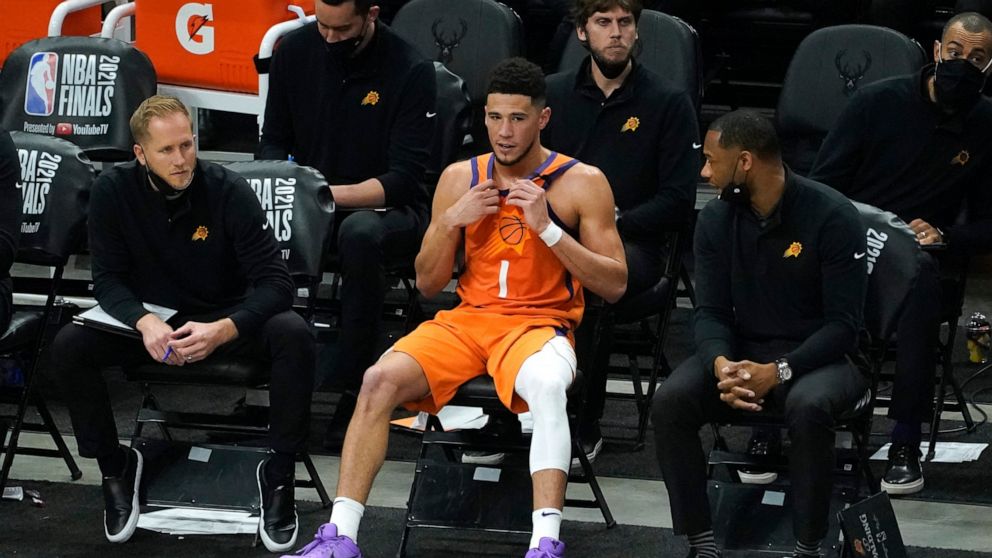 MILWAUKEE — Devin Booker put on a spectacular shooting performance through the first three quarters Wednesday night and seemed poised to help the Phoenix Suns take a commanding lead in the NBA Finals.

Then things got all fouled up.

Booker, who scored 38 points in the first three quarters, picked up his fifth foul early in the fourth. He sat out nearly five minutes and wasn’t quite as effective once he returned as the Milwaukee Bucks rallied for a 109-103 victory to tie the series at two games apiece.

Although he finished with 42 points, Booker wasn’t particularly interested in talking about his individual achievements after such a frustrating finish.

“It doesn’t matter at all,” Booker said. “I said that after last game too, when I struggled shooting it. The main objective is to win the game. So anything (else) that goes on throughout the game, it doesn’t matter, for real.”

The Suns’ inability to protect a nine-point, fourth-quarter lead spoiled an otherwise spectacular performance from Booker, who bounced back from a subpar Game 3 outing and continued his remarkable postseason.

Booker is averaging 27.5 points in the finals. His 542 points in these playoffs are the most by any player in his first postseason, breaking Rick Barry’s 54-year-old record. Booker, Barry and Wilt Chamberlain are the only players to have at least three 40-point games in their first postseason.

“He could have gone for 50-plus tonight,” Suns coach Monty Williams said.

Booker spent most of Wednesday night showing that his 10-point performance in a 120-100 Game 3 loss was an aberration.

He shot 15 of 22 from the floor and 8 of 9 from the free-throw line through the first three quarters.

Williams he could sense Booker would have a big game from the pop in the star guard’s step during Wednesday’s pregame shootaround.

“He was moving really well,” Williams said. “So when he’s moving like that and has his pop, you expect him to get by people and pull up on the dime for a shot. He was curling, getting to the basket, when he can stop on a dime and get guys up in the air, he has his legs underneath him. It’s just something I see in the shootaround when he’s working out. I can tell he’s got his legs.”

With Booker leading the way, the Suns carried an 82-76 edge into the fourth quarter. Cam Johnson extended that lead to 85-76 by sinking a 3-pointer with 11:42 left.

The Suns still led 85-79 when Booker picked up his fifth foul and went to the bench with 10:50 remaining. Phoenix survived his absence and still lead 93-90 when he came back with 5:55 left.

“I wanted to get him in maybe a minute earlier than I did,” Williams said. “You’re just holding on, trying to get as many stops and solid possessions as you can, but it’s not an ideal situation. But I thought we managed it well tonight.”

Booker’s return couldn’t help the Suns seal the victory. The Bucks instead came all the way back as Booker shot 2 of 6 and had just four points in the final period.

The Bucks took a 97-95 lead on a Pat Connaughton 3-pointer with 3:08 remaining. Booker responded 16 seconds later with a pull-up jumper and the Suns regained the lead on a pair of Jae Crowder free throws.

But after Milwaukee’s Khris Middleton tied it at 99-all, Booker missed a 16-footer with 1:42 left and Middleton responded once again to put the Bucks ahead for good.

Booker said he didn’t believe his time on the bench took him out of his rhythm. The Suns instead focused after the game on the 17 turnovers they committed and the 17 offensive rebounds they allowed.

“It’s really tough whenever you can’t win a game, especially at this point in the season,” Booker said.