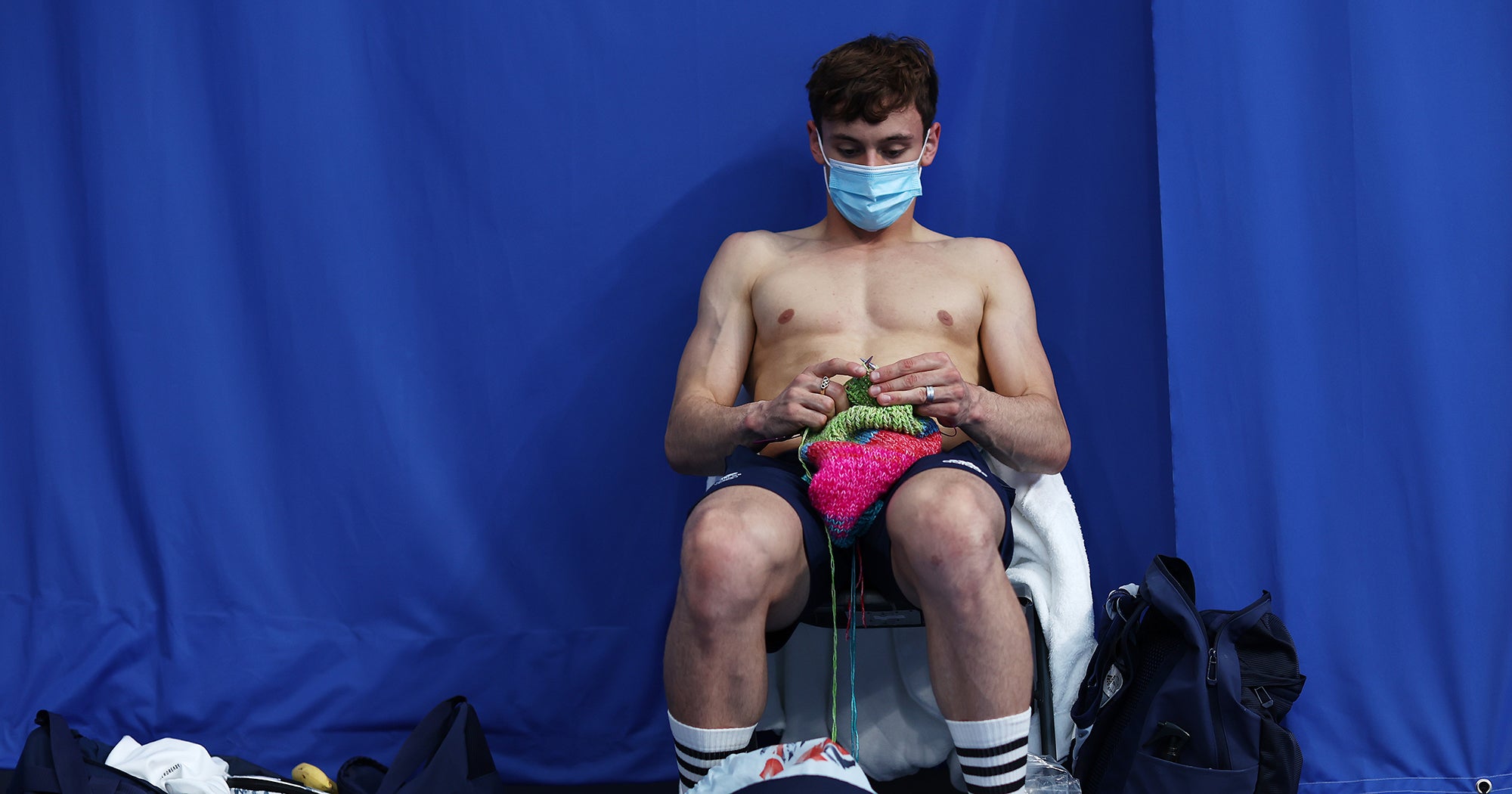 The Tokyo Olympics were full of memorable (and meme-worthy!) moments, but none caught our attention quite as much as the photos of British diver Tom Daley knitting during his time spent on dry land. What was he crafting?, many wondered. The champion revealed his answer via a video on TikTok that showed off his hard work. Apparently, in addition to his gold medal, Daley took two new handmade pieces back to Britain with him: a tiny crochet pouch — a cottagecore-inspired protection device for his medal — and a white cardigan, featuring the Union Jack flag, the Olympic rings, and the word “Tokyo” in Japanese.

Photos of the Olympian knitting in the stands have been circulating online and fans are following Daley’s crochet-focused TikTok account in droves. In turn, demand for similar styles spiked on the global fashion shopping platform Lyst. Specifically: the site saw online searches for “knitted” and “crochet” items increase collectively by 89%. “Knitted cardigans” have been especially popular, according to Lyst, with searches increasing by 41%. Meanwhile “crochet tops” saw a page view increase of 23%.

But unlike his stunning Olympic win, we can’t give all the credit for the rise of crochet and knit fashion to Daley. Not when the crafty trend has been sported by so many influential and style-minded people.

Over a year before Daley took to the high dive at the Tokyo Aquatics Center, fellow Brit Harry Styles breathed oxygen into the rise in popularity of handicrafts when the rainbow knit cardigan that he wore during an appearance on the TODAY show went viral on TikTok. But Styles’ trove of superfans weren’t just obsessed with the “Watermelon Sugar” singer’s eye-catching sweater — they were obsessed with making similar versions, too. Suddenly, thousands of Gen-Zers were picking up their grandmother’s knitting needles in the hopes of twinning with their biggest idol. (Purchasing the sweater was impossible for most under-25-year-olds, given that it cost over $1,500.)

The DIY version of the knit became so popular, in fact, that the designer of the cardigan, Jonathan Anderson of the British label JW Anderson, shared the official pattern for it on Instagram. “I am so impressed and incredibly humbled by this trend and everyone knitting the cardigan,” he wrote. “I really wanted to show our appreciation so we are sharing the pattern with everyone. Keep it up!” And people did. By August 2020, TikTok’s #HarryStylesCardigan — which is stocked full of handmade versions of Styles’ sweater — had 17.8 million views. Today, the page has reached 76.8 million views.

Once they’d completed their DIY doppelgangers, many were keen for another project. In turn, TikTok became a hotbed of home handicraft project-inspo, with crochet bucket hats, balaclavas, bras, halter tops, and more, all becoming big hits on the app. The hashtag #crochet currently has over 3.7 billion views on TikTok, while #knitting has more than 618 million views.

By the time last September rolled around, the needlework trend had surpassed the digital world of TikTok, popping up on runways around the world during spring ‘21 Fashion Month. Crochet sweaters, caps, and handbags appeared on the New York catwalk at Ulla Johnson, as well as in Anna Sui’s lookbook. Weeks later, in Milan, Alberta Ferretti’s spring collection featured puff-sleeve mini dresses with delicate knit details.

The pose. The mittens. The social distance. pic.twitter.com/kwHH7AzZY8

It wasn’t until the 2020 election that knitwear’s second major spike occurred. In November, following the official announcement that Joe Biden and Kamala Harris were to be the next President and Vice President of the United States, rumors began to swirl that Harris’s stepdaughter Ella Emhoff, then a design student at Parsons, would be hand-knitting her Inauguration Day look. Emhoff herself even considered the idea, telling Garage that it was an option. She ended up wearing a Miu Miu bedazzled coat for the momentous occasion, but someone else in the political sphere did wear knitted garb: Bernie Sanders, whose mittens — crafted by a Vermont school teacher named Jen Ellis — quickly went viral.

Since then, we’ve seen street-style stars like Gigi Hadid and Katie Holmes wear DIY-inspired styles of their own, with Hadid wearing a $60 crochet polo top from Mango in June, and Holmes donning an even more affordable $50 knit polo from Mango. More recently, Justin Bieber was spotted at the Beverly Hills Hotel in August, wearing a bright-yellow crochet top from fashion label Casablanca.

As for why crochet and knitwear have become such darlings of the fashion world, well, that’s an easy one. Having spent so much time at home during the pandemic, millions of people were forced to come up with new ways of keeping their hands busy. In turn, simple, attainable activities like knitting and crocheting rose in popularity. At the same time, cottagecore, or the aesthetic surrounding the ease of countryside living, was busy embedding itself in nearly every facet of life in lockdown, from the way we cooked to the things we wore (hello nap dresses!).

But we’re not in lockdown anymore, at least not in the U.S., where 49.6% of the population is fully vaccinated. Because of that, we can at last set down our needles and enjoy the fruits of our labor. Or in my case, watch with heart eyes as Daley models his gold-medal-worthy wares.

Like what you see? How about some more R29 goodness, right here?

Why Are Cardigans Trending On TikTok?