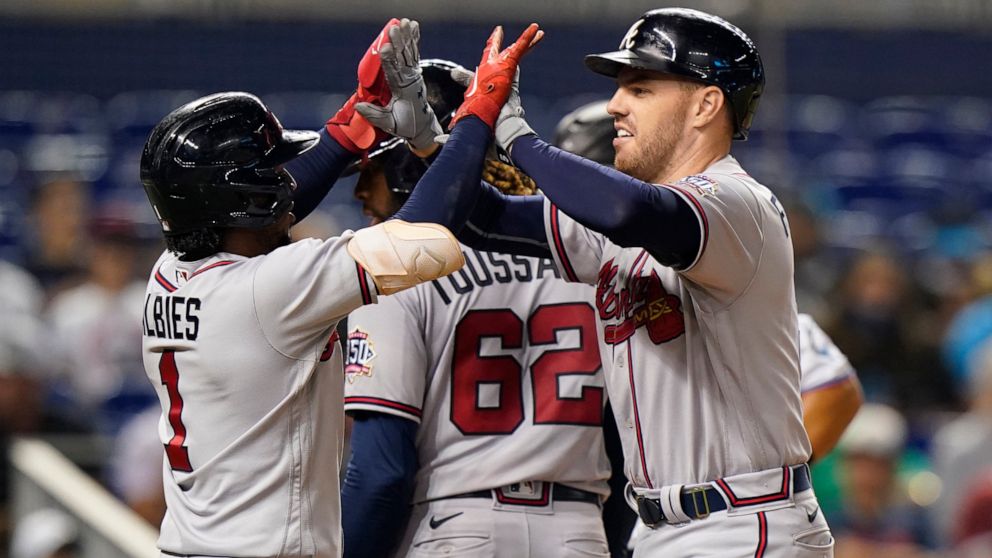 Freddie Freeman and Adam Duvall homered in a seven-run fourth inning, and the surging Atlanta Braves beat the Miami Marlins 12-2

Freeman also singled twice while Ozzie Albies had three hits and three RBIs for the NL East-leading Braves, who have won four straight and 11 of 13.

“Every guy’s clicking right now at the same time, right when we needed it,” Freeman said. “It’s been fun. The line’s been moving a lot lately so that’s all you can ask for as an offense.”

Duvall, who rejoined Atlanta in a trade from Miami on July 30, then drove Campbell’s curveball above the left-field seats. The two-run shot was his 27th homer of the season.

“He’s given us so much over the last couple of years and to bring him back in it was a boost of energy,” Freeman said.

Touki Toussaint (2-2) limited the Marlins to two runs and three hits in 6 1/3 innings. He struck out seven and walked two. Edgar Santana and Jacob Webb completed the four-hitter.

“It’s pretty encouraging to go six-plus and not be five and done,” Toussaint said. “I just kept attacking. If I’m throwing strikes, they’re going to hit balls hard and they’re going to miss them. You can throw the ball in the same spot 10 times and get 10 different results.”

Albies had a two-run single in the sixth and Travis d’Arnaud drove in two more with a double in the seventh.

Jazz Chisholm Jr. homered in the first and Isan Díaz went deep in the second for the Marlins, whose four-game winning streak ended.

“I thought our out at-bats were really good early,” Miami manager Don Mattingly said. “Every swing I felt our guys were right on Touki over there. And then that seven-run inning took the air out of us, and then they kept scoring.”

Garrett walked six batters, including the first three of the game, in three-plus innings. The left-hander allowed three runs on three hits and struck out two, failing to complete four innings in his second consecutive start.

IF YOU CAN’T BEAT HIM

After Duvall tormented Braves pitching during his half-season with the Marlins, Braves manager Brian Snitker is glad to have the outfielder back in his dugout. Duvall hit .368 with five homers and 17 RBI in the 12 games he played against the Braves this season.

“I hope he does to them what he did to us all year,” Snitker said. “We all hated to lose him in the beginning. He’s such a great teammate, person and player.”

Although the Marlins haven’t yet been mathematically eliminated from playoff contention, they are most likely to influence the NL East race in a spoiler role.

Miami has two home games and a three-game road series against Atlanta, 10 games against the New York Mets and six against the Philadelphia Phillies.

“We will have influence as to who wins this division,” Marlins general manager Kim Ng said before Monday’s game.

The Marlins reinstated Jesus Sánchez from the 10-day injured list and designated Deven Marrero for assignment. Sánchez started in right field and went 0-for-3.

Braves RHP Huascar Ynoa (4-2, 3.02 ERA) will make his first start in three months as the series continues on Tuesday. Ynoa broke his pitching hand when he punched a dugout bench in frustration after being removed from an outing against Milwaukee on May 16. RHP Sandy Alcantara (7-10, 3.52) starts for the Marlins.