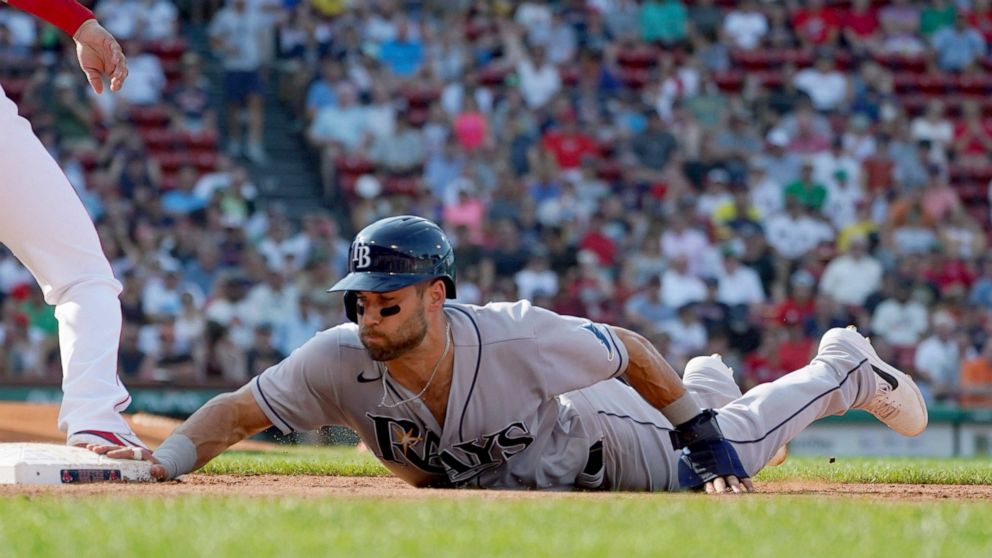 BOSTON — Wander Franco hit a tiebreaking two-run homer in the sixth inning, Drew Rasmussen threw four strong innings in a spot start for Tampa Bay and the Rays added to their lead in the AL East with an 8-1 victory over the Boston Red Sox on Thursday.

Mike Zunino added a three-run homer in the eighth, driving the ball well over the Green Monster and out of Fenway Park, as the Rays took two of three games at second-place Boston and extended their lead in the AL East to five games.

Kevin Kiermaier went 3 for 3 with a walk and scored twice for Tampa Bay, which rebounded from a blowout loss a night earlier with its sixth win in seven games against Boston.

“We talked about yesterday how it got out of hand, but had all the confidence in the world — for good reason — these guys were doing to come back and be ready to go and they were,” manager Kevin Cash said. “These guys, they come to play and they back that up daily.”

One day after setting a season high in runs, hits (19) and walks (nine) in a 20-8 rout of the Rays, the Red Sox’s offensive woes returned Thursday as Boston lost for the 11th time in 13 games.

The Red Sox had just two hits — an RBI double by Rafael Devers in the fourth inning and a single in the fifth inning by Kevin Plawecki was the last hit against the Rays, who got five shutout innings from four relievers after Rasmussen left.

Rasmussen was supposed to “open” for the Rays in his third start of the season and delivered much more with the longest outing of his career. He allowed one run on one hit and two walks with four strikeouts before Collin McHugh (4-1) took over in the fifth.

“I felt really good about how today went and the ability to get that fourth inning, just to give somebody at the back end a chance to catch their breath and take another day off,” said Rasmussen, usually a reliever who a had never thrown more than three innings.

Rasmussen didn’t allow a hit until Devers drove a double to center with two outs in the fourth, scoring Kiké Hernández after a leadoff walk.

Houck pitched into the sixth, when the Rays broke the 1-all tie with three runs. Brandon Lowe led off with a single and Franco followed with a drive to left-center field that hit to the left of the yellow line separating the Green Monster from home-run territory, and the carom took it to the top of the wall in center, near the flagpole. Umpires ruled it homer after meeting.

Franco initially stayed on second until the umpires called the hit a home run after a brief conference in the infield, and Tampa Bay led 3-1. Houck threw 10 pitches in the at-bat before hanging a slider to Franco, who had fouled off six during the at-bat.

“At that moment, you’ve got to tip your hat to the kid that hit a home run there,” Boston manager Alex Cora said.

A bases-loaded balk later in the inning by reliever Hansel Robles pushed another run across. That run was charged to Houck.

Tampa Bay blew it open with four more runs in the eighth, when Zunino hit a three-run shot, his 23rd homer of the season.

The temperature at the start was 95 degrees with very little wind. It was also a 4:10 p.m. start, leaving a few more hours of daylight in the sweltering conditions.

Cash said before the game that the Rays had several backup jerseys ready for Rasmussen, who he described as a heavy sweater.

“I changed pants and jersey after the second inning. Both of those were getting pretty heavy,” Rasmussen said.

Despite taking the loss, Cora credited Houck for a strong performance less than 24 hours after he was recalled from Triple-A Worcester.

“He lost a battle there with Franco in the sixth inning, but overall what we were expecting,” Cora said. “This guy’s going to compete. He’s got great stuff and he’s going to give us a chance to win.”

Red Sox: 1B/DH Kyle Schwarber (right hamstring strain) was scheduled to begin a rehab assignment for Triple-A Worcester on Thursday night. Acquired just before the trade deadline in a deal with Washington, Schwarber has yet to play for Boston. Manager Alex Cora said the Red Sox expect to have Schwarber “sooner than later,” but stopped short of saying whether it could be this weekend against Baltimore. “We’ll find ways whenever he’s here to get him in the lineup,” Cora said. “Obviously he has power, but at the same time, he walks, he gets into deep counts. He’s somebody that we’re looking forward to have and I do believe our offense is going to be a lot better when he gets into it.” … OF Alex Verdugo (paternity leave) was traveling back from Los Angeles for the birth of his first child and wasn’t available for Thursday’s game, Cora said. … Optioned RHP Phillips Valdez to Triple-A Worcester.

Red Sox: RHP Nick Pivetta (8-5, 4.34) gets the start for Boston in the first of three against the Baltimore Orioles.