For Matteo Berrettini, This Wimbledon Was Years in the Making 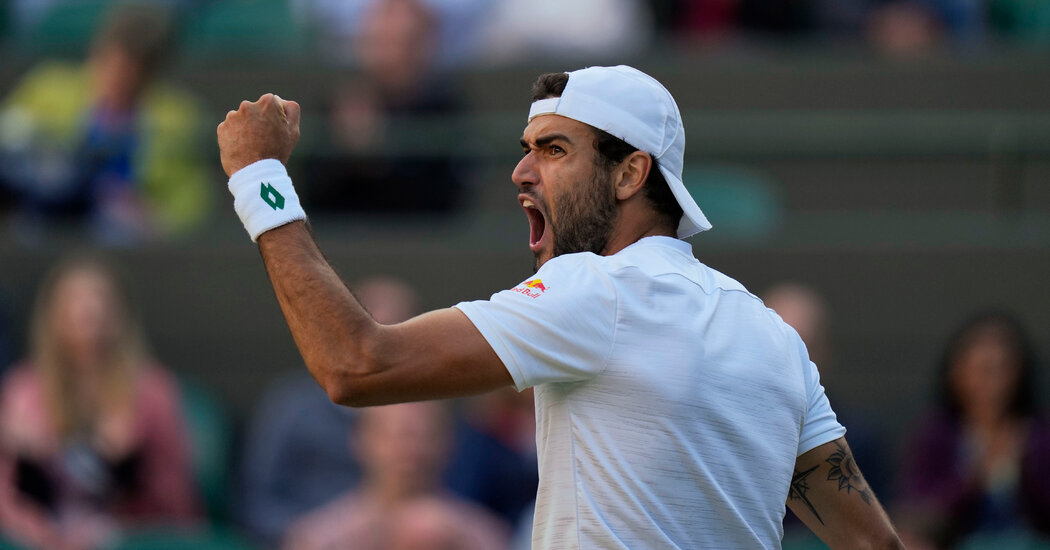 WIMBLEDON, England — Matteo Berrettini has surged into the spotlight this summer.

A 24-3 run that started with a title in Belgrade, Serbia, has carried through to the Wimbledon semifinals, where the seventh-seeded Berrettini will face 14th-seeded Hubert Hurkacz of Poland on Friday for a spot in the men’s singles final.

It has been a long, steep climb for Berrettini since he arrived at a tennis club in Rome at age 14 and was awed by the credentials of the coach he met: Vincenzo Santopadre, whose career-high singles ranking had been 100th.

“I started with him when I was 14, and thinking about being top 100 was for me something crazy,” Berrettini said in an interview. “His best ranking was No. 100, and I was looking at him like, ‘Wow, this guy is great!’”

Berrettini was not one of the best players in Italy in his age range, and Santopadre and the other coaches at the Circolo Canottieri Aniene wanted to give him time and space to decide if tennis was something he wanted to pursue seriously.

In Berrettini, Santopadre saw a player who could break the mold of the typical Italian tennis player who relies on high-spin forehands on clay courts, and he “tried to force him to be less conservative in his game.”

Berrettini credits his early belief in Santopadre’s vision for where his career has gone.

“One of the best things I did in my career was I really trusted Vincenzo when I was younger,” Berrettini said. “He looked at me and saw I was growing a lot, that I was becoming tall, and he told me: ‘Look, you’re going to be an aggressive player. You’re going to serve bombs and try to win the point as soon as you can.”

Santopadre said that while many young players revert to tactics that allow them to win matches at the junior level, Berrettini was committed to the first-strike, high-reward style of tennis that Santopadre wanted him to play.

“He told me that one of the best things we did was that he understood there was a long-term project to be a very good player,” Santopadre said. “He didn’t care about the results when he was younger; he just wanted to improve. His mentality was all on this.”

As he grew to 6 feet 5 inches, Berrettini’s physicality has been honed to make him a powerhouse: Listed at 209 pounds, he is the heaviest player in the ATP top 20, more than 10 pounds heavier than the next player.

Berrettini, who leads remaining players at Wimbledon with 57 percent of his first serves going unreturned, said he drew confidence from knowing he “can serve for five hours.”

“That’s what we worked on: We tried to be explosive, strong, powerful,” Berrettini said. “That’s what I like to do. In tennis you need to be ready for everything, long rallies as well, but those are the weapons we tried to have. Right now, I’m really glad that I trusted them.”

Where Berrettini has failed to bulk up, he says with self-deprecating laughter, is below the knee, leaving him unusually top-heavy for a tennis player.

“That’s why I play with ankle braces, because my ankles and calves are very thin and fragile,” he said. “My family is like that: It’s genetics. There’s nothing I can do about it. I work on my calves, I swear, but it looks like I don’t do it. I do it, and nothing.”

But despite that small disappointment, Berrettini increasingly likes what he sees in himself, growing more confident ever since strong outings at Grand Slam tournaments in 2019 peaked with a run to the U.S. Open semifinals.

“And then, after the U.S. Open, I looked at myself in the mirror and said: When you’re switched on like this, when your weapons are working, when your mind-set is there, you’re really dangerous. And after that, I felt it.”

While top-ranked Novak Djokovic remains the clear favorite in the top half of the draw, Santopadre said Berrettini’s self-assurance that he belongs in the upper echelon of the sport has become as formidable a weapon as his powerful serve and forehand.

Berrettini, who arrived to Wimbledon as a popular pick to reach the final after winning the nearby warm-up event at the Queen’s Club in London, said that after more than a decade of rejiggering expectations of what could be possible, he and Santopadre feel that he is ready to win this tournament.

“I believe that, and my team believes that,” Berrettini said. “It took us a little bit of time, but now everyone is looking in the same direction, and it feels great.”