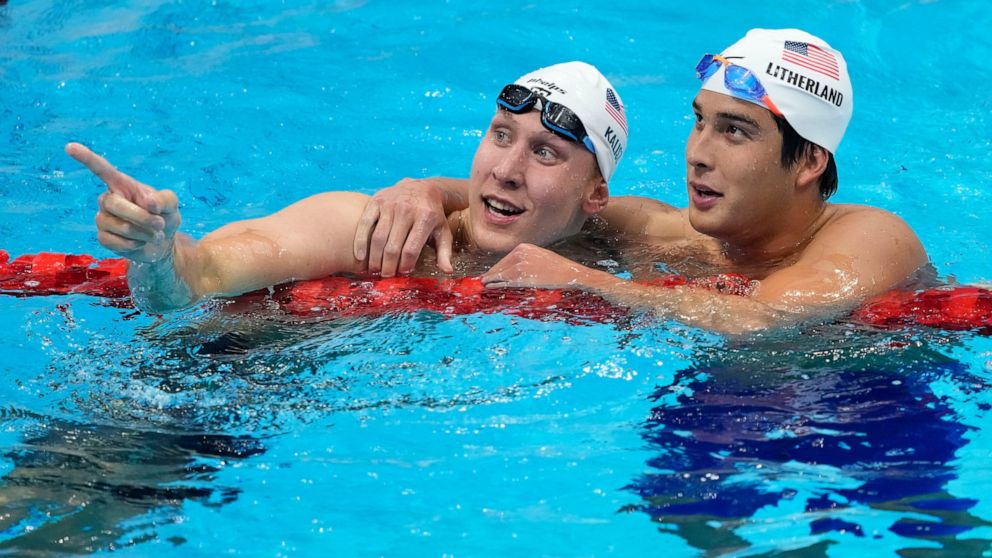 TOKYO — Michael Phelps was up in his broadcast seat, a mere observer rather than the driving force of U.S. swimming.

No need to fret about what he left behind.

The Americans are off to a flying start at the Tokyo Aquatics Centre.

Displaying their trademark depth, the U.S. earned six of 12 medals Sunday on the first morning of finals, showing no signs of slipping even without the most decorated athlete in Olympic history.

From Chase Kalisz’s gold in the 400-meter individual medley to Kieran Smith pulling out a bronze in his first major international competition, there was plenty of red, white and blue on the medal podium in the largely empty arena.

“We were in the warmup pool seeing people get a gold medal, get second, get second and third. It was crazy,” said Abbey Weitzeil, who was part of the 4×100-meter freestyle relay team that claimed a bronze in the final event of the session. “It just fired us up and got us really excited.”

Kalisz got things rolling with his victory in the grueling medley, making up for a second-place showing at the 2016 Rio Games. Jay Litherland rallied on the final leg to give the Americans a 1-2 finish that set the tone for the rest of the morning.

At 27, he knew it might be his last chance to win the race that includes all four strokes, especially after being forced to wait an extra year because of the COVID-19 pandemic.

“It was tough last year with the Olympics kind of getting pulled out from under us and really having so much uncertainty whether it was going to happen,” Kalisz said. “Five years of preparation for this one moment, and it’s not like I was getting any younger.”

Kalisz and Litherland caught a huge break when home-country favorite Daiya Seto shockingly failed to advance from the preliminaries, making a huge strategic error by attempting to conserve his energy for the final.

The Americans took advantage. Kalisz pulled away on the breaststroke, his best leg, and Litherland rallied on the closing freestyle to claim the second spot.

Turns out, the Americans were just getting started.

Smith, who emerged from obscurity with a breakthrough performance at the U.S. trials last month, proved he was no fluke by finishing third in the 400 free behind Tunisia’s Ahmed Hafnaoui and Australia’s Jack McLoughlin.

Japan’s Yui Ohashi took gold in the women’s 400 IM — making up a bit for Seto’s flop — but two Americans were right on her heels.

“After we saw (Kalisz and Litherland win medals), we kind of looked at each other and said, ‘It’s our turn,’” Weyant said. ”I think that really got our team going.”

They weren’t done, either.

While no one had any chance of beating the mighty Aussies in the 4×100 free relay — indeed, they set the first swimming world record of these games — a quartet anchored by Simone Manuel managed to hang on for third.

Katie Ledecky was among those pumped up by the American performance.

Before she swam for the first time in the evening preliminaries of the 400 free, Ledecky’s Olympic Village roommates — Manuel, Flickinger and relay swimmers Allison Schmitt and Natalie Hinds — had already set quite a high bar.

“I can definitely feel the energy,” said Ledecky, a five-time gold medalist and expected to be one of the biggest U.S. stars in Tokyo. “Our whole apartment has something like four medals already. We’re just really excited and really enjoying the experience with each other.”

For Manuel, one of the biggest stars at the 2016 Rio Games, it was an especially poignant medal after her struggle just to make the team. She was diagnosed with overtraining syndrome and forced to take an extended break not long before the trials.

Manuel only qualified in one individual event — the 50 free — but the American coaches decided to use her in the final spot of the relay.

It paid off with another medal.

“I’m always excited and pumped for relays,” Manuel said. “It’s an experience that is amazing. I don’t take it lightly.”

During Phelps’ record-breaking career, which encompassed five Olympics, the Americans never won more than five medals on the first day of finals.

Without him, they did one better.

It looks like the team is still in good hands.