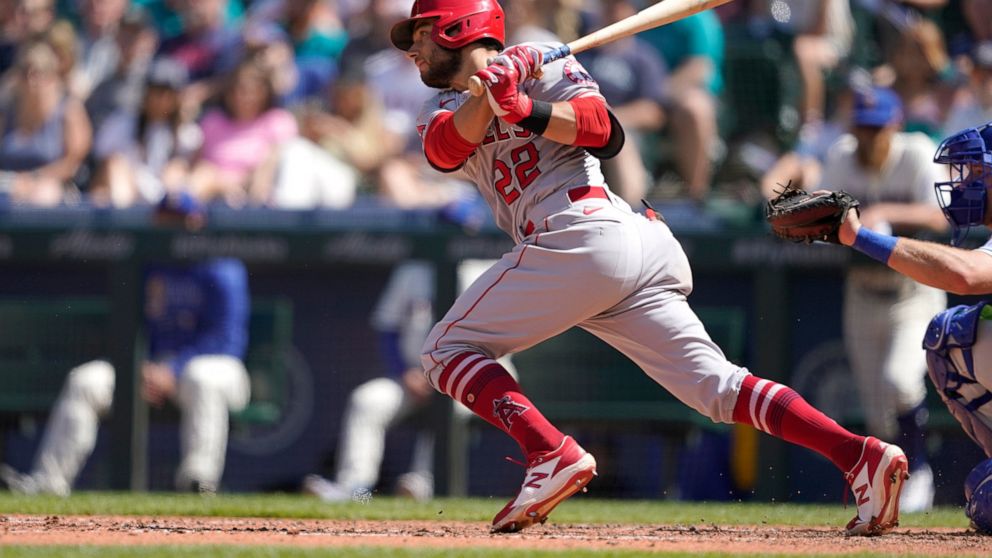 David Fletcher had four hits and four RBIs to extend his hitting streak to 24 games, and the Los Angeles Angels beat the Seattle Mariners 7-1

SEATTLE — David Fletcher had four hits and four RBIs to extend his hitting streak to 24 games, and the Los Angeles Angels beat the Seattle Mariners 7-1 on Sunday.

Fletcher homered in the third inning, drove in two runs with a single in the fifth and added another RBI in the seventh to snap the Angels’ two-game losing streak. The second baseman, who was left off the AL roster for Tuesday’s All-Star Game, finished 4 for 5 after adding an infield single to start a three-run ninth.

“I don’t wish anyone ill, but I’d love to see him sneak into that game on Tuesday,” Angels manager Joe Maddon said.

Shohei Ohtani went 2 for 4 with a double and a walk ahead of his big two days at Coors Field in Denver, where the Angels’ two-way superstar will participate in the Home Run Derby and play in the All-Star Game as both a hitter and pitcher.

José Suarez (4-2) allowed three hits over five innings to end Seattle’s three-game winning streak in an outing Maddon called “not great, but good.” It was his first win as a starter this season after being moved into the rotation on July 5. He struck out four and allowed an unearned run on Ty France’s first-inning sacrifice fly, which was set up by Kurt Suzuki’s passed ball.

Three Angels relievers worked four innings to complete the four-hitter, with Raisel Iglesias picking up his 19th save to help LA avoid the series sweep.

“We didn’t want to get swept,” Maddon said. “That hurts, especially with a team you’re trying to catch.”

Yohan Ramirez (0-1), one of seven Seattle pitchers in a bullpen game, took the loss after hitting Taylor Ward to start the fifth inning, then walking Juan Lagares to set up Fletcher’s two-run single. It was a rare difficult outing this season for the bullpen, which had given up an earned run in just one of its last eight games.

“I don’t want it to overshadow a lot of really positive things that we have done here over the first few months of the season,” Mariners manager Scott Servais said. “And we’ve put ourselves in a position to play some really meaningful games when we get back from the break and leading into the trade deadline, and we’ll see what August and September have in store for us.”

Fletcher’s hitting streak began June 13 and is now the third-longest in Angels history. Rod Carew is second at 25 games and Garret Anderson’s club record of 28 was set in 1998.

It’s the longest hitting streak in the majors since 2019, when the New York Mets’ Wilson Ramos hit safely in 26 straight.

“If you’re around this guy enough in the dugout, in the clubhouse, you’ll always be in awe,” Maddon said.

All-Star pitcher Yusei Kikuchi’s move to the injured list for undisclosed reasons allowed the Mariners to bring up touted catching prospect Cal Raleigh, who made his debut.

Raleigh arrived about two hours before game time and had quite the get-to-know-you session catching Seattle’s bullpen day. The switch-hitter was 0 for 4 with two strikeouts.

“I told him to pretend you’re in high school and just go play,” Servais said.

Mariners: 3B Kyle Seager was again out of the lineup with a bone bruise in his right shin, but was not moved to the 10-day injured list.

Angels: LHP Andrew Heaney (5-6, 5.38 ERA) will face the Mariners coming out of the All-Star break on Friday at Los Angeles.