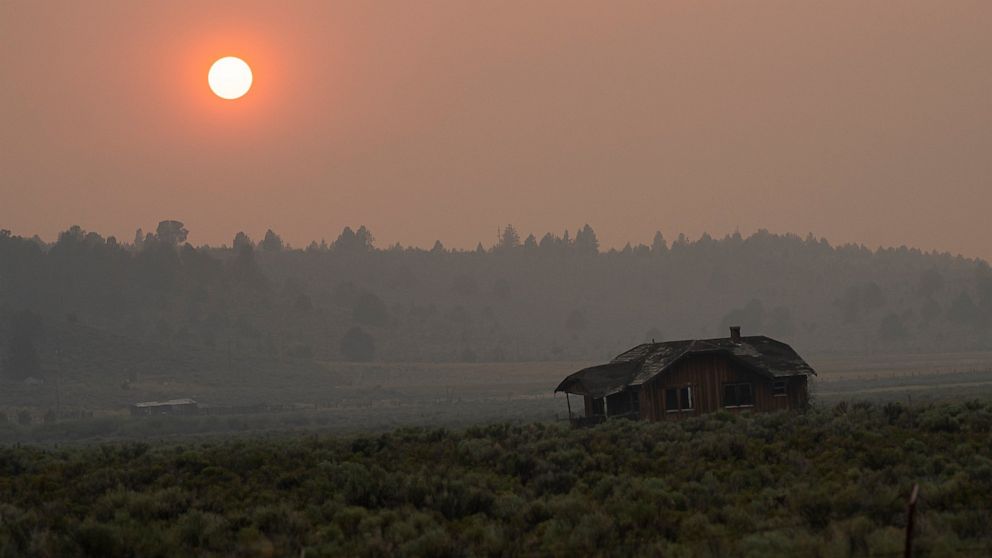 Now, less than a year later, the tribal councilman is watching in horror as flames encroach on the parched lands of other Native American tribes in the Pacific Northwest that already are struggling to preserve traditional hunting and fishing practices amid historic drought. At least two tribes have declared states of emergency amid the devastation.

After last year’s Slater Fire near Happy Camp, California, “We got spread out all over the place,” said Hockaday, who said about 200 homes, including many belonging to Karuk citizens, were burned. “Some people have already sold their property and given up. But the tribe as a whole, we’re trying to build ourselves back and be strong.”

“It’s hard to watch the devastation of what a fire can do nowadays. It’s just crazy — and we just started July,” he added.

Blazes in Oregon, California, and Washington state were among nearly 70 active wildfires that have destroyed homes and burned through about 1,562 square miles (4,047 square kilometers) in a dozen mostly Western states, according to the National Interagency Fire Center.

Extremely dry conditions and heat waves tied to climate change have swept the region, making wildfires harder to fight. Climate change has made the American West much warmer and drier in the past 30 years and will continue to make weather more extreme and wildfires more frequent and destructive.

The Northwest Interagency Coordination Center moved the Pacific Northwest region up to the highest alert level Wednesday — rare for this time of year — as dry, gusty winds were expected in parts of Oregon and new fires popped up.

In California, a fire was rapidly expanding Wednesday in the Feather River Canyon, about 10 miles (16 kilometers) from Paradise, the foothill town largely destroyed by a 2018 wildfire that killed 85 people. State fire officials said the new blaze, which erupted late Tuesday afternoon, covered 1.8 square miles (4.8 square kilometers). There was zero containment of the Dixie Fire and two tiny Butte County communities were warned to be ready to evacuate.

The largest fire in the U.S. on Wednesday was burning in southern Oregon, to the northeast of the wildfire that ravaged Hockaday’s tribal community less than a year ago. The lightning-caused Bootleg fire was encroaching on the traditional territory of the Klamath Tribes, which still have treaty rights to hunt and fish on the land, and sending huge, churning plumes of smoke into the sky visible for miles.

The blaze, which has burned an area larger than New York City, has destroyed about 20 homes and 2,000 more are under evacuation, but much of it was burning in remote areas of the Fremont-Winema National Forest. On Wednesday, the fire was 5% contained.

But even when the flames don’t enter densely populated areas, the impact of the increasingly intense fires around the U.S. West is felt directly by Native American tribes, who have managed the land for millennia.

“We couldn’t do ceremonies because of the fire and our hunting grounds, we could not hunt there,” said Hockaday of last year’s fire. “About 40 square miles (103 square kilometers) of our original territory is closed to us right now.”

Members of the Klamath Tribes in Chiloquin, Oregon, are concerned the Bootleg Fire will affect their ancestral territory as well.

“There is definitely extensive damage to the forest where we have our treaty rights. I am sure we have lost a number of deer in the fire,” said Don Gentry, chairman of the Klamath Tribal Council in Chiloquin, Oregon.

Gentry said although the active fire was 25 miles (40 kilometers) from the tribe’s administrative headquarters, the council declared a state of emergency Wednesday because of its erratic behavior and rapid growth.

“With the severity of the fire, we’re really concerned about where the fire might go from here, so we have a lot of concern about the future,” he said Wednesday.

The Klamath Tribes have been affected by wildfires before, including one that burned 23 square miles (60 square kilometers) in southern Oregon last September. That fire damaged land where many of Klamath tribal members hunt, fish and gather. The fire also burned the tribes’ cemetery and at least one tribal member’s house.

This year’s blaze is another blow for the tribe, which has already seen water levels fall so low in a local lake that federally endangered fish species central to their culture and heritage could not spawn this spring. Farmers who also draw much of their irrigation water from the same lake also got no irrigation this summer as extreme drought reduced flows to historic lows.

Farther north, in north-central Washington, hundreds of people in the town of Nespelem on Colville tribal land were ordered to leave because of “imminent and life-threatening” danger as the largest of five wildfires caused by dozens of lightning strikes Monday night tore through grass, sagebrush and timber.

Seven homes burned, but four were vacant, and the entire town evacuated safely before the fire arrived, said Andrew Joseph Jr., chairman of the Confederated Tribes of the Colville Reservation, which includes more than 9,000 descendants of a dozen tribes.

Monte Piatote and his wife grabbed their pets and managed to flee but watched flames burn the home where he had lived since he was a child.

“I told my wife, I told her, ‘Watch.’ Then boom, there it was,” Piatote told news station KREM-TV in Spokane, Washington.

The tribes declared a state of emergency Tuesday and said the reservation was closed to the public and to industrial activity.

Howard reported from Klamath Falls and Bly, Oregon. Sara Cline contributed to this report from Salem, Oregon. She is a corps member for the Associated Press/Report for America Statehouse News Initiative. Report for America is a nonprofit national service program that places journalists in local newsrooms to report on undercovered issues. Associated Press journalists Christopher Weber and John Antczak in Los Angeles contributed to this report.