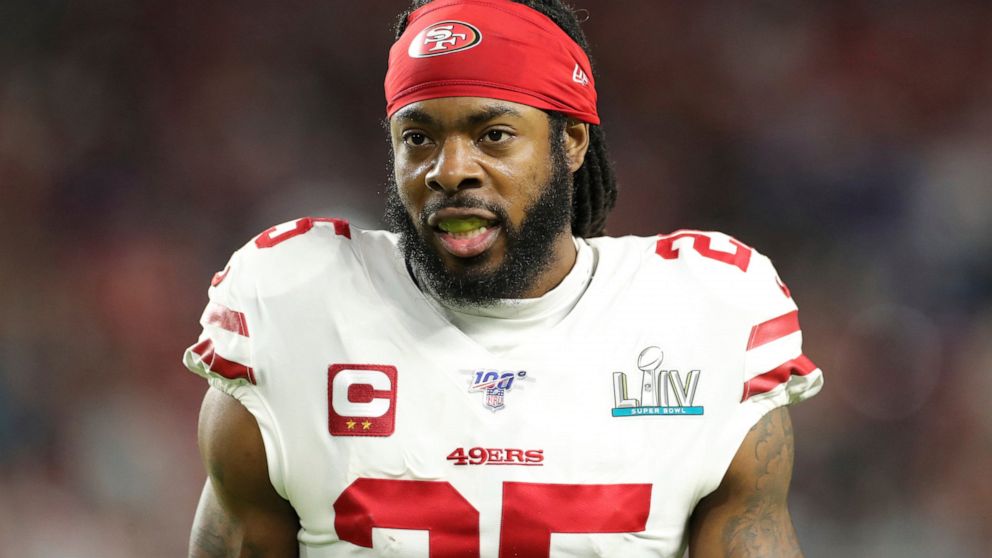 SEATTLE — Richard Sherman’s father-in-law armed himself with a handgun and fired pepper-spray at the NFL cornerback to protect his family as Sherman tried to bust in the door of his in-laws’ home, according to a police statement obtained by The Associated Press.

Sherman was arrested early Wednesday after police said he crashed his car in a construction zone and then tried to break into his in-laws’ home in the Seattle suburb of Redmond.

Sherman remained in jail Thursday and was expected to make an initial court appearance in the afternoon. It was not clear if he had an attorney who might speak on his behalf.

According to the police report, which had not been made public, Sherman’s father-in-law, Raymond Moss, told investigators that the former Seattle Seahawks and San Francisco 49ers star partially broke in the door by repeatedly ramming it with his shoulder. Sherman called out, “Come through, Ray!” in a hostile and threatening tone, Moss said.

“The family began to yell in fear,” Moss told police. “I used pepper spray on Sherman’s face through the partially opened door as he was still banging and attempting to gain entry. I told him to stop. I armed myself with my handgun at this time fearing for the safety of myself and my family.”

Sherman’s wife, Ashley Moss, called 911 late Tuesday to report that he was being belligerent, had threatened to kill himself and was driving away after drinking two bottles of hard alcohol.

“At this time, we’re going to make no statements, except he didn’t harm anybody,” she told The Seattle Times on Wednesday. “My kids were not harmed in the incident. He’s a good person and this is not his character. We’re doing all right, just trying to get him out. I want people to know no one was injured.”

Sherman was booked into jail in Seattle on suspicion of resisting arrest, malicious mischief and residential burglary. The Washington State Patrol said it also would recommend charges of driving under the influence and hit-and-run.

The burglary charge is a felony that includes a domestic violence component because it was the home of relatives. Sherman did not enter the home, strike or try to hit any family members, authorities said.

Shortly before 1:30 a.m. Wednesday, the Washington State Patrol received a 911 call from a construction crew working along a freeway east of Seattle. The caller said an apparently intoxicated driver had entered the closed construction zone. As the vehicle left the area, it struck a barricade, causing significant damage on the driver’s side, Patrol Capt. Ron Mead told reporters.

Just before 2 a.m., Redmond police received a 911 call from the in-laws’ home, reporting that Sherman was trying to break in, Police Chief Darrell Lowe said.

It initially seemed to work, but Sherman’s demeanor changed when the officers told him he was under arrest, Lowe said. He began walking away rapidly and fought as police tried to take him into custody, and a K-9 officer released the dog to subdue him.

Sherman got minor cuts to his lower leg and was treated at a hospital before being taken to jail. At his first court hearing, a judge will determine if there is probable cause to believe he committed a crime.

Sherman, 33, became a Seattle sports legend during seven seasons with Seahawks. The cornerback was a star in their run to a 2014 Super Bowl victory, making a game-saving play to deflect a pass in the NFC Championship Game against the 49ers.

He left the Seahawks after the 2017 season and played three seasons with San Francisco. He is now a free agent.