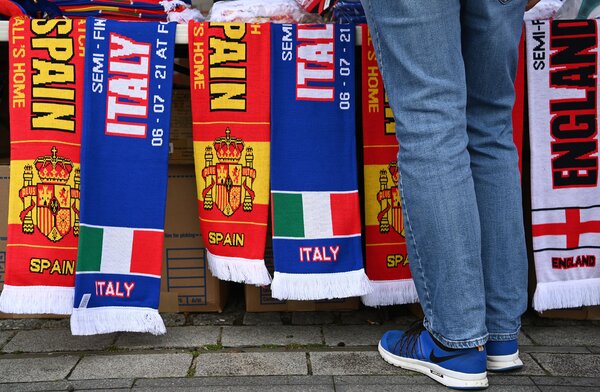 Spain (12) has scored more goals than any team in the tournament, followed by two other semifinalists, Italy and Denmark, who both have 11. England might have the more impressive feat, though: It has yet to allow a goal in five games in the tournament, the only country that can claim that.

Spain’s recent avalanche of goals — five in its final group game, five more in the round of 16 — disguised a problem that had been apparent in its first two games: The team can struggle to score. The Spanish produced only one goal in their first two games, and only one in a quarterfinal against Switzerland despite playing the final 15 minutes of regular time and both extra periods with a man advantage. Spain advanced only after winning a penalty-kick shootout, 3-1. (It failed to convert two of its five attempts but was saved because the Swiss were worse.)

Rory Smith wrote about Spain’s worrisome propensity for goal droughts earlier in the tournament, when he noted that even an excellent passing team needed a couple of pure finishers lest it be “destined to fall short, to get close to the goal but never quite reach it.”

Keep that in mind as you wait to see which Spain will turn up today.

Those countries that succeed in major international tournaments like the Euros are, by and large, those that have most fully embraced the benefits of soccer’s internationalism: the places that have looked beyond their borders for ideas and for inspiration; that have borrowed and adopted best practices, no matter their source; that have learned lessons, regardless of the language in which they are taught.

It is also, though, one of Britain’s great importers: of playing and coaching talent, most obviously, but also of ideas and systems and methods. It is the combination of those raw materials that is then concentrated and combined and sold back to the world as a finished product. That is what has allowed the Premier League to establish its dominance. And it is, now, at last, what has brought England’s national team to the cusp of international glory.

Spain might not be the best version of itself, and it is definitely not the version, at least, that thrashed Italy, 4-0, in the final of Euro 2012. But it still plays a very Spanish style, heavy on passing and possession.

That, as our colleague Rory Smith has noted, can be both a positive and a negative — and it has been both at this tournament. But it will absolutely be the game plan today, Spain’s coach, Luis Enrique, said Monday.

“We’re leaders in the possession stats, but they too are a side who enjoy playing with the ball, so that’s going to be the first battle to win,” Luis Enrique said. “But they’re also very good without the ball. We need the ball. We want to have it.”

Still, history can be a terrible burden, and Luis Enrique has spent some time since the quarterfinals trying to temper expectations for Spain’s current team, which has the youngest average age in the tournament but nothing like the pedigree of its predecessors, who sandwiched European titles in 2008 and 2012 around the country’s only World Cup championship.

“It’s impossible to understate this,” he said. “We’re not an experienced national team.”

It should not surprise anyone that Italy has been one of the toughest teams to score against in the tournament: The Italians often are, and they have conceded only two goals in their five games this summer, and only one from the run of play. (Only England, which has yet to surrender a goal, has been better.)

Much of the credit for that — as has been the case for the past decade — will go to the veteran center backs Giorgio Chiellini, 36, and Leonardo Bonucci, 34. And Italy’s coach, Roberto Mancini, will be relying on them again on Tuesday against Spain.

“It’s been a number of years now that it’s been said that they’re the best center back pairing in world soccer,” Mancini told reporters on Monday. “Their strength is that they want to prove that that is still the case.”

Club teammates at Juventus for much of that time, Chiellini and Bonucci say their familiarity is only part of their formula for success.

“Clearly when we are playing alongside one another we know each other’s game inside out and so things come very naturally to us,” Bonucci said. “So naturally you don’t have to necessarily think about all the other things you have to when you play with someone other than Giorgio, it all comes very naturally.”

Christian Eriksen and the paramedics who helped save his life after he collapsed on the field during Denmark’s first game at Euro 2020 have been invited to attend Sunday’s final in London by UEFA, the tournament’s organizer.

It is unclear if Eriksen or his partner, Sabrina Kvist, who was also invited, will attend Sunday’s final at London’s Wembley Stadium, but at least one of the paramedics said he would go to the game, which might include Denmark — one of the biggest surprises of the tournament.

Eriksen has spent the tournament mostly out of public view since his collapse, appearing in a photo from his hospital bed three days after the incident and in another this week taken after a chance meeting with a young fan.

Eriksen was rushed to the hospital on June 12 after his heart stopped and he needed life-saving treatment on the field during Denmark’s opening game against Finland at Parken Stadium in Copenhagen. “He was gone. And we did cardiac resuscitation. And it was cardiac arrest,” Denmark’s team doctor said at the time.

One of the paramedics who helped save Eriksen’s life, Peder Ersgaard, told the Danish magazine Fagbladet FOA that he and other paramedics had been invited, and that he was excited to attend the game.

Denmark faces England in a semifinal on Wednesday at Wembley.