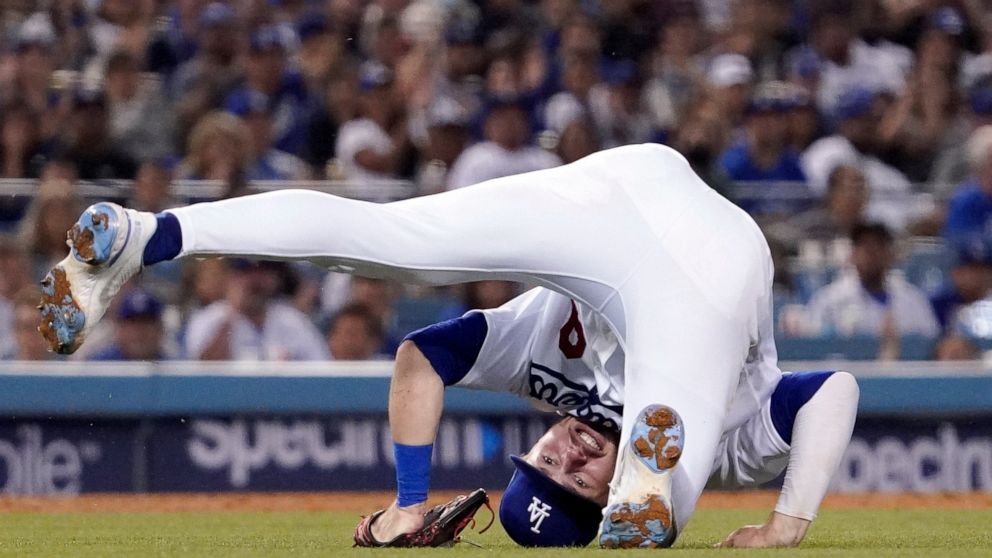 Eduardo Escobar hit his 20th home run of the season and the last-place Arizona Diamondbacks pinned another loss on the Dodgers, beating Los Angeles 5-2

The Diamondbacks, with the worst record in the majors, have won three of four. They’re coming off a successful trip to Colorado, their first series win since May 2.

The Dodgers have lost four of five. Los Angeles didn’t help its cause with a lackluster offense that produced just five hits, a shaky defense that made two errors and a combined pitching performance that issued seven walks and hit two batters.

Escobar’s two-run homer in the fifth put the Diamondbacks ahead 3-1. He connected off Darien Nunez, a 28-year-old lefty who made his big league debut.

Dodgers reliever Edwin Uceta walked three batters in the ninth. Dalton Varsho drew a walk with the bases loaded to make it 4-2 and Los Angeles then turned to Jake Reed, who walked Josh Reddick to score another insurance run.

Arizona’ starter Tyler Widener was solid after coming off the injured list with a groin strain. He pitched 4 1/3 innings, allowing one run on three hits. He struck out three and walked just one. His lone mistake was to A.J. Pollock, who hit a solo home run in the third.

“I felt really good the first four innings,” Widener said. “I got a little tired there in the fifth. Good foundation for me to build off and excited to keep going forward.”

The Diamondbacks even left 14 runners on base, but that didn’t matter.

“We executed at a high level and when we do, we’re a good team,” Arizona manager Torey Lovullo said. “We did a good job with our approach. We created traffic all night, from the first inning on. In the ninth inning we were able to give ourselves a little cushion.”

David Price did exactly what Roberts wanted as he pitched three scoreless innings to start a bullpen game for the Dodgers. In the first inning, he loaded the bases but got out of the jam by striking out Asdrubal Cabrera.

Price threw 55 pitches, and he said he still felt good. Asked if Price is in the starting rotation, Roberts said that was a “fair assumption.”

Said Price: “Whatever these guys want me to do, I’m willing to do it for them. Starting is obviously something I’ve done for a very long time, but I’ve also enjoyed being in the bullpen as well. Whatever is asked of me moving forward, I’m all for it.”

Dodgers: LHP Clayton Kershaw (left elbow) had an MRI that revealed “just inflammation,” according to Roberts. Kershaw is expected to play catch on Saturday … RHP Jimmy Nelson (left lumbar strain) was placed on the 10-day IL retroactive to July 7.

Diamondbacks: LHP Caleb Smith (2-5, 3.45) allowed five runs — including two homers — in six innings in a loss to San Francisco in his last start.

Dodgers: RHP Walker Buehler (8-1, 2.49) had a no-hit bid broken up in the eighth inning against the Diamondbacks three weeks ago. A single from David Perralta ended the try.